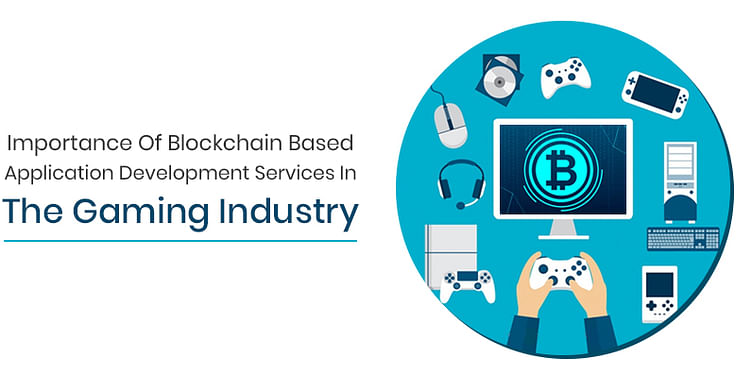 The blockchain technology is definitely here to stay as it has been a weapon which various companies and sectors of the economy are looking to build to their own custom-fit order. The blockchain technology which basically preaches the decentralization of transactions or processes brings to the table a new way to process data in such a way that they do not have to go through any third-party and ensuring that all transactions are genuine and processed properly.

The gaming industry is also definitely ready to take on this weapon of mass development and growth in creating new changes in the way transactions are made, as well as the power players have over their in-game value currencies. The introduction of blockchain technology can provide lots of solutions for the gaming industry, as it will offer gamer a more decentralized and transparent way to engage with their games and in-game assets. Some experts predict a tremendous change being caused by the blockchain technology in the near future which will change gamer experience all for the better for it.

Over decades, the gaming industry has seen lots of growth and development by the revolutionary introduction and improvement of new technologies like the Artificial Intelligence (AI), Augmented Reality (AR), and Virtual Reality (VR) all of which offers engrossing gaming experiences. Blockchain application development which seems to the next big thing in the tech industry may cause huge disruptions in ways developers and gamer associate and access their games and the digital assets, mostly infirm of Cryptocurrencies attached to it.

IMPORTANCE OF BLOCKCHAIN TECHNOLOGY IN THE GAMING INDUSTRY

- HIGHER LEVEL OF SECURITY FOR GAME AND GAMER:

With transactions made in video games worth about $50 billion and counting, the blockchain technology can help curb the illegal trading of digital assets online as well as controlling the black markets. The distributed ledger makes it impossible for hackers to steal information through the powers of an immutable ledger. This means that information on the ledger cannot be copied or edited without proper identification. In the old times when gamer would pay high prices for in-game options only to find out that pseudo copies have made it worthless or that they had gotten an illegal copy themselves, blockchain can prove true ownership of digital assets through its distributed ledger. The introduction of smart contracts also will make players more confident in transacting with video digital asset. They are sure they will be getting original gaming items that are not pseudo.

The advent of blockchain technology will put gamer in full control over their digital game assets which earlier were only stored as data in the game developers server. This also means that the assets cannot be used outside of the game. Some gamer play with digital asset as incentives.

The future of gaming with Blockchain will definitely create a tool where gamer can make use of the decentralized workings of the blockchain technology to connect with each other and even transact their digital game assets within each other thereby encouraging a more social-friendly environment in the game.

Payments can be made seamlessly by gamer to make in-game purchase. Gamer also can make payment via other means without necessarily using their credit card. They will also be able to pay in a bit which normally will be discouraged by the game developers due to the huge cost of processing payments of bit transactions.

Players will also have the option of sitting their in-game asset on any secure wallet type they deem fit, either a hard wallet like Trezor or Ledger Nano S, etc.

To properly improve all of these propositions Blockchain technology has to offer in the gaming industry, it is important to look into the possible loopholes that might be a problem to developers scaling their gaming products and gamer enjoying their experience.

LIMITATION OF CREATING GAMES WITH BLOCKCHAIN:

Another problem with the adoption of blockchain in the gaming industry will face network speeds which are not fast enough, and as a result, lots of blockchain-based games have become an image of mobile games. Blockchain developers are aware of this obstacle, and projects are being carried out to fix the problem. For example, Decentralized, a virtual reality platform which has saddled itself with the goal of developing more appealing blockchain-based games.

The global gaming sector is massive, it is expected to have projected revenue of US $ 143 billion by the user 2020. With the adoption of blockchain technology in the gaming industry, the numbers could go up by 25% and steadily increase over the years as users being to get accustomed to the technology and game developers too not dropping their A-game on continuous research and development about how to get even better again. There is yet an off the shelf use of Blockchain technology in the gaming industry. It, therefore, a call into developers who know what they're up to the task and can take gamer breath away with the integration of the technology into their product while considering and planning for his to scale the growth of the product over time. Developing a blockchain application for the gaming industry should be done by taking the help of blockchain application development company who knows their insights and can tell what and what not to do while acting as a guide through the entire application development stage.