iOS or Android: Which Operating System Wins the Battle? 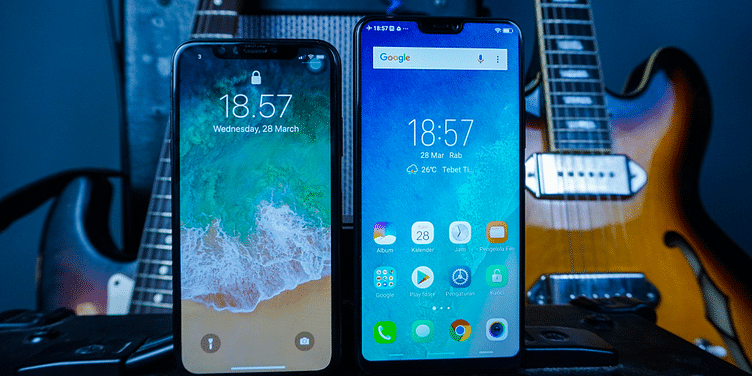 But which operating system really wins over the other? It’s a hard call to make, and I think we don’t have a clear winner. Android has a significantly larger market share, considering that a couple of companies are using Android on their phones. Apple, on the contrary, has a smaller but consistently maintained market share globally. You’ll find dozens of Android phones, falling in wider price bracket, but a couple of iPhone that aren’t ever affordable.

I am going to explore the two operating systems from various perspectives, and by the end of this article, you will know which one wins you!

Android users love their devices for several reasons, and here are some of them:

Focus on the Looks

The competition is pretty tight in the Android market. We have some key players, including Samsung, Huawei, Oppo, QMobile, Sony, Motorola, HTC, and others. The manufacturers ensure that their phones stand out in the crowd with their good looks. You’ll easily find smartphones with large screens, sleek buttons, glossy and matte covers, stereo speakers, and more. Android is not rigid about its looks and features, unlike iOS.

You can easily find a phone that best fits your style with double-sided displays, wireless charging, curvy screens, and whatnot.

Android and Google are the forever-best friends! Although Google’s services are available on iOS as well, because it makes money by selling advertisements, but nah. The services aren’t as great on iOS as on Android. If you are someone who is comfortable with Google, then Android is your best friend too. Also, Google Assistant is of great help in managing your schedule, reminding you of daily tasks, and controlling other home products.

Let’s say, you’d still use Google Chrome and Google Maps on your iPhone, then you should instead get an Android.

Android phones and their accessories are pretty affordable. You can easily find a bunch of cheaper versions of chargers, earphones, mobile covers, and other covers. Also, the repair and maintenance of Android devices are significantly lower than that of iOS devices. You’ll have a mini heart attack in case your iPhone drops on the floor.

Here are a couple of reasons why people are staunch believers of the iOS operating system:

Apple releases all its new phones in September every year. So, an iPhone user knows that the current iPhone version will be the leader till September, which eliminates a sense of insecurity otherwise present before investing a hefty amount. On the contrary, an Android user is continuously threatened by new Android phones launching every other day. Also, all iOS devices get software updates at the same time, so an iPhone 7 user gets the same features as an iPhone X user unless the features are dependent on hardware.

Apple has strict policies and procedures for mobile apps, and only high-quality apps make it to the Apple App Store. Although Android apps are also pretty decent, but iOS apps win in terms of designing and features. Also, the creativity of iOS apps is unmatched. One of the reasons for Apple’s edge is that iOS users are more willing to opt and pay for paid apps than Android users. Therefore, app owners are not reluctant to invest in finding the best app developers, as the costs are soon recovered by paid downloads. Android users, on the other hand, look for free apps, so a compromise on quality is always on the table.

The cross-device syncing of Apple devices is beyond brilliant. Users can take phone calls, reply to messages, and check notifications on their other iOS devices without downloading any other app or software. For example, if your iPhone is on the charge, you can use your tablet and do your work. Also, you can open an article on your iPhone or web page right from where you left it on your tablet. The hardware-software integration by Apple is unmatched.

Apple has a couple of products using the iOS software, which means there are only a few screen resolutions, hardware capabilities, and processing power. The overall experience amongst all iOS users is pretty much the same, unlike for Android users. There are new versions of Android devices launching every now and then. The Android devices run on different versions of the operating software.

iOS and Android each have their own pros and cons. You have to make a choice based on your preferences. For example, if you are someone who loves downloading open-source apps and download and documents on your phone, then iOS isn’t your game. But if you a phone that lasts a couple of years and does not make you feel outdated, then iPhone will be your friend.

In the following section, I will compare iOS and Android from different perspectives, such as battery life, security, and other factors.

Prioritize features that are most valuable for you and see which operating system best fits your preferences. It will enable you to buy a phone that you won’t regret.

Who is a Winner?

Again, we don’t have a clear winner. iOS performs better in some aspects, while Android takes the lead in the other. Now, which one to buy yourself? Here is the deal. I am going to list down the winner in some categories, and you decide which one is better for you.

I am all about security. I don’t want anyone to hack my accounts, and even when lost, I want my data to be safe and inaccessible. But my sister loves customized screens and downloading just any app she wants. We will never like one phone!

Security – iOS is the Winner

iPhone is, of course, securer than Android phones. The open-code nature of Android devices attracts viruses and malware. A simple app that you downloaded for wallpapers can bring a lot of vulnerabilities to your phone. Even small modifications in apps can leave security holes.

On the contrary, the source code for Apple is never released. iOS apps with any technical issues or security glitches are shut down by Apple. Also, Apple has a tighter control on the apps, as it owns both the software and hardware.

Not that iPhone does not face security risks, but the stats are significantly lower than that of Android devices.

Voice Assistant – Android is the Winner

Google Assistant makes me hopeful about the future of Artificial Intelligence. It literally controls almost all the devices you use. For example, it controls smart home products, like television and music systems. It reads news headlines and keeps you updated from reliable sources. Google Assistant briefs you about today’s tasks when you wake up. The assistant is a life-saver, helping users with Google Maps, Google Calendar, and whatnot. It tells you to leave early or follow a different route in case of heavy traffic.

Siri is more of an entertainer and helps you with basic stuff, like finding routes for you. You can’t call Siri an assistant.

Appearance and Beauty – iOS is the Winner

iPhones are sleek and quite pretty if you ask me. Apple pays a lot of attention to aesthetics, and the efforts are clearly witnessed. Conversely, some Android phones are good-looking, while others are bland. Some Android phones are positioned as affordable and play on the price of the phone. So, of course, little attention is paid to the looks. High-end Android phones, however, are good-looking. Apple’s products are luxurious, and so is their price tag. You cannot expect a device of such value to be anything but beautiful.

Battery Life – Android is the Winner

Unfortunately, iPhones require frequent charging, often twice a day. Most Android phones survive the day with one full charge. Android has been generous in placing capacious batteries in the phones, supported by larger phone sizes. Apple’s love for thinness keeps it from expanding the battery life of its devices. Apple is criticized for its battery life, but it’s still not paying much attention. It made global news when Huawei, a Chine mobile manufacturer, distributed power banks amongst people queued up to buy iPhones, targeting the low battery life of Apple products.

Cameras and Video Conferencing – iOS is the Winner

Facetime is one of the unbeatable aspects of iOS devices. It is the simplest and the most convenient video conferencing platform I have ever come across. Simply unrivalled! Google Hangout is nowhere close to the greatness of Facetime. Maybe I am exaggerating a little, but Facetime is super convenient!

Well, even Android phones have decent cameras, but iOS features innovation and excellence. Apple goes above and beyond to deliver the best camera lens, and every new iPhone comes with something new in the camera. iPhone pictures are more on the as it is side while Android images are a little yellowish and automatically hide acne marks, discoloration, and other such elements. However, some people find Android cameras better.

Peripherals – Android is the Winner

We have already talked about the standard USB port in Android. You can charge all Android devices with the standard charger, which means your family can travel with one charger if you all own Android devices. The accessories are cheaper for Android than for iOS. Also, because of the standard ports, Android devices are supported by almost all the gadgets. iOS, on the contrary, requires optimization.

However, you might not find phone covers and other accessories for your Android device, if it is a new launch or not a famous variant. There are only a couple of iPhones out there with pre-launched features and specs. So, by the time an iPhone is launched in the market, the manufacturers are ready with a couple of accessories.

I hope I haven’t missed any important point in comparing the two operating systems. It drops down to the fact that each operating system has its own pros and cons. Now it is up to your preferences and requirements that shall decide which one is a winner for you.

Android has a larger market share for obvious reasons. There are a bunch of android app development companies working on crafting innovating apps. Its mobile phones range from luxurious high-end phones to super affordable versions. It offers extensive customization, with a number of color variants available in the market. So, if you are a fan of yellow, Android has various phones for you to choose from. iOS, conversely, has expensive phones, with a few color choices.

Also, I have personally observed that very few iOS users shift to Android phones. But Android users do not have such resistance towards iPhones. The reliability and security of Apple’s operating system are some of the major reasons for the adoption of iPhones.

Let me know your opinion on iOS and Android operating systems. Did I miss something?