React Native vs Flutter - Which is the Best Framework for my Mobile App? 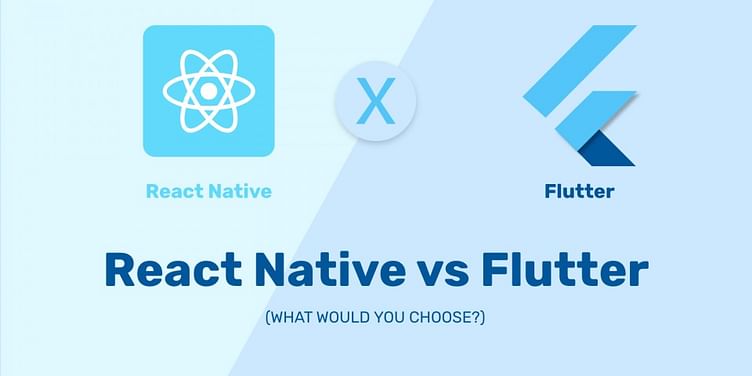 In our previous blog, we learnt in depth about React Native, a cross platform development framework for designing mobile applications. Another accomplished contender of React Native is Google Flutter. Flutter created by Google, is an open source,platform independent framework that enables creation of beautiful UI for mobile apps on multiple platforms.

The React Native vs Flutter war is an ongoing one. Several factors like Flutter vs React native performance, differences in the UI/UX, cost, time, resources etc have to be considered before choosing the required framework for your project.

This article will help you understand the difference between flutter and react native despite having many similarities.

It is based on React.js, which is a JavaScript library designed to build user interfaces. JavaScript enjoys immense popularity and is a widely used programming language, with nearly 70% of developers having worked on it at some point of time. This is a huge advantage for React Native, as JavaScript developers are plenty in the market and learning React Native for them is very basic.

Flutter works on a completely new programming language called the Dart, which is not used extensively outside Google. Although, learning and writing codes on Dart is very easy, it still comes with the task of learning a new language and acquiring the necessary skill set.

Who won ? Flutter vs React Native : React Native clearly seems to have an upper hand over Flutter, all thanks to JavaScript.

Flutter uses its exclusively owned sets of visual and interactive widgets for designing the UI. These are built-in UI components and help create a very flexible and user-centric interface.

Being the predecessor, React Native has been around in the market for a substantial amount of time. Also, having JavaScript under its hood, as its programming language, is a huge perk. With readily available reusable components and its super flexible UI, React Native takes considerably lesser time to develop projects. It has consistently emerged as a reliable cross platform mobile application development framework.

Flutter is relatively new and is yet to reach a level where it can be easily recognized and adopted. The development time taken to complete a project is comparatively higher. But, it is slowly making its way up there and is gaining credibility.

Who won ? Flutter vs React Native : React Native,obviously, takes all the credit because of its longer market presence and reusability.

React Native depends on the JavaScript bridge and native API’s to communicate with the native OS components. Hence, it takes more time in terms of performance speed and running apps.

While Flutter doesn’t have to navigate through any intermediate bridge, its performance is comparatively faster than React to create the apps. The Dart code is instantly converted into a native code, thereby speeding up the process and improving performance.

Below is a Google Trends survey depicting Flutter vs React native performance.

React Native vs Flutter - Which is the best framework for my mobile app?

Based on the above statistics and data, React Native, indisputably, appears to be the stronger contender of the two. Flutter is gradually paving its path to get to the top, has Google’s backing, and certainly has a bright future, but has a long way to go.

Blockchain Simplified is a Top blockchain development company in Pune - India which works on all major Blockchain requirements. We specialise in Blockchain, Web and Mobile development (One Stop Shop for all technology development needs).

Our clientele includes Multiple Funded Start - Ups, SMBs and few MNCs few of which are NASDAQ and NSE listed.

Some of our work includes,

hubrisone.com - is a Live app with 100,000+ downloads, All-in-One Cryptocurrency current account. The entire development from scratch carried out by Blockchain Simplified.

All in one Platform - Complete responsibility of entire software development of the platform ,for a $1m funded blockchain start up, led by a team of serial entrepreneurs and tech veterans in Silicon Valley.

SHC - Built entire platform and app from scratch for a $1m funded startup led by a team of Americans including PhD degree holders.

VMW - Developed app for a multi-national company providing mass factory-to-factory shipment services. App is being used by 53 of the Fortune 500 companies such as John Deere, Coca-Cola, Nissan.