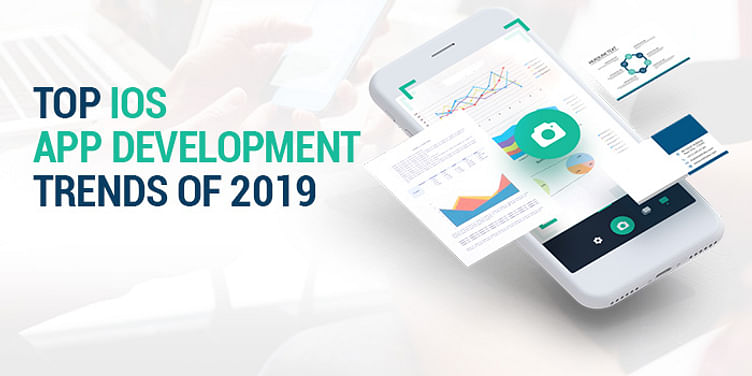 With four months in its bag, 2019 has been an interesting year so far. Digital innovations have been popping up all over the place since then and Apple is paving a benchmark by putting forth tough competition for other popular brands such as Samsung and OnePlus.

Mobile solutions are easing the lives of people one day at a time and are now, as convenient as they can get. Leading the bandwagon of mobile app technologies, Apple has been unstoppable since the inception of 2019. Envisioning new trends that are being released every day, Apple has now carved a name for itself as a haven for the best mobile apps, iOS apps to be precise.

Let's discuss about the latest top 5 iPhone App Development trends of 2019 to get a better understanding of why Apple's iOS technology is the future.

With a promised business boom for your business in the many years to come, iPhone apps have time and time again proved their mettle in the app development industry.

As of April 2019, Apple's App Store features over an astounding 2.2 million mobile apps where over at least ten of Apple's most popular mobile apps each have over 100+ million app downloads to their name. Facebook, YouTube, Snapchat, WhatsApp and Instagram are among ten of the most iPhone applications of all time!

The average cost of an iPhone app in the App Store of Apple ranges as less as $0.50 which does indicate one thing - iOS app developments are gritty technological amenities that win hands down over Android solutions when it comes to money matters.

When Apple launched iOS 11 two years back in 2017, it introduced the concept of Augmented Reality (AR) to all the iPhone app developers out there. As Apple's ARKit framework is infused with powerful technology, iPhone developers will now enjoy exploring wide potentials with AR.

Apple's ARKit framework's recent developments also include an AR interface that can adeptly interact with the newly displayed MAP employed by newer patent applications - Apple Maps makes it simpler for iPhone users to navigate with ease to or around unfamiliar locations.

The reach of mobile applications is wide and in most cases globular. As a reason, the mobile app development industry has to focus largely on app security. Apple shifted its attention to app security to build a stronger, viable audience base of iPhone users who would preferably enjoy the secure features that Apple has to offer - It's near impossible for hackers or attackers to breach the security of the apps.

All new apps on the App Store are now more secure as Apple has termed the App Transport Security (ATS) as an obligatory feature. Just like every other year, 2019 is also looking to be the year for Apple as iOS apps are only enhancing their compatibilities with time.

Marking its inception in the iOS market in 2019, Swift 5.0 is all set to introduce fantastic updates for iPhone users and all iOS app developers will advantage equally from it.

The latest version of Swift 5.0 has adopted more stable technology for its Application Binary Interface (ABI) to provide iPhone app developers better embedded mechanisms for the Swift libraries in runtime.

Owing to these advancements in Swift 5.0, iOS app developers will also opt for Swift to develop new iPhone apps in 2019.

The market sales for Apple smartwatch reached an all time high in 2018 marking a huge volume in business and clocking around a number of 3.5 million smartwatches to be sold in the second quarter alone.

The popularity is a clear indication that iOS app developers need to equip themselves for mobile app technology for Apple smartwatch - The recently launched WatchOS 5 is a boon for iPhone app developers and is packed with powerful mechanisms of Siri watch face and audio controls to elevate the complete user experience.

As more people have embraced mobile wallets, it is safe to say that the age of m-Commerce is upon us. Multiple apps on the App Store currently require payment gateway integration or premium versions that validate in-app purchases that will be available on both iPhone and iPad app development services when an iOS user integrates a digital wallet in the form of Apple Pay.

Apple Pay wallet is basically a secure digital wallet that allows multiple payments for all the mobile applications on various devices such as the iPhone, iPad, Apple Watch and MacBook where users can safely store all bank/card details.

The amazing trends of iPhone in 2019 are enough to prove the million unexplored possibilities one can achieve with a powerful iPhone app. iOS app developers from India are highly in demand as iPhone apps are the one-stop solution for enterprises looking to up their business on a digitally-armoured global scale.

Vrinsoft Technology believes that iOS integrated iPhone applications are the future of mobile technology and will pave a way for multiple enterprises to achieve maximum business progression.

The startup curve: Journey of an entrepreneur