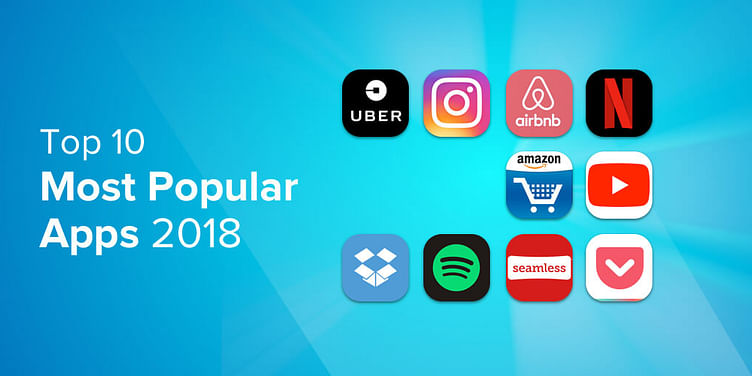 Mobile apps have been the center of innovation for quite a few years now. With the ever-growing market and upcoming modern technologies, it’s very hard to stay relevant and competitive. As per comScore’s yearly U.S. portable applications report, 57 percent of Americans spend more than half of their digital media consumption time on mobile apps.

If businesses want to acquire good engagement from mobile, they need to develop their own apps and offer a unique user experience. Given the present state of the digital world, there are several apps being released every day on play store and app store.

Unfortunately, most of these apps fail, some of them fare mediocrely, and only a few of them stand out from the crowd by being unique and useful to the users. And, these outstanding apps are the ones that bring about a revolution.

To help you ensure your mobile app initiative is among the ones that are a success, we have gathered the most brilliant mobile apps that deserve awards. Businesses that aim at mobile app development in the future, must have a look to have more clarity.

Uber is the world’s leading on-demand cab service app for riders, which is being used by more than 8 million people in 400 cities across 70 different countries. Uber is a technology-based platform that connects together the riders and the drivers.

The app helps the riders get a ride without having to wait much. By incorporating Google Maps into their apps, they show the user where the pick-up point is located, where the cab is located at the time of the booking, and its estimated time of arrival (ETA).

The app service has made the payment mode very easy by including (apart from cash payment) payment gateways linked to the user’s credit or debit card and mobile wallets. Moreover, after every ride, both, the driver and the rider, get to rate each other and share their feedback.

Price: Paid as per ride

Instagram gives people an easy way to connect with other people through images and videos, and by using the right kind of hashtags. In fact, it is recommended that you use hashtags as this increases your followers too. Instagram’s prominence has been developing relentlessly since it first appeared in 2010. The app presents a spectrum of opportunities in social media when it comes to digital marketing through ads and tools.

With more than 500 million active users, it is much more powerful as compared to Facebook and Twitter. If we look at the facts, Instagram posts get 58 times more engagement than Facebook and 120 times more than Twitter. Marketers are falling in love with the platform as they always look for better ROI for their business.

Airbnb is a booking app that can help you with planning your holidays better and offers certainly better accommodation alternatives than hotels. Also, if you have extra space in your home and you want to offer it for tourists, Airbnb can be your one-stop solution. Airbnb came up in the year 2012 and was very popular 2016.

With the help of technology, Airbnb built an exceptionally user-friendly app that increases the ease of doing transactions. It even took the pain out of searching and booking accommodations.

Price: Paid as per booking

Netflix is a subscription-based video-on-demand app. It is the world’s foremost subscription service for users to watch movies and TV shows on your smartphone. This mobile app provides the best experience anytime anywhere. A majority of millennials find Netflix better than any other video-on-demand app, which gives a wide variety of movies, shows, and genres to choose from.

Pricing: Free for the first month and paid (starts at $10.99) for premium membership

Amazon is the most prominent eCommerce platform around the world. Amazon, with the help of the Internet, creates real value for customers focusing on a wide variety of things they’re looking for. This, ultimately, results in more sales. The app is light as well as fast to use. It enables you to search and filter an extensive variety of products on different parameters with only a few taps.

It offers multiple payment gateways for simple checkouts and you even get the latest updates about your order status. With the help of localization, users can likewise benefit from the offers from nearby local businesses.

Pricing: Paid as per orders

YouTube is considered as the world’s most famous video platform, for the people and by the people. It helps millions of creators around the world to add and share their unique content with the target audience. It attracts millions of viewers to watch whatever they prefer to. As per wordstream, 25% of YouTube’s traffic is generated from mobile, and mobile video views have increased 300% since 2012. Even Google has profited (and is still profiting) from YouTube, through video ad revenue.

Dropbox is a reliable and well-designed cloud storage app that functions admirably on multiple gadgets. It helps in sharing files within the team or clients. You can even comment on documents you have shared with other people, and browse everything that you have stored online.

They have implemented many growth hacks to acquire customers. Dropbox has received many awards, which includes the best overall startup for 2011 and Macworld`s 2009 Editor’s Choice Award for Software. This is quite similar to Apple’s iCloud Drive and Google Drive. You can upload images from your smartphones automatically and store them in Dropbox.

Price: Free to download; has a free version and a paid version as per add-ons.

Spotify is known as the best music streaming app with unique features. The app has ad-supported free version features, whereas a Spotify premium membership removes ads and gives additional features like offline mode for songs download when you are unable to stream.

Spotify was opened for a limited number of users in Europe in 2008. Only those with a paid subscription could access it. Then, Spotify was launched in the U.S. for all listeners in 2011. As per bbc, Spotify app is used in 61 countries, has 159 million active users and a library of 35 million songs. The app is now grown to be the biggest streaming platform in the world.

Price: Free; has a per month optional subscription charge

Seamless, known as the best food ordering app, enables users to order food online through their smartphones. Seamless is a part of mobile food ordering company GrubHub, where users can order from around 35,000 restaurants in more than 900 cities.

Seamless food ordering app stands unique as it creates value by offering food a wide variety of restaurants to their customers. Their order placement process is simpler and more user-friendly as compared to other apps.

Pocket helps you save and share things such as videos, articles, emails you come across on your smartphone to come back later on with a browser bookmarks. The app enables you to download the stories in a clean, effectively readable interface for offline reading. It even reads content to you in a Siri-like voice.

You can also share articles, including comments with other Pocket users. The app learns what you like to read, and based on your searches, recommends more articles that may interest you. It is considered as the best productivity app because it helps in keeping a track of your content on a daily basis.

So, these were the most brilliant apps that not only brought revolution to the online industry but also became the most successful ones.

Which one is your favorite? Do let us know in the comments section given below.