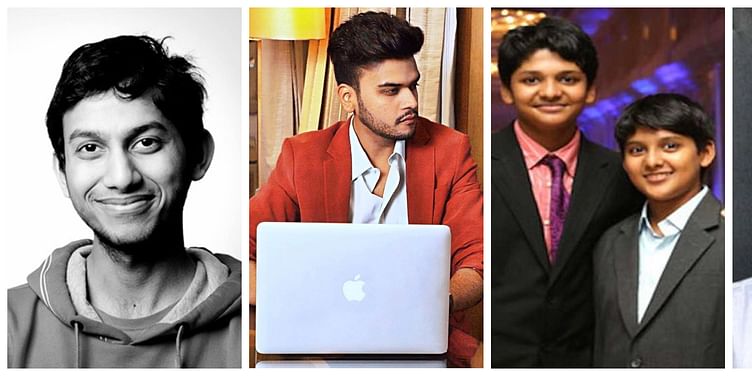 What is the decisive factor that separates generation X from generation Y? The answer would be entrepreneurship, i.e., the idea of turning a solution into a possible business idea. It is this quality of turning a solution into an innovation that differentiates a common man from an entrepreneur. And entrepreneurship seems to be the way to success in the present times. With countless podcasts, YouTube videos, self-help books filling up book shelves, being an entrepreneur has never been this in demand. People are increasingly looking for potential ideas that would transform their idea into an everyday service or a commodity.

While the search for the perfect ingredient for being a successful entrepreneur is on, there are quite a few Indians who have already found out the recipe for their success. Most of these entrepreneurs are young and have garnered an impeccable quality of responding remarkably to any adverse situation. These young representatives of entrepreneurship have shown that there is no set formula for success. Their background, age, degrees and social circumstances are a testament to this statement. Their invincible spirit and their ability to foresee their talents into an economic churning idea, i.e., the ‘entrepreneur mindset’, are the qualities that let them scale even greater heights of success than the others.

Mentioned below are 5 such young Indian entrepreneurs who are all set to be big social influencers in 2020:

The genius of Ritesh Agarwal is the reason why thousands of Indians now have access to affordable stays. Ritesh Agarwal, the founder of OYO Rooms, came up with the idea of a budget hotel chain with a bed and breakfast feature when he was just 18. He soon dropped out of college to carry this idea forward. He founded the start-up Oravel Stays Pvt. Ltd. which soon became OYO Rooms, a national sensation. What started as an initiative with only 11 rooms in a Gurgaon Hotel in 2013, now has over 65000 rooms across 170 Indian cities spanning over 5500 properties.

Ritesh’s journey to success is one of the most influential entrepreneurial journeys in India. Being an ardent traveler himself, he understood the need for budget accommodation for Indians with standard amenities. Ritesh’s story is a living proof of how a teenage mind can change the face of the Indian hospitality industry with a moving concept.

Vishal Jain is one of the most successful digital marketing experts in the country. While the youth of his age were busy getting a college degree and placed in a company with a fixed pay package, Vishal dreamed to make it big. It was this very dream that drove Vishal to drop out of college and venture into the digital world to find his calling of becoming a social media marketer. What makes Vishal’s success story more influential is its relatability. Vishal felt stuck to the confines of his hometown and had dreams to explore more and take risks in his life out of the hunger to learn more. Thus, he was never a fan of being an employee of a company as that would give him very little scope of exercising his creative prowess. So instead, he founded his own company called Sunshy Group of Companies, after realizing the potential of driving businesses through social media.

Vishal is also a founder of another establishment called ‘Journey to a Million Dollars’. This is an international endeavor that coaches young and aspiring entrepreneurs to make their breakthrough in the digital space by starting their own digital agency. These are not all. Vishal has more achievements up his kitty. Apart from working and contributing to digital marketing, Vishal is also the creator of the projects ‘Client Takeover Program’ and the ‘Digital Entrepreneur Community’. He trains digital marketing entrepreneurs and provides them with the required resources on how to expand their businesses online through unique marketing skills and to make profits out of their passions.

At 23, Vishal Jain is the epitome of hard work, resilience, and fearlessness who ventured out of his comfort zone to achieve the impossible. He sits prettily at the top with his social marketing skills and lives each day to conquer unknown territories through his entrepreneurial abilities.

3. Shravan and Sanjay Kumaran, 18 and 16, President and CEO of Go Dimensions:

These teenage siblings have been in the news for the last few years for their innovation skills. At 18 and 16, they are the youngest Mobile Application developers in the country and are in the contention to become the best entrepreneurs in the upcoming year. The brothers are the founders of the start-up company ‘Go Dimensions’ which develops mobile applications for both the Android and the iOS platforms. The boys share a common motivation of helping out people with simple technological solutions that can be accessed readily. Recently, they developed an application called ‘GoDonate’ that aids in the donation of leftover food to the needy people which would have otherwise ended in the trash. Social contribution is a big driving factor behind their own projects which are funded by their own father. On being asked about how they could do so much at such a young age, they accredited their prowess to books and finding solutions to problems given to them.

Sanjay and Shravan Kumaran wish to see their apps being used by people throughout the world. They have started their journey towards achieving their goals as they have already designed over out 11 apps that have a record 60,000 downloads across 60 countries of the world. They were handsomely facilitated for their achievements in 2017 when Forbes included them in the list of ‘Forbes 30 Under 30’.

Farrhad Acidwalla is the founder of a Web Developing Media Firm called Rockstah Media. His company helps in web development, advertisement, marketing, and branding. Rockstah Media is just over a couple of years old and it is already handling clients across several countries with its team of developers, designers, analysts and market strategists places throughout the world. But what really makes the man stand out from others is his perseverance and his ability to overcome hardships.

Farrhad’s entrepreneurial journey started when he was just 13 years old with the building of an online community with just 1200 bucks. And then with 500 bucks, he bought an online domain. And such was his vision and charisma that he was already attending interviews and talk shows on CNN when he was just 17 years old! Farrhad has now successfully climbed the ladder to become one of the most sought-after young Indian entrepreneurs in the present times and holds the prestigious honor of being the youngest guest lecturer in IIT Kharagpur’s ‘Annual Entrepreneurial Summit’. He has also voiced his story, his philosophy, and his inspirations by being one of the elite speakers of TEDx.

A name to reckon with, Sreelakshmi Suresh, has received tons of national and international awards for her achievements. She has been a go-getter since her childhood and designed her first website when she was just 6! She was fascinated with computers since she was just 3 years old and at 21, she is the youngest CEO and web designer in the world. She is also the founder of a web designing company called eDesign, which delves into SEO services, web design, and various other web-related services. Sreelakshmi came up with the idea of eDesign when she was just 10 and has designed over 100 websites for well-acclaimed institutions and organizations all over the country. She is currently completing her education and aims to design more than 100 websites in a span of just a year. In the list of the young achievers, Sreelakshmi breaks the monotony of male entrepreneurs and holds the torch up high for young girls and women in the country to follow their own dreams.

These young minds are redefining entrepreneurship through their groundbreaking ideas and shaping the way the youngsters of tomorrow perceive business and success.