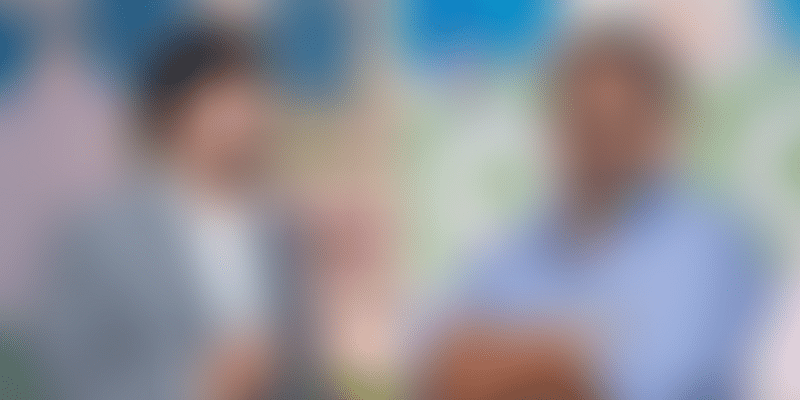 In a span of almost seven years, Osam Dairy, today sells over one lakh litres of milk per day in Jharkhand and Bihar despite the presence of brands like Amul, Aashirvaad, and Sudha.

Kurien came to be known as the Father of the White Revolution -a movement comprising Operation Flood and other dairy initiatives that made it possible for almost every Indian household to consume milk on a daily basis.

Although Kurien passed away in 2012, his ideas still live on in dairy companies that were inspired by the Amul model.

Osam Dairy, from Ranchi, Jharkhand, is one such business. Started in 2012, Osam Dairy was started by four friends who knew each other from their college days.

"We founders invested our personal savings of Rs 2 crore to start the business. We were inspired by Kurien's model of connecting farmers with consumers."

Thus, Osam's objective is to procure milk directly from farmers in Jharkhand and Bihar, chill and process to sell it to retailers.

Although two friends left the business and the company almost went bankrupt twice, Osam Dairy took the proverbial bull by the horns to emerge as the one of the fastest growing private dairy companies in Jharkhand.

Today, Osam Dairy sells one lakh litres of milk on a daily basis and clocked a revenue of Rs 120 crore last year, the company claims.

Amul (Anand Milk Union Limited) and Kurien's strategy hinged on dairy cooperatives that ensured farmers were treated fairly and were paid well for their milk. Further, neither Amul nor any of the intermediaries owned the cows.

Osam is not a dairy cooperative, but largely follows a similar strategy in the way farmers are treated.

Osam sets up milk collection points in villages, and farmers can go there to drop off the milk they have collected from their cows. Payment is made instantly and at rates higher than those offered by traders in the markets.

This way, Osam's milk collection points, like Amul's, do not leave much incentive for farmers to go to markets where they might be subjected to exploitation and manipulation by traders.

If a consumer in a village is buying directly from a farmer, there is usually no way of telling if the farmer has adulterated the milk to increase his margins. If a consumer is buying from a trader or retailer, there is still no guarantee the milk is unadulterated, and further, he/she doesn't know if the farmer has been compensated fairly for the milk. Therefore, farmers selling milk to Osam is beneficial for the consumer.

Millions of Indians still buy directly from farmers or traders, and in 2018, it was reported that around 68.7 percent of milk and milk products sold in the country were not as per standards laid down by the Food Safety and Standards Authority of India (FSSAI).

"We also differ from the Amul model in terms of payments. We have invested in technology where we provide farmers with a card made by a IoT company in Bengaluru," Abhinav explains.

"The farmers swipe the card whenever they bring their milk to the collection point. After swiping, all the information goes to a cloud-based system where the data is recorded. This way, we are able to give direct and digital payments to the farmers in over 100 villages," he adds.

With this model of milk collection, Osam claims it is present in over 500 villages in the region.

From the collection points/centres, Osam transports the milk to chilling plants which have capacities of over 25,000 litres each. After chilling, insulated tankers carry the milk to Osam's processing plant in Patratu, Jharkhand, in a short span of time, in order to maintain freshness.

The Patratu plant is a 50,000 litre, fully-automated processing plant where no physical human touch is required, the company claims.

It also has a similar processing plant in Seraikala, Jharkhand.

At the plant, certified dairy technicians oversee the pasteurisation, processing, and packaging of the milk, to which no preservatives or chemicals are added, the company says.

Harsh Thakkar (42), Director, Sales and Marketing, the co-founder that stayed with the company, says:

"Once the packaging is done, we follow the standard FMCG model where we work with distributors. This, we sell in 14,000 retail outlets in 24 districts in Jharkhand and six districts in Bihar."

At a retail store, Osam Dairy's milk costs Rs 21 for half a litre. Harsh says the milk is competitively priced based on how much milk usually cost in Jharkhand and Bihar.

"Currently, we have 15 percent market share in Jharkhand, while Sudha milk has around 80 percent. Recently, Amul also entered in Jharkhand. We held on and didn't lose our share to Amul. Instead, we took some of the market from Sudha. Now, ITC has entered BIhar with its Aashirvaad milk brand," Harsh explains.

To stay competitive, Osam is targeting all members of the household, primarily mothers, because they are the decision makers in this regard, Harsh adds.

"Osam is also running a campaign targeted at mothers where the milk's purity is emphasised and likened to mother's love. We are building our brand across all marketing and digital channels including websites, social media, and SMS," he says.

Scaling up and the way forward

After building its foundations with milk, Osam Dairy ventured into making value-added dairy products such as dahi (curd), paneer, lassi, peda, and more.

Over the years, Osam also setup/acquired and commissioned dairy plants, for which it approached venture capitalists for funding.

"So far, we have raised funding from Aavishkaar Ventures, Lok Capital, and CDC Group. Aavishkaar was the most receptive," Abhinav says.

After raising its Series C round of funding recently, Osam is set to expand aggressively in Bihar and open a processing plant in the state. The company also plans to start making flavoured milk products and Indian sweets.

However, Abhinav and Harsh remain wary of the consequences of expanding too quickly.

"When we were a new business, we expanded too fast and almost went bankrupt twice. Our financial estimations were wrong, and we raised money at just the right time to save the company," Abhinav explains.

Another challenge remains ensuring the health of cows. Abhinav says a company farm once faced the death of 26 diseased cows out of a herd of 40.

"The cows had been moved to a different location and could not adjust. This is why they got diseased and died. We overcame this by acquiring cows from a location right next to the farm," Abhinav says.

Keeping these challenges in mind, Osam is confident of growing its revenue and expanding its market reach. "Next year, we are targetting Rs 180 crore. By 2024, our aim is to have a revenue of Rs 500 crore just from Bihar, Jharkhand, and West Bengal," Abhinav says.

Starting with Rs 50K, this man moved from his traditional family business to build a D2C furniture brand