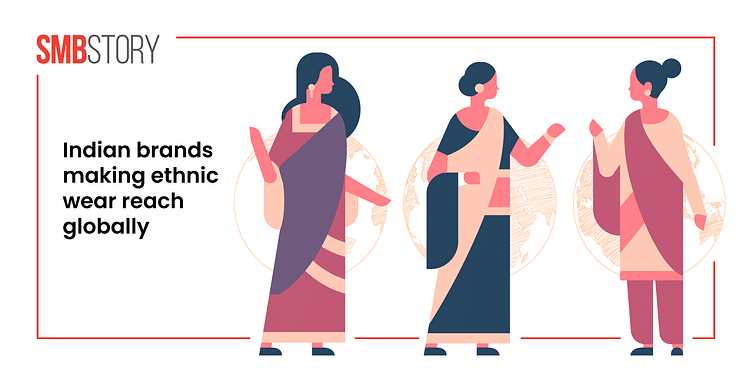 For Indians around the world, Indian ethnic wear brings a sense of belonging. Here are five homegrown brands that are taking the country’s artisanal work across the world.

Irrespective of which part of the world you hail from, Indian ethnic wear is sure to catch your attention. The design, embroidery, and weaving techniques that are a part of a traditional ensemble don’t just grab eyeballs, but also represent Indian traditions and culture.

Each Indian ethnic wear brings its own history, charm, characteristics, and beauty. That’s why many homegrown brands are making efforts to popularise such artisanal work across the world.

Over the past couple of years, the global ethnic wear market is experiencing growth due to the emergence of new trends and the global reach of brands amid digitisation.

According to AAPI Data, Indian-Americans are the highest-earning ethnic group in the US, having a median household income of $139,000, which is over 10X of a middle-class family in India. For nearly 180 million Indians globally, this creates a potential market.

Mumbai-based ﻿Kalki Fashion﻿ was established by Shravan Gupta in 2007 after he saw a gap in the designer ethnic wear market.

In 2010, Kalki Fashion formally established its online presence. Second-generation entrepreneur Nishit Gupta says, “At that time, ecommerce was picking up, and we spoke to players like Myntra. However, as our range was premium, we couldn’t get to terms with ecommerce and decided to stay on with our own website.”

At the same time around, Nishit Gupta, Director of Kalki Fashion, also built the company’s website in a push to start online sales. Even though video shopping wasn’t common at that time, Nishit says the brand opened the experience of customers trying out different outfits through Skype, Facetime, WhatsApp, and now, Zoom; and this strategy even attracted foreign customers.

From pure silk Banarasi to Jaipuri gota, Lucknowi chikankari, and more, Kalki has over 500 artisans on board creating these traditional handcrafted pieces.

The brand has been selling globally since the last decade, but Nishit says the global demand for Indian ethnic wear has grown significantly in the last five years.

Today, Kalki Fashion sells its products globally — even to remote countries such as Norway — and has a dominant customer base in the US.

How to start an online fashion business with Rs 10,000 initial investment

Started as a passion project from a family home, ﻿The Indian Ethnic Co﻿ is a Mumbai-based brand founded by mother-daughter duo Hetal and Lekhinee Desai in 2016. In just five years, the clothing brand has touched nearly Rs 10 crore in turnover, and deals with more than 3,000 monthly orders.

In the last one and a half years, The Indian Ethnic Co has witnessed a jump in its global sales and Lekhinee says they have a strong customer base in the US, the UAE, Singapore, and Japan. In total, the brand sells to around 50 countries globally.

Lekhinee says that the brand focused on just one goal: to make Indian fashion responsible, sustainable, and truly handcrafted.

The company deals in handcrafted fabrics like Ajrakh, Bandhani, Bagh, Batru, Balotra, Dabu, Sanganeri, and more. Besides salwars and kurtis, their products now involve saris, dupattas, western and Indian tunics, silver jewellery, and more. It works with around 500 artisans from across the length and breadth of India.

Started by sister duo, Aparna and Ambika Thyagrajan, ﻿Shobitam﻿ holds a strong emotion behind its inception as Aparna says, “Buying Indian ethnic wear in the US was not a very satisfying experience.”

“Living in Seattle, US, I always felt short-changed by the variety and quality in the ethnic wear. During one of my visits to India in 2018, I was working with a zardosi artist for sarees that Ambika and I were designing for ourselves for an event. The karigar suggested that we start a boutique and that he would work with us,” she adds.

This got Aparna thinking and in 2019, she started building Shobitam to take Indian ethnic wear to a global level.

Aparna started by selling 15 sarees, and in just two years, Shobitam is shipping products to over 30 countries.

From Sozni in Kashmir, Chikankari in Uttar Pradesh, Dabu in Rajasthan, Ikkat in Odisha, Moiran Phee in Manipur, to Pen Kalamkari in Kerala and more — the brand is associated with over 340 weavers and artisans across 16 cities in India.

It has witnessed over 300 percent annual growth in the last two years.

Along with his wife, Vandana Mundhra, Anuj Mundhra founded Jaipurikurti.com as ﻿Nandani Creation﻿ in Jaipur in 2012, with a borrowed capital of Rs 50,000.

With the funds, he bought 10 sewing machines for stitching kurtis and suits. Vandana would design kurtis, which were then dyed, printed, stitched, sampled etc in its manufacturing unit in Kartarpur Industrial Area, Jaipur. The brand got listed on Snapdeal and Jabong, and started selling in-house manufactured items on these platforms.

“In 2012, the concept of online shopping was known to the world but it was new to India. Hence, Indians were hesitant to buy online,” he tells SMBStory.

But nine years later today, the company manufactures and sells suits, kurtis, fusion wear, bottomwear, and a host of other apparel items. The B2C company now also exports to countries such as the UK, the US, Australia, Malaysia, and a few others.

Since 2007, Kirti Poonia had been working with the Tata Group and later got selected for the company’s leadership programme – Tata Administrative Services. As part of the programme, she went to Mithapur, where the Tata Chemicals Society for Rural Development (TCSRD) had launched the ﻿Okhai﻿ Centre for Empowerment in 2008 to support rural women artisans.

She came across artisan women, which, she says, was a moment of epiphany. “These women were amazingly talented. I realised that their products were so exotic that the world had to see them,” she explains.

Kirti took on the responsibility of ﻿Okhai﻿ full-time and joined the brand as its Head. The timing was perfect as the ecommerce wave had recently hit the country, which was fast transitioning into an internet economy.

Kirti launched the Okhai website in 2015. Gradually, the products started getting listed on Tata Cliq, Amazon, Nykaa, and several others platforms.’

A year after the first lockdown was announced, Okhai claims to be supporting 24,000 artisans from all over the country – all of whom sell through Okhai’s platform. Okhai has an office in Mumbai, but the sales office, design studio, and warehouse are located in Ahmedabad. A total of about 50 people are employed by the brand on a full-time basis.

Okhai started as an NGO. Today, it is a standalone business that is not just supporting its own people but also lending support to various organisations operating in similar spaces.

The brand sells all over India and has a strong customer base in the US, Singapore, the UK, Germany, Dubai, and the Netherlands. While the US remains its largest market, Okhai has also launched a physical store in New York City.