From selling spices on bicycle to becoming a Rs 154 Cr revenue company: the story of Badshah Masala 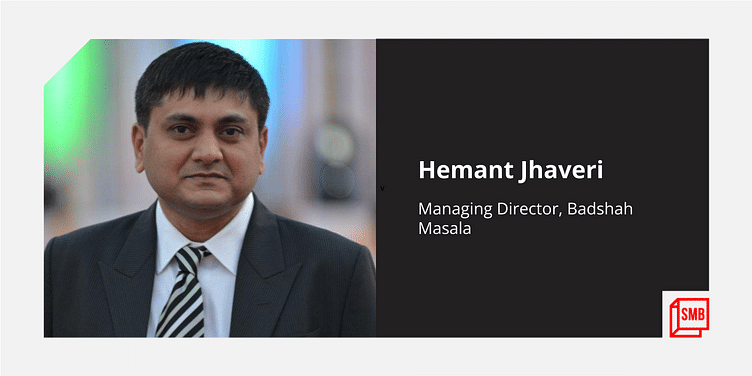 Badshah Masala was started in 1958 when Jawaharlal Jamnadas Jhaveri started selling garam masala and tea masala while riding on his bicycle. Started as a small business, it has today become a large company, and is a regular feature on most of the kitchen shelves. Here’s the story behind this legacy.

Sounds familiar? We have all grown up listening to this jingle ad, and salivating over the dishes featured in the TV commercial. Recently, many Instagram influencers improvised on this jingle ad and took many down the memory lane to the 90s when this ad was aired and broadcasted on radio and television.

The brand has been winning its customers' hearts since its inception in 1958, yet not many know the man behind one of the oldest spices companies in India. SMBStory interacted with Hemant Jhaveri, the second-generation entrepreneur and Managing Director of Badshah Masala, to understand the Made in India brand’s legacy and how it has remained relevant over the years to become a Rs 154 crore turnover company in FY 20-21.

The story of ﻿Badshah Masala﻿ dates back to 1958 when Jawaharlal Jamnadas Jhaveri started the business with just garam masala and tea masala in Mumbai.

“My father would collect tin cans used to sell cigarettes. He then cleaned them, peeled off the labels, and would package the masalas in them. Riding on his bicycle, he would sell them in nearby areas,” Hemant tells SMBStory.

Jawaharlal Jamnadas then set up a small unit in Ghatkopar, a suburb in Mumbai, which didn’t take long to get upgraded to a large 6,000 sq ft factory in Umbergaon in Gujarat. Then, the company extended its offerings to introduce pav bhaji masala, chat masala, and chana masala.

Jawaharlal Jamnadas successfully ran the business till 1996, but after his sudden demise, his son, Hemant, took over the reins.

“I had joined the business in 1994 right after college and had acquired business skills from my father. I was 23 years old when he passed away, but I was determined to take his legacy forward,” Hemant says.

After Hemant joined the business, his foremost step was to increase the company’s reach. He expanded the reach across the entire country, and today, Badshah Masala is exported to over 20 countries. The brand also occupies prominent shelf space in the supermarkets, local grocery stores, as well as international markets, with a distributor network of 450 distributors.

However, they saw a drastic fall in sales during the pandemic.

“During the lockdown, many people indulged in cooking at home. While restaurants shuttered down, cloud kitchens boomed. This was a time when Badshah realised that it was time to unlearn their traditional method of doing business and start with online sales,” Hemant asserts.

According to IBEF, India is the world's largest producer, consumer and exporter of spices; the country produces about 75 of the 109 varieties listed by the International Organisation for Standardisation (ISO) and accounts for half of the global trading in spices.

Hemant says that while he didn’t face any challenge in growing and scaling up the business, however, the pandemic period was tough. In the future, he plans to diversify and expand his spice kingdom, and get Badshah Masala into RTE (Ready To Eat) and pickles segments.

“Also, we plan to modernise processes at Badshah Masala and introduce automation to reduce large portions of manual work for a safer and more consistent product. The quest to popularise Indian cuisine around the world will continue at full speed,” he adds.

With almost an equivalent shift in demand from newer avenues such as home chefs and cloud kitchens, Hemant aims in balancing offline and online target audiences.

Third gen of Banswara Syntex, this pair of brothers is cashing in on D2C wave with The Pant Project

What digital tools must MSMEs embrace to survive and scale

After growing in the export market despite the pandemic, Nandan Terry is now eyeing an IPO