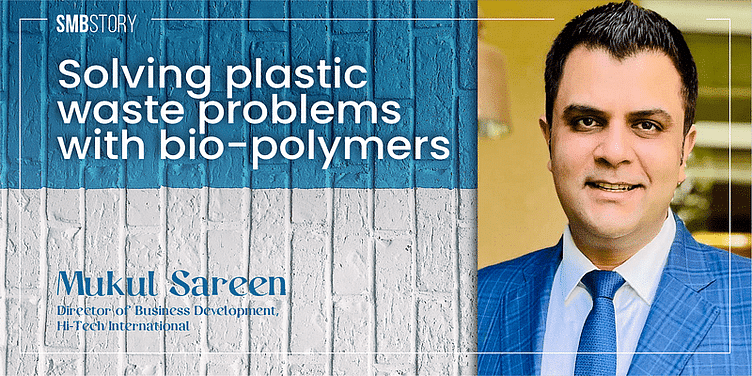 According to a study by Un-plastic, India generates about 9.46 million tonnes of plastic waste every year. The need of the hour is sustainable alternatives for plastic, and Gurugram-based Hi-Tech International is providing one with its plant-based bio-polymers.

India generates about 9.46 million tonnes of plastic waste every year, of which 40 percent remains uncollected, according to a study by Un-Plastic, a collective co-founded by the Confederation of Indian Industry (CII), United Nations Environment Programme (UNEP), and WWF-India.

And all that uncollected plastic ends up in waterbodies and stray garbage dumps, polluting not just the environment but also harming aquatic and terrestrial life.

It is now more imperative than ever to work around sustainable alternatives for plastic, and Gurugram-based Hi-Tech International has recently innovated a product that could provide just the right solution. The company recently launched a plant-based bio-polymer, manufactured at its unit in Ludhiana. Bio-polymers are natural polymers produced by the cells of living organisms. Plastics made with bio-polymers, unlike their synthetic counterparts, are known to disintegrate sooner.

Hi-Tech International was started in 1982 by Jasbeer Sareen. Today, it is run by his sons - Sidharth and Mukul Sareen. The company started with the production of traditional plastics and then gradually moved to the production of polymers, anti-corrosion products and more.

Nearly 40 years later, Hi-Tech International has more than 600 corrosion prevention products in its portfolio, serving 10,000 customers worldwide. At present, besides India, Hi-Tech’s manufacturing plants are in Italy, France, Dubai, and the US. Its Ludhiana unit, where it manufactures the bio-polymers, has a combined capacity of producing 6000 tonnes of the product every year, according to the company.

The bio-polymer produced by the company, called Dr Bio, is said to replace single and multi-use plastic that are used to make several products.

Speaking to SMBStory, Mukul Sareen, Director of Business Development, says that the idea to come up with such a product came in the year 2016 when “the whole world was talking about the environment.” He says, “The world is very serious about environment and sustainability. Towards this, we wanted to create polymers that would create different products.” Already manufacturing VCI films, papers, foils and much more, the company had the requisite expertise to explore something in this field as well.

According to Mukul, the research and development (R&D) towards this started immediately after, and the company rolled its first bio-polymer as a pilot in 2019. Now, Dr Bio has been approved and certified by the Institute of Petrochemicals Technology.

Dr. Bio products are 100 percent compostable, claims the company. The basic raw material to produce this bio-polymer product is corn, which is further used to make products like bottles, containers, lamination films, shopping, carry bags, etc. The only factor that differentiates bio-polymers and traditional plastics is sustainability and biodegradability.

According to Mukul, plastic made from this polymer will supposedly disintegrate after 12-14 weeks, and will completely biodegrade after six months.

In the global market, Europe dominates the space followed by China. India is home to several companies in the sector such as Bioplastics International, Ecolife, Plastobag, Truegreen and more. These companies are involved in the manufacturing as well as selling of bioplastic products such as gloves, plastic bags, cutlery items, and more.

Talking about Europe and the widespread adoption of bio-polymers in the global market, Mukul says, “While we (India) are in the learning phase, in Europe, they already have set standards, procedures and applications for bio-polymers. They have adopted it in their daily life while here, we are still educating the Indian market.”

He further adds that Indian companies, especially ecommerce ones, where the use of plastics in packaging is widespread, must take the initiative of adopting bio-polymers. “Rome was not built in one day, but we have to make a start. Big brands can start by adopting 5 or 10 percent bio-polymers, and then gradually expand.”

Mukul feels there is a natural inclination among people to adopt sustainable alternatives, and if everyone does their bit, “we can move in the right direction”. He says the COVID-19 pandemic has given a good opportunity to India to expand its global reach.

“They (the global suppliers) still rely on China but want to shift to other countries as well like India, Vietnam and Taiwan.”

In the near future, Hi-Tech will reach out to more brands across different sectors in order to educate them about bio-polymers, and wants to penetrate deeper into the existing markets. It is specifically looking at targeting companies in the frozen foods and ecommerce segments by reaching out to the people responsible for the packaging verticals of these companies.

Going forward, the company also wants to build a solid and resilient supply chain by directly connecting with corn farmers or starch manufacturers.