Chandigarh-based Bharatsthali, a one-stop shop for silk sarees, is reviving the glory of handloom wear 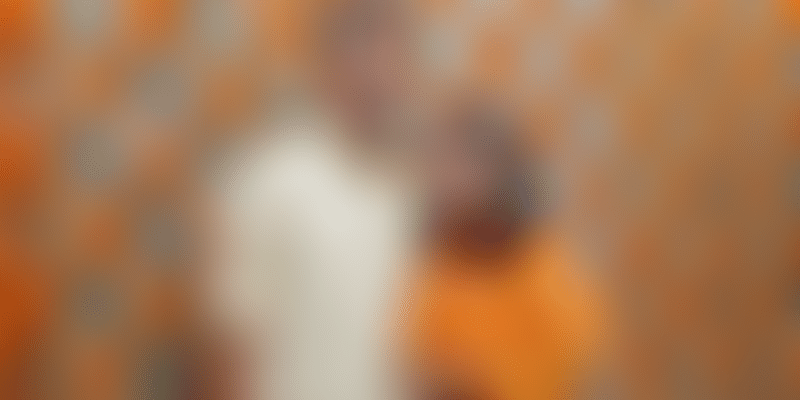 Within one year of its inception, the brand has recorded a turnover of more than Rs 20 lakh receiving approx 400-450 saree orders every month.

Leaving their well-established family business, Sumati and Pulkit Gogna started Bharatsthali.com in late 2017 with a capital of Rs 40 lakhs to revive pure silk and kanjivaram sarees, which in this age of slide-on-move-on clothing seems to be forgotten.

Realising the huge potential of Indian handloom industry, which in recent years has gained much momentum among the urbans, this husband-wife duo started this venture to let people live with traditions.

The Chandigarh-based business is a fair trade marketplace for sarees which sources sarees directly from the artists and artisanal communities. From Kanchipuram suburbs for Kanjivaram sarees to Pollachi in Coimbatore for Pollachi sarees, the couple also travels to Bhagalpur and Madhubani villages in Bihar and Banaras for Banarasi sarees. Pulkit says,

Depending on the motifs, the intricacy of zari work and silk threads, a handloom saree can take from 10 to 50 days to prepare. So, we have partnered with over 50 looms to fulfill the demand of at least 150 premium silk sarees in a month with us.”

According to Pulkit, “Saree is considered as an attire just for special occasions like a wedding or a religious ceremony. But, thanks to the designers, Bollywood A-listers, and other celebs for bringing exquisite handloom work back to the mainstream.”

He feels the dropout of handloom sarees on a mass scale has created a knowledge vacuum. “People can’t differentiate a Kalamkari from Madhubani and the authenticity of the saree also remains a mystery. The GI tag is too much of a trouble to understand for people outside the biz,” says Pulkit. And this is where Bharatsthali comes in to educate, offer buying assistance, and unfurl a whole wide world of sarees to the customers.

The beginning of Bharatsthali

Pulkit and Sumati travelled across the villages of South India to understand the intricacy of weaving, warp and weft, the block printing and other important factors on a first-hand basis. Thus, they created Bharatsthali, bridging the gap between the artists and customers.

Pulkit says, “In this era of ecommerce and tough competition, the authentic handloom fabric has lost its glory. And, the pain point is you can’t tell between a fake and an authentic one unless you have the eye to notice the intricate details that matter.”

Bharatsthali silk sarees come with Silk Mark India label which is the benchmark of natural and authentic silk and an important quality assurance checkpoint that comes handy when you plan to keep a heritage Banarasi or Kanjivaram saree for posterity.

Being a techie, Pulkit himself developed his website and unfurled a whole new world of sarees to its customers. At present, Bharatsthali range is available on Bharatsthali.com and various social media platforms.

Not just in India, they also deliver their products to various countries like Canada, the UK, and Malaysia and receive, on an average, 400-450 orders every month. The brand has also started supplying silk and pure linen fabric.

“Influencing and educating customers to adopt a saree is all we want. It is not about side-lining the lifestyle for the sake of a saree. It is about including sarees in the day-to-day lifestyle just like salwar-suits,” says Pulkit.

Changing perceptions of people and creating a sustained relationship between handlooms and the new-age generation isn’t an easy task. The challenge has been since its inception. Pulkit says, “It has been bumpy but since the beginning, we knew that we want it to happen gradually.”

The couple visits South India once a month to check on new designs and pick up stock from handlooms, which Pulkit says is time-consuming and the biggest challenge.

The couple refrains from listing products in ecommerce portals due to disparity in prices at the expense of quality of products.

Within just one year of its inception, the brand has recorded a turnover of more than Rs 20 lakh and in the current year, the couple hopes to increase it up to Rs 40 lakh.

Bharatsthali is still at its budding stage but soon will open its first retail store in Chandigarh, says Pulkit, increasing the count in coming years.