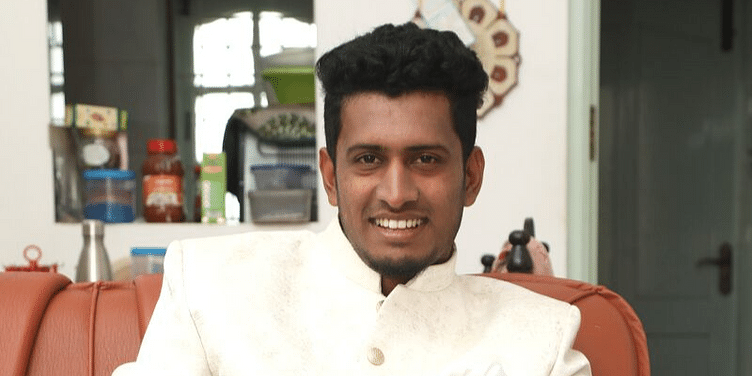 Here’s how Tirupur-based engineer Zubair Rahman went from being a CCTV operator to launching his own ecommerce business to sell apparel online.

In 2014, Zubair Rahman worked as a CCTV operator in Tirupur, Tamil Nadu. The 21-year-old electrical and electronics engineer, fresh out of college, went to offices and installed CCTVs on their premises.

But his heart was elsewhere. Zubair was set on starting his own business. However, he wasn’t clear which sector to venture into.

One day, as he turned thoughts over in his head, he got a request to install CCTVs in the office of an ecommerce company.

“I went to install the CCTVs and got curious about the operations of the company. I spoke to the manager there, and he told me how the company was making money by sourcing and selling items online.”

The idea appealed to Zubair. He didn’t have to invest heavily in manufacturing if he started an ecommerce marketplace.

Zubair realised textiles were the best products he could source from Tirupur. The city is known as the knitwear capital of India for a good reason: it has a robust textile manufacturing ecosystem, which accounts for 90 percent of India’s cotton knitwear exports.

“I spent two months doing my groundwork and met various textile manufacturers in Tirupur. I also spoke to my friends to help source and explore what kind of clothes would sell well online,” he says.

By now, he had quit his job and was determined to become an entrepreneur

It was a bold move, especially for an engineer during India’s unemployment crisis. Since 2010, there have been no improvements in the employability of Indian engineering graduates, according to a 2019 employability report by talent evaluation company Aspiring Minds.

The situation is so alarming that presently, 80 percent of engineers are not employable for any job in the knowledge economy, the report says.

Thus, Zubair’s decision to quit his job was potentially a point of no return. Further, he didn’t have deep pockets.

“Most of my money went in getting my business registered and getting a GST number. So I had to start small: I started sourcing clothes in small numbers and tried selling them online,” he says.

In those initial days, Zubair started listing the clothes on Flipkart, and then on Amazon. He was getting just one or two orders a day, but the pace was picking up.

Zubair found maximum traction in selling kids apparel in combo packs of five or six units. But this meant he sold each pack at rates between Rs 550 and Rs 880, and the margins he made on each sale were relatively small.

“Selling in combo packs made individual clothing items cheaper than selling them separately. I was seeing less profit per sale, but my low per unit prices attracted a lot of attention and my number of orders quickly shot up,” he explains.

The growing number of orders made him decide he that would focus on larger volumes to bring in more profits.

Zubair also went back to his partner manufacturers and asked for more products to add to his inventory.

As the number of orders swelled, he moved out of the home setup and invested Rs 30,000 in a manufacturing unit. The facility uses local fabric to make not only kids apparel but also boys’ T shirts, pajamas, track pants, sweatshirts, and more.

Zubair’s strategy worked so well that The Fashion Factory now receives 200 to 300 orders per day.

By fulfilling these orders, Zubair’s company rakes in around Rs 50 lakh revenue each month, he claims.

“We also signed an exclusive deal to sell to Amazon. We see total sales of 20 lakh to 30 lakh units each month,” he says.

The Fashion Factory sees yearly revenue of Rs 6.5 crore, and is targeting Rs 12 crore in the next one year, Zubair says.

Despite the runaway success, the entrepreneur is regularly looking over his shoulder. “Online selling is trending right now. A lot of people are following a similar model because textile makers don’t know how to sell online.”

However, Zubair believes he has an edge over his competition. According to him, it is easy to start a similar business, but difficult to run it without his kind of experience.

“Apart from my experience running The Fashion Factory, my father comes from a garments manufacturing background. He ran a textiles business until he faced a lot of financial challenges, fell sick, and shut it,” he says.

“I am not always able to scale up my manufacturing to meet the orders. I got support from Andhra Bank once by means of an overdraft facility, but I am still on the lookout for more funds,” he says.

With more funding, the engineer plans to introduce more designs and move into a bigger manufacturing unit. He is also planning to sell to retailers in Dubai and take his brand global.

How this women’s bottom wear brand became a listed, profitable company within 12 years