Inc.5 has 54 exclusive stores across India as well as 300 point-of-sale. The brand aims to provide women with stylish and comfortable footwear.

"Give a girl the right shoes, and she will conquer the world," Marilyn Monroe once famously said.

The right pair of shoes, especially heels, help bolster a woman’s confidence, but finding the sweet spot between style and comfort is often a tall order.

Many women give up one for the other: a pair of sexy heels that pinch your toes, or a comfortable pair of flats that has nothing by way of style going for it.

Almas Nanda found this to be troubling, and wanted to have both: plenty of style with oodles of comfort. In 1998, when she was but 24 years old, she started Inc.5 to provide women with stylish footwear that did not compromise on comfort.

In an interview with SMB Story, her brother, Amin Virji, who is the Managing Director of Inc.5, shares how they started from one store in Heera Panna Shopping Center in Mumbai and took the brand’s presence to 54 exclusive stores across India.

"Our grandfather launched ‘Regal Shoes’ in 1954. It was a family-run business but we were limited to manufacturing basic and formal footwear. In 1998, we thought of exploring the opportunity in the untapped footwear market that provides good-looking footwear with comfort. Hence Inc.5 was launched.”

Inc.5 was started in a 100 sqft. store with the purpose of giving young girls a variety of comfortable options for their footwear. Amin says, “Almas wanted to break the myth that fashionable footwear cannot have the comfort element. She used to travel a lot and after seeing the trends in other places she wanted to incorporate them into her footwear brand.”

But there is more to comfort than just adding some cushioning. Amin explains: “It’s about components that go inside the shoes and each variety of footwear differs in components. Adding layers of foam doesn’t make footwear comfortable unless the right components are added.”

In the initial days, Almas herself handled the designing of the footwear. She wore the shoes to get a sense of the problems and took appropriate measures to resolve the issues. Twenty years in, she now manages the ladies footwear merchandising.

“Back then, in 1998, the internet was not popular, and word of mouth did the brands’ publicity. We received great responses from our customers, and we opened two more stores in Mumbai in a span of two years, and since then, there is no looking back,” Amin adds.

As the Managing Director, Amin expanded Almas' vision of a concept footwear store to being one of the home-grown market leaders in the footwear category. The family credits the present success to the hard work and team spirit of all the family members and employees.

Regal Shoes and Inc.5 were merged in 2001 to form Inc.5 Shoes Private Limited.

Inc.5, which now has a strong presence in Tier I and Tier II cities, including Delhi, Kolkata, Chennai, Bengaluru, Hyderabad, Ahmedabad, Kanpur, Lucknow, and Pune, records an annual turnover of Rs 163 crore.

Finding their feet in the market

Inc.5 shoes are found in 300 stores across India. On the distribution channel, Amin says that the company doesn’t have any distributors because they want to keep the control within the company.

Inc.5 footwear collection is also listed on ecommerce portals like Amazon, Flipkart, Myntra, and Jabong, but 95 percent of their sales happen at offline stores.

The company looks to foreign markets for design inspiration, and components to make footwear for Indians. Inc.5 stores also carry footwear from other brands like Skechers, Steve Madden, Clarks, Crocs, and others.

The company currently exports its footwear to Sri Lanka.

Inc.5 give contract orders to factories located in Delhi, Agra, Kanpur, Chennai, and other places, to meet their requirements. As of now, they do not own any manufacturing unit.

Good footwear needs good material, and finding components in India was not an easy task. Amin recalls that back when they started out, not all materials were available in India, due to which incorporating trendy styles was a challenge. Later, they imported components like soles, buckles, and heels from Italy.

At present, they import a few materials from China, Vietnam, and Taiwan.

With the market opening up further with ecommerce, competition too is heavy.

Today ecommerce has made it really easy for consumers to buy online. So it has become a global market and to be competent on the design, stock, and the price front is challenging,” Amin explains.

Selling footwear online is a challenge even though the sales are phenomenal. The return ratio is also quite high. Amin says, “Footwear is something the customer wants to try and buy. For garments, people may have a second thought about returning but it is not in the case for our industry.”

Besides their main offering of footwear for women, Inc.5 also has two other brand verticals - Atesber and Privo, which largely cater to men’s footwear.

On the company’s future plans, Amin says that they are planning to double their number of stores in the coming years and increase their sales percentage in Sri Lanka. They have plans for exclusive stores for Inc.5 handbags. He adds that export expansion will also be a focus now.

The modern art of shoe making 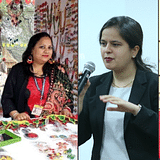