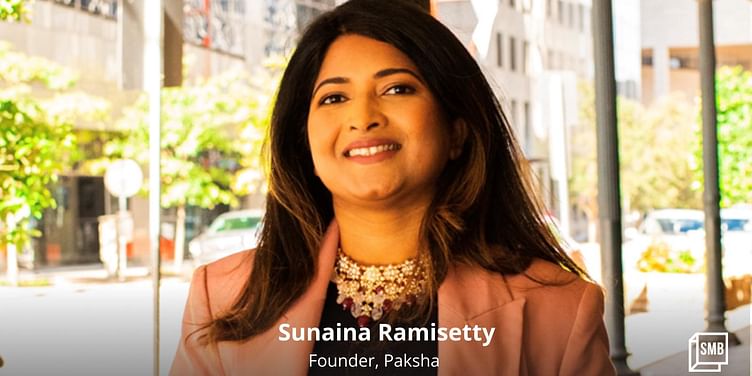 Paksha, a new brand by globally renowned jewellery company Tarinika, offers a collection of silver jewellery inspired by India and its heritage.

Launched in 2021, Kolkata-based jewellery brand ﻿Paksha﻿ has a unique set-up. With a team of master craftsmen, artisans, and high-tech facilities all available in-house, it has a singular advantage of overseeing all aspects of the product journey by itself.

“I grew up in the jewellery industry,” says Sunaina Ramisetty, owner of Tarinika and the force behind its new venture, Paksha.

In the 1970s, her grandfather went to Hyderabad, known as India’s ‘City of Pearls’, and as a pearl merchant as well as an artisan began a business that has sustained itself for decades.

The business has become a family legacy, eventually becoming the brand that is known today as Tarinika. With Tarinika, the founding company has also been in the business of shipping jewellery globally and has been able to extend that expertise into Paksha.

Sunaina’s family moved from Hyderabad to Kolkata in the mid-90s. Their products were available at clothing stores like Pantaloons, Shoppers’ Stop, Globus, and for the next two decades the company was mostly focused on selling pearls and pearl-related jewellery under the brand name ‘Imperial Pearls’.

“At that time, we had around 75 stores all over India, but nothing online,” says Sunaina. After moving to the US for her Master’s degree in 2007, she noticed a lot of demand for Indian jewellery. Community events, Indian parties and fairs seemed to her an exciting opportunity to grow the business and earn an independent income.

“There were a lot of people in the US already selling such products,” she notes, “but there was no range, no quality, and the prices were very high.” She discussed with her family the possibility of selling their products, and was initially met with resistance.

However, after selling out two boxes of jewellery in a single day at a show in Florida, Sunaina began to take up all such opportunities that came her way. After six months of having successful sales at shops held all over Miami, she had a discussion with the family again, this time noting the space and using the observations made from the string of profitable sales to convince them to step into the US market.

That was how Tarinika started in 2014. Initially strictly in the B2B space, the company displayed its wares at jewellery shows around the US. The company grew quickly, and within a few years, was doing two to four shows on a single weekend.

“We started the website in 2017 as a brand profile, just because we were getting so active offline that we thought it would be good to have a presence online. It wasn’t intended to be an online store,” she says.

The company was sceptical about how well jewellery would sell online, but seeing customers expressing interest in an online store, Tarinika started its online operations in 2018. Ever since then, it’s been growing at a rate of 200%, year on year.

How Paksha came into the picture

“Tarinika laid the path, its success told us that there is interest for Indian jewellery abroad,” says Sunaina. The products are popular among Indians as well as non-Indians; even now, 30% of Tarinika’s customers are non-Indians.

Over the years, the company started receiving a lot of requests from customers asking for customised jewellery options. This, coupled with an ambition to become a one-stop shop for all things jewellery, made the idea of starting Paksha more concrete.

Sunaina says that the company did not want to be limited to being a store for wedding jewellery. “We wanted to expand and make jewellery for all generations, all needs… jewellery for everyday use, to be worn to the office, and most importantly make products for the ones who don’t usually wear fashion jewellery, but still want to augment their style with something precious.”

Entering this space wasn’t easy, as silver jewellery was a market that would present Tarinika with considerable competition from existing, well-established brands. To set itself apart, the company went through an intensive phase of research and development on its competitors. even before starting the groundwork on Paksha.

This woman entrepreneur quit her CA dream to start a jewellery brand, saw sales of Rs 2 Cr in FY21

The company used the information gained from the R&D to build the brand’s principles, ensuring high-quality craftsmanship and sustainable production, while at the same time paying heed to building a strong workforce and an even stronger community, championing women by having a team 70% female employees.

Another thing the company mentions as something of high import is the customer experience. Their teams stationed in both the US as well as India offer customer service around the clock, in order to ensure a smooth shopping experience, and this is reflected in their customer retention rates, which are at 40% over the third quarter of 2022.

Soon after the lockdown, Tarinika saw a 500% jump in sales.

“It was surprising to see how people spend money on jewellery online in India. If the quality is good, and the design is trending in the market, they don’t mind paying its worth,” says Sunaina, adding how the customer base has grown from being predominantly in Tier-1 cities to now including customers from Tier-2 and Tier-3 as well, over the past three years.

The company currently has four stores in India, with two in Visakhapatnam and one each in Vijayawada and Bengaluru.

As for prices, Tarinika offers products with prices ranging from Rs 250 to Rs 18,000, while Paksha has products starting at Rs 1,800 and going all the way to Rs 1 lakh

The real goldmine for both Tarinika and Paksha seems to be in its customer retention rate, a recent example being a 60% retention rate this 2022 Diwali season. Paksha also has a projected retention rate of 45% by the end of the fourth quarter of 2022.

Regarding future plans, the family-owned business says it is focused on scaling. Tarinika opened in Australia last year, and the company aims to launch Paksha in the Australian market in 2023, followed by Europe later on. It also plans to launch eight stores in India for Paksha.