In 20 years, this Jammu-based dental materials manufacturer grew to become a profitable business exporting to 80 countries 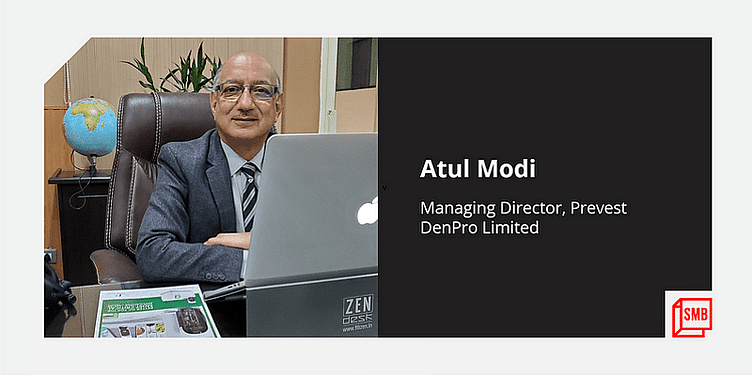 In an interaction with SMBStory, Atul Modi, Managing Director of Prevest DenPro narrates the company’s 20-year-long journey, including how it became the first organisation from Jammu & Kashmir to get listed on the BSE SME platform.

Atul Modi was running a chemicals manufacturing business in Jammu in the late 1980s and early 1990s. It had just one customer — Hindustan Unilever. So when HUL decided to shut its operations down in Jammu, Atul was left with no choice but to look for other business opportunities.

This time, he was carrying some profound learnings. “I realised that depending on a single customer was very risky because it could put the entire business into trouble if something happens,” he says, adding, “We started looking for opportunities in an industry which has a wider scope of business and could even be expanded globally.”

This led to Atul and his wife Namrata discovering a key raw material, gypsum, in the valley. Gypsum is used as dental plasters in the dental industry.

This discovery in 1999 led the couple to start a dental materials manufacturing business called ﻿Prevest DenPro﻿, investing Rs 5 lakh each. Twenty years later, the company made its debut on the BSE SME platform in September last year.

In an interaction with SMBStory, Atul shares Prevest’s journey of 20 years including how it became the first company from Jammu & Kashmir to get listed on the BSE SME platform.

Planting a sapling in the valley

When Atul and Namrata first discovered gypsum, they realised that its market was spread across the entire company and they could also export their products to the global markets.

There were other advantages as well. Finding this raw material locally helped in saving the freight cost one side, he noted.

“Jammu was a very backward area. It was a remote area located in one corner of the country and was far away from the major cities and ports,’ Atul says.

Another challenge that the company had to combat was perception. “Nobody was ready to believe that we were the manufacturers. Everybody was of the view that we were importing the products from China or the US and putting our label on them,” he adds.

They set up a unit in Jammu and partnered with the Indian Institute of Integrative Medicine (formerly known as Regional Research Laboratory) to develop its first product-a Plaster of Paris (POP) for the dental industry.

However, a lot of hard work and perseverance went into establishing the pan-India network that Prevest DenPro has today. From one product, the Jammu-based company today offers 100s of SKUs (stock keeping units) in categories such as Endodontics, Composites, Cement and Liners, Auxiliaries, Impression Materials and more.

In 2003, Namrata and Atul participated in a dental exhibition held in Dubai, and this opened doors for finding overseas customers in the Middle East, Europe, the US, and more. It has key certifications including the likes of ISO 13485:2016, EU CE mark, and USFDA (United States Food and Drug Administration).

On making a stellar public debut

Atul says that he and his team had been planning to expand their reach for quite some time now. However, the dilemma that beset them was whether to use their own cash reserves or borrow money from the bank. “We have been having consistent growth so we decided to explore public listing.”

The company made a debut on the BSE SME platform in September last year. It opened at Rs 180.55, a 115 percent premium over the issue price of Rs 84. The IPO of the company drew bids worth Rs 730 crore and subscribed over 38 times.

BSE (Bombay Stock Exchange)﻿ – has created a separate listing trading platform for small & medium enterprises (SMEs) and startups to encourage firms in this segment to access equity funds. In a separate interview with YourStory, the platform's Head, Ajay Thakur had shared that it aims "to nurture these SMEs and startups" as stock market is the best place for them "to access funds to grow their business and is the destination where maximum wealth creation is possible."

Prevest DenPro plans to migrate to the main BSE platform in the next two years as it eyes becoming a Rs 500-crore company.

[Year in Review 2021] 5 trends that dominated the MSME sector

Today, Jammu & Kashmir is a growing industrial hub. It also houses brands such as Sarveshwar Foods, Devans Modern Breweries and more which have carved a niche in their respective segments.

India’s dental market has evolved and has many players including the likes of Septodont India, Sonika Life Sciences and more. Additionally, Atul emphasises that India’s main competition is from Europe and not China.

“China dominates in equipment and the instruments segment. However, it is Europe which has an edge when it comes to dental materials.”

Going forward, Prevest DenPro’s plan is to up its international game by setting up a manufacturing line in one of its top global markets (the US or Europe). It will also roll out a new range of disinfectants and medical devices in the next 12-18 months.

For a long time, Prevest has been a manufacturing company but gradually, it wants to be known as a dental-tech company. The company is in line to achieve this vision as it prepares to launch its new R&D facility in Jammu.