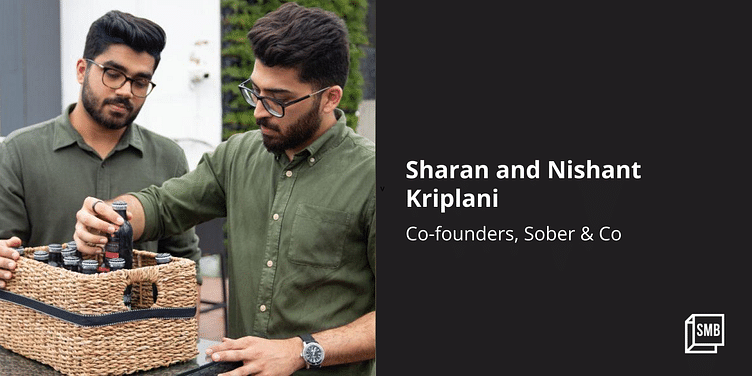 The Kolkata-based company serves handcrafted beverages that can be consumed directly and also used as mixers, thus targeting both mocktail consumers and cocktail lovers.

Sharan and Nishant Kriplani’s search for the ‘perfect’ drink during the lockdown led them to create ﻿Sober and Co﻿, a brand of ready-to-drink beverages and mixers.

The name may seem ironic for a beverage that can also be used as a mixer, but more on that later.

During the lockdown, the Kriplani brothers from Kolkata tried a variety of beverages and cocktails available in the market. But none of them matched what they were looking for—an “exciting drink with unique flavours”.

This drove them to make drinks at home themselves. Soon the brothers realised that this was a messy and time-consuming affair. But they did not give up, and their experiments to hit upon the perfect brew continued. In fact, the research and development of the product took nearly a year.

Sharan is an alumnus of the University of Leeds, where he studied economics and finance. His brother, Nishant, had done a bachelor’s degree in commerce at the University of Melbourne. According to them, their experiences abroad helped them realise what the Indian market was missing.

Sharan says, “Almost every beverage we looked at in India had the same generic flavour, and it wasn’t exciting. We realised that there was a gap in the market—there was no carbonated ready-to-drink beverage or cocktail mixer that was completely unique and exciting and would appeal to the needs of both a mocktail person and a cocktail person at a party. We saw an opportunity here to introduce a host of new flavours.”

Initially, Sharan and Nishant came up with the idea of creating cocktail mixers. (Mixers are non-alcoholic beverages used to complete a cocktail or a long drink.)

By early 2022, they had curated six cocktail mixers with non-synthetic flavours, aided by the expert opinion of Mr Devi Singh, the India winner of the World Class 2019 bartender competition.

It was in consultation with Devi Singh that they understood that mixers would limit them to a very small audience—of cocktail lovers. This realisation led them to tweak their product’s scope, leading to the genesis of a ready-to-drink beverage that could also be used as a cocktail mixer. With this, they opened up their potential market, adding mocktail consumers too into the mix.

When the lockdown ended, in February 2022, the brothers launched Sober & Co, a beverage company that promises “premium”, “handcrafted” ready-to-drink beverages/mixers.

The flavours on offer are Australian Sour, Caribbean Punch, Spanish Margarita, Mexican Mama, Cuban Spritzer, and Goan Mule—"flavours that would cater to all kinds of tastes and still stand out from the usual fruit-flavoured mixers commonly found in the market,” says Sharan.

The drinks come in a range of tastes—tangy, pungent, sweet, sour and spicy—priced at Rs 594 for a pack of six 100-ml bottles.

According to Sharan, Sober’s drinks are fresher and healthier alternatives compared to the drinks in the market. “We keep our drinks low-calorie and free of synthetic flavours and preservatives. The drinks are handcrafted using natural syrups that have no sugar content apart from their natural sweetness. The soda content is 60% less than the carbonated drinks available in the market.”

The company says it uses locally sourced ingredients in its drinks. For example, the kokum used in the Goan Mule flavour is sourced from Goa.

What led the brothers to name their brand ‘Sober’?

Nishant says, “All the cocktail mixers in the market focus on people who drink alcohol. However, we didn’t want to exclude the non-drinkers. We wanted everyone to be a part of the party; so, we named it Sober & Co. This would give an indication to people that it doesn’t have alcohol and can be consumed directly.”

The making of Sober

“It’s not as large a production facility as some of the already established beverage companies,” admits Sharan, “but for us, producing on this scale allows us to match the demand. Since the drinks are handmade by a small team of three employees at the factory, we can also focus more on the quality of the end product.”

The shelf life of the drink is 18 months from the date of manufacture.

India is one of the fastest-growing alcoholic beverage markets globally, with an estimated market size of $52.5 billion in 2020. It is expected to grow at a CAGR of 6.8% between 2020 and 2023, according to the Indian Council for Research on International Economic Relations.

According to Sharan, this is the perfect time for a brand like Sober & Co to make its presence felt. “The market is growing, and people are looking for alternatives to standard options like Pepsi and Coke. What sets Sober apart is our focus on the drink itself—focussing on the handcrafted aspect and making sure that the end product is as fresh and flavourful as possible.”

Sober & Co’s average monthly revenue for the current quarter is Rs 5.5 lakh to Rs 6 lakh, say the founders. The company expects to generate Rs 7 lakh to Rs 8 lakh a month in the ensuing quarter.

After production improves and the brand expands to other markets, the company aims to make about Rs 15 lakh per month by April/June 2023.

Sober & Co is currently sold in Kolkata, Mumbai, Kerala, Bangalore, Hyderabad, Gurgaon and Siliguri. The beverages are available in various retail outlets, including Nature's Basket, Spencers, Fresh Aisle, and The Gourmet Outlet. They are also available online on Amazon.

The company has a strong presence in hotels, restaurants, and cafés too. It has collaborated with Westin Mindspace in Hyderabad to launch its flavours in the city. Notable restaurants in Kolkata, such as Royal China, Fairfield by Marriott, and Cocoa Bakery, have Sober beverages as part of their regular menu. Bakery Nation in Mumbai is planning to serve Sober’s beverages across its outlets.

The company aims to scale up production in the coming months. It is also opening a new plant in Kolkata, where manufacturing is expected to begin in January.