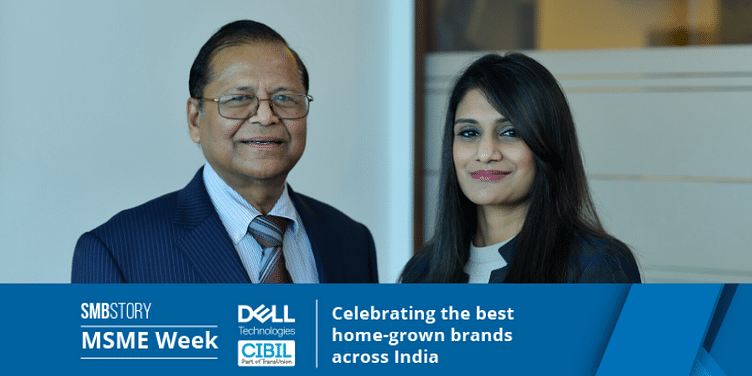 Vinati Organics Limited (VOL), started in 1989, is a speciality chemicals manufacturing company based in Mumbai. It is the world’s largest manufacturer of the niche chemicals Isobutyl Benzene (IBB) and 2-Acrylamido 2 Methylpropane Sulfonic Acid (ATBS), and exports them worldwide, including to China.

For six years, Vinod Saraf worked in the chemicals manufacturing division at the Aditya Birla Group. During this time, he was bitten by the entrepreneurial bug.

Isobutyl Benzene (IBB), the primary raw material for Ibuprofen (a drug widely used across the US, Europe, and Asia) was being imported from China and other countries. Vinod realised it was not being manufactured in India, and this presented him an opportunity to start his own IBB manufacturing business.

The Make in India opportunity was good enough and he decided to quit his job. After exiting Aditya Birla Group, Vinod started Vinati Organics Limited (VOL) in Mumbai in 1989.

“My father raised Rs 15 crore from a bank loan and public equity. The Maharashtra government also had a stake in the company, which he bought out over the years,” says Vinati Saraf Mutreja, the current CEO and Managing Director of VOL and Vinod’s daughter.

Through the 90s, VOL made IBB at its manufacturing facility at Mahad in Raigad district of Maharashtra. But it found it difficult to export IBB to the US.

American enterprise customers were reluctant to import IBB from a new Indian supplier. Vinod visited the customers regularly and tried to convince them to buy his IBB. He began supplying the chemical in small amounts, and gradually increased its export. VOL also started supplying IBB to China.

“Towards the end of the 90s, we put in incremental investments to boost production capacity and became the largest manufacturer of IBB in the world,” Vinati says.

Diversification and its challenges

VOL then felt the need to diversify into other chemical products. The business identified the chemical 2-Acrylamido 2 Methylpropane Sulfonic Acid (ATBS) as its next area of focus.

ATBS is used to manufacture dispersants in water chemicals and polymers for Enhanced Oil Recovery (EOR), and also to give dye receptibility for acrylic fibre. Despite having numerous applications across several industries, Vinod found ATBS was not being manufactured in India. It was imported from the US and Japan.

“In 2002, with the technology from National Chemical Laboratory (NCL) in Pune, we started making ATBS at our manufacturing facility at Lote in Ratnagiri district in Maharashtra” Vinati says.

Till 2006, despite being a market leader in IBB and venturing into ATBS, the business was making just around Rs 66 crore revenue and Rs 2 crore profit. VOL was also unable to produce the right quality of ATBS.

Vinod was thinking of shutting down the ATBS unit or selling it. VOL had exhausted its resources and expertise in trying to crack the ATBS quality, but to no avail.

With only two other companies in the world making the chemical, and since it was a niche market, VOL was in a fix.

Things went on this way till 2006-07. That was the year Vinati joined her father’s business after returning from studying chemistry, engineering, and business in the US. She started from ground up, spending time in various VOL divisions and learning the ins-and-outs of its numerous business functions.

She managed to bring a consultant onboard and figured out a way to cut costs and improve productivity by optimising batch timings. This resulted in increased capacity with minimal investment.

“There was also considerable effort put in for improving the quality by engaging international R&D experts. This paid off when it resulted in a breakthrough and we figured out how to greatly improve the quality of our ATBS,” she says.

VOL ramped up its production of ATBS to 25,000 tonnes, becoming the world’s biggest manufacturer of the chemical. It went on to capture roughly 65 percent of the global market for the product, including its ATBS exports to China.

In 2006, VOL’s main competitor in the IBB market shut its operations, paving the way for VOL to capture 65 percent of the global market for IBB as well.

On the back of the landmark year, VOL’s revenues grew and touched Rs 1,000 crore.

Besides IBB and ATBS, in which it continues to be the world’s largest maker, it currently manufactures Isobutylene (IB) - an intermediate used in agro-based chemicals, food additives and anti-oxidants, high purity Methyl Tertiary Butyl Ether (HPMTBE) - a speciality solvent, N-Tertiary Butyl Acrylamide (TBA) - an ingredient used to increase viscosity of coatings and solutions, and N-Tertiary Octyl Acrylamide (TOA) - an ingredient used in personal care products such as hair gels and creams.

VOL exports these products to customers across the US, Europe, and Asia, continues to be competitive in cost and pricing, and enjoys the advantages of scale, it claims.

“With 65 percent market share, our growth is saturated. For a company, 15 percent growth is considered healthy but it’s difficult to grow at that rate when you have the major portion of the market. Hence, we have been using the surplus cash to fund growth through researching and launching new niche chemical products, even though some of them might be unsuccessful,” Vinati says.

When the COVID-19 pandemic spread, VOL paused its 1,000-member-strong operations and temporarily shut down its factories. Its plans for launching a factory for producing butylphenol were also delayed by a few months.

However, as its chemical products are used in the pharma and water treatment industries, it received an essential services permit for both facilities. VOL soon had the facilities back, up and running.

“Right now, 70 to 80 percent of the workforce is back. Demand for our products was not impacted much as overall decreased demand was offset by increased demand from pharma companies. We remained insulated as we served a diverse set of industries,” she says.

Vinati Organics is now poised to capitalise on a growing market for speciality chemicals which is being driven by consolidated demand for several industries such as textiles, consumer durables, packaged food, personal care, etc.

With numerous chemical companies in China shut in 2018 due to environment concerns, companies like VOL are set to meet the demand for uninterrupted supply of speciality chemicals in the market.

The Shoshaa show: Rising in a crowded imitation jewellery market