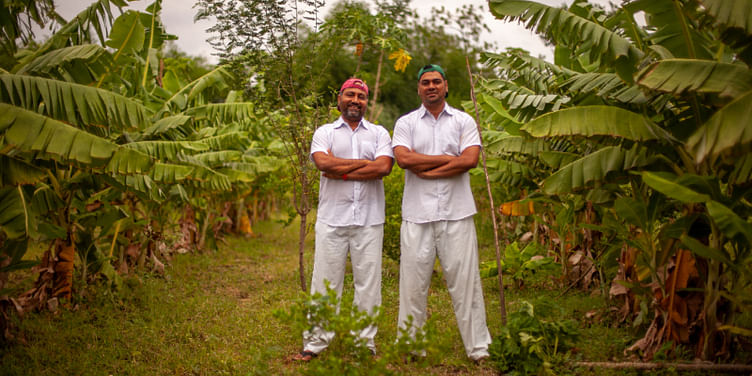 Two Brothers Organic Farms was started by Ajinkya and Satyajit Hange who, despite securing high-paying jobs, felt drawn to their agricultural roots. Today, the company is selling products in 680 cities across the world.

Going back to the roots and building from the ground up is not everyone’s cup of tea. However, after spending almost a decade working for corporates, two brothers – Satyajit and Ajinkya Hange – found their true calling in the agricultural sector.

“I was working with Citibank and Ajinkya was with HSBC. We had worked with a few corporates and later, we realised that we didn’t want to do this,” Satyajit tells SMBStory.

Satyajit further adds that his father did not want them to pursue farming as it had become “unsustainable, uneconomical and socially not acceptable”. Satyajit says that despite living in cities like Mumbai, Gurgaon and Pune, he and his brother were drawn to their roots.

A little before 2013, the brothers quit their high-paying jobs and shifted base to their native village. They decided to explore organic farming, mixing their passion for farming with the business acumen they had developed.

With land inherited from their father and ancestors and using their personal savings, they started Two Brothers Organic Farms (TBOF) as a seed-to-shelf organic products company in 2014.

“We decided to do our own experiments on the farms which included methods like poly-cropping, using natural manure and fertilisers, etc,” he adds.

Today, the brothers are selling pan India and even exporting to about 45 countries. TBOF’s top international markets include the US, New Zealand, Singapore, the Middle East, and Australia.

In total, it is selling its products in more than 680 cities.

“There are still customers who prefer buying from Amazon, hence, we have made ourselves available to them,” Satyajit says.

The company has been able to gain traction by focusing on social media. “Social media plays a very important role in generating interest and getting traffic to your website,” he adds.

On social media, ﻿Two Brothers Organic Farm ﻿ writes blogs, shares videos of their activities, puts up different kinds of posts etc. The brand has collaborated with schools in Pune to start ‘Organic Farming Clubs’ and claims to have impacted about 9,000 farmers by training them with various organic farming techniques.

Competition and the brand’s USP

But Satyajit remains unperturbed when it comes to competition. He says, “Most of the other brands in the market are only aggregators. There is no single brand which is owned by a farmer or knows the details about farming.”

Satyajit and Ajinkya say that having grown up watching agriculture and understand the pulse of this sector better than any of their competitors.

Going forward, Satyajit says they plan to leverage technology to bring about a complete revolution in the agricultural sector, which is in the need of innovation and technological upgradation.

The company is also working on developing a weather station that can be placed in the fields. This station will have a SIM card that will monitor moisture, wind speed, pest attacks etc, and all these notifications will come on the mobile phone of the TOBF team members.

The company also plans to introduce ERP systems into its day-to-day operations to make smart, intelligent and data-driven business decisions.

Moreover, Satyajit and Ajinkya are determined to break the notion among youngsters that a career in farming is not lucrative. They also dream of getting listed on the New York Stock Exchange.

“If so many IT companies can get listed, then why can’t a farmer’s company?”