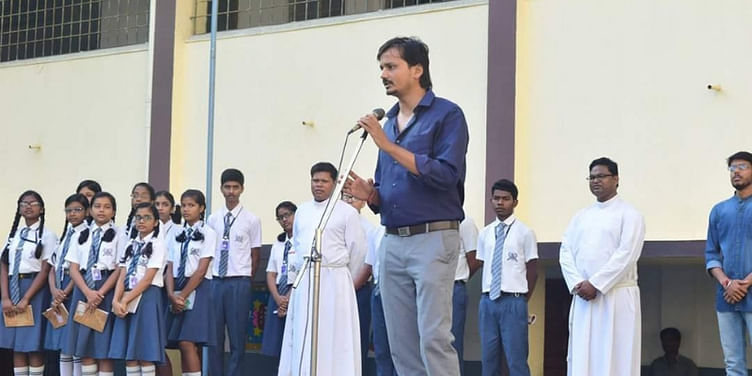 Rishab Anand’s The Cartoon Playschool teaches children about road safety and traffic rules. Since its inception in 2016, the organisation has covered 250 colleges and schools till date.

Jumping the red signal has become a common sight on Indian roads. According to government data, about 4,64,910 road accidents were reported in India in 2017 alone. This means 405 injuries, and 1,290 deaths every day.

With these numbers causing concern, many organisations, along with the government, are trying to instil the importance of following traffic rules in people.

Addressing this issue is Rise Up, an organisation led by Rishab Anand, which is conducting workshops on road safety in schools and colleges.

Rishab’s playschool, called the Cartoon Playschool, teaches children about road safety and traffic rules. Since its inception in 2016, the Jharkhand-based NGO has covered 250 colleges and schools till date.

Also read: Safety first – how these startups are ensuring you reach home safe

Speaking on the same, Rajshree Anand, President, Rise Up, said,

Gradually, we thought to build a sustainable model, in the form of a play school, so that at the foundation stage of a child, we could incorporate traffic rules and sense that would help them become globally aware citizens, reports Ranchi Blog.

Students are also taught entire aspects of road safety in a span of 36 months.

Explaining about his playschool to The Logical Indian, Rishab said,

It is a fact that what we learn during the early years of our lives, stays with us for a very long time. Prime examples being the alphabets and numbers. I realised that traffic sense is one of the topics which should be taught very early on in one’s life.

Before setting up the NGO, Rishab was a journalist, and lived in Bengaluru and Delhi. After witnessing the plight of traffic in these cities, he realised the situation was worse in smaller cities as the awareness level was very low.

Also read: What is India doing to put the brakes on the alarming number of roads accidents reported each year?

Hence, he shifted to Ranchi, his hometown in Jharkhand, to improve the situation. He initially started with a poster campaign. When the cause and his efforts started gaining traction, he, along with police authorities and city municipality, organised events to raise awareness. What started from Ranchi has now spread to four to five cities in the state.

Also read: Road to recovery: What needs to be done to cut down on road accidents and ensure a safer India?

Under a Delhi flyover, Van Phool School is changing the lives of young children