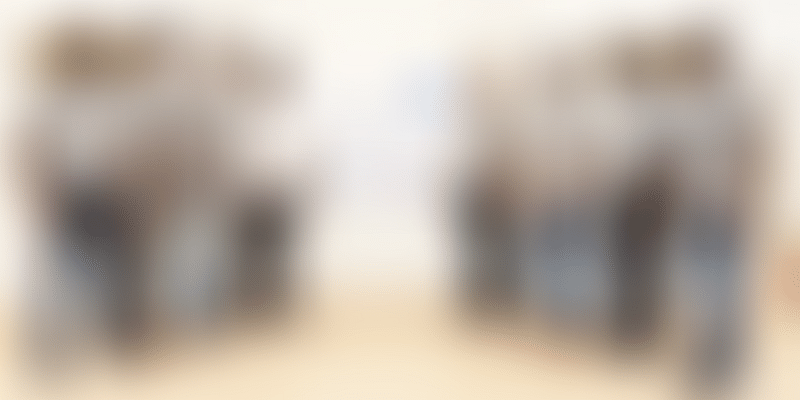 Chennai-based startup Aqua Connect has improved the livelihood of over 3,000 aqua farmers across India with the launch of FarmMOJO, a mobile application that can predict diseases in aquatic animals and suggest measures to enhance water quality.

Arul Prakash has been practicing aqua culture at Chidambaram, about 250 km from Chennai, Tamil Nadu, for over a year. However, he had to bear a considerable amount of loss since many of his shrimp died after being infected with disease.

“Identifying the exact cause of death in aquatic animals is extremely difficult. Most of the times it has to do with the quality of feed and the water in which they are cultivated. One minor miscalculation with regard to these factors is enough to affect profitability. The FarmMOJO mobile application came as a saviour. Not only did it have an in-built disease prediction model but also an advisory system to improve efficiency,” he tells YourStory.

India is the second largest producer of fisheries and aquaculture with the yield going up to 4.21 million tonnes in 2012-13 as per the Food and Agriculture Organization (FAO). More than 16.4 million people across the coastal regions of the country depend on aqua farming for their livelihood, according to a report published by the Ministry of Agriculture and Farmers Welfare. Only one in four farmers earns a substantial income to support themselves and their families. This can be attributed to the low penetration of technology in this industry.

Aqua Connect, a Chennai-based startup established by Rajamanohar Somasundaram, Sanjai Kumar, and Shanmuga Sundaram, is attempting to defy this trend by using technology to help aqua farmers boost their revenue by predicting diseases of animals and suggesting ways to enhance water quality. With the launch of its mobile application, FarmMOJO, the venture has added value to the lives of over 3,000 farmers across Gujarat, Tamil Nadu, and Andhra Pradesh.

The FarmMOJO application has benefited thousands of aqua farmers spread across 750 farms as of today. “We found out that the revenue of farmers increased by around 5 percent after using the app. It has also reduced the occurrence of diseases in 120 ponds by assisting farmers in taking corrective actions, thereby minimising losses,” notes Rajamanohar Somasundaram, Co-founder and CEO, Aqua Connect.

Baburao Mule, an aqua farmer, has been using the FarmMOJO app for the last eight months to cultivate shrimp in three of his ponds spanning 2.4 hectares in the town of Pardi, Gujarat.

“The application has multiple utilities – right from preventing diseases of animals to tracking their growth and feed and also determining water quality. The productivity of my cultivation has comparatively risen. I have also observed a reduction in wastage of feed,” he says.

How does the app function?

Aqua farming involves feeding and cultivating aquatic animals in freshwater ponds and later selling fully-grown produce in the marketplace. The key to raising healthy animals lies in the quality of feed and water.

“Since various factors like pH, acidity, ammonia and nitrate levels affect the quality of water, keeping a tab becomes tough for farmers. This is where FarmMOJO can help. Built using principles of artificial intelligence (AI) and machine learning (ML), the app acts as an advisor by indicating the chemical composition of water as well as measures to maintain consistency in case of an anomaly,” Rajamanohar says.

Aqua Connect coordinates with local communities residing close to the farm to collect water samples from freshwater ponds and deposit them in designated laboratories. Aqua Connect has employed 10 trained research analysts to test water and determine the results. The outcome of the examination is given out on the FarmMOJO app for farmers to view.

Besides this, the application also predicts diseases of fish and aquatic animals based on historic data models.

“Some of the prawns I had cultivated in my previous cycle died before they could fully grow. However, after I began using the FarmMOJO app, I was able to take preventive steps to avoid such unfortunate incidents. All I had to do was upload a picture of the prawns, enter a few details like area under cultivation, quantity, and type of feed,” Arul explains.

The FarmMOJO app charges Rs 1,500 per pond per farmer for a period of four months, which only amounts to 0.2 to 0.5 percent of the total cost of cultivation.

Aqua Connect was born out of serendipity. Or so says Founder-CEO Rajamanohar Somasundaram, more commonly known as Raj.

Raj, an IIT-Kanpur alumnus and a serial entrepreneur who was managing two companies - Hexolabs and Socialabs - in the consumer mobile and internet space, was traveling to his hometown, Chidambaram, in 2016. During his journey, he heard one of the co-passengers negotiating 'rates' and prices over the phone.

“He repeated the word ‘rate’ some six or seven times, but I couldn’t figure out what it was. Later, when I asked him, he said his family was engaged in the cultivation of shrimp for over two decades, but getting a good rate for the produce was always tricky. He also spoke about challenges like low productivity cycles and lack of technological intervention in the industry,” Rajamanohar recollects.

A year later, in 2017, the co-passenger Sanjai Kumar, Rajamanohar Somasundaram and Shanmuga Sundaram, a banker-turned-entrepreneur together launched Aqua Connect.

Since most aqua farmers in India struggle to gain access to lucrative marketplaces and advanced aquaculture practices, the enterprise started by focusing on organising this market across the entire value chain – the hatcheries that breed shrimps to cultivating them in ponds to selling the produce. In an earlier conversation with YourStory, the co-founders spoke about the web platform they initiated to serve as a full-fledged farm monitoring solution and at the same time connect farmers to vendors, suppliers, input manufacturers, and exporters.

The Android-based mobile application FarmMOJO was floated much later in March 2018 to help address the challenges in maintaining the health of fish, shrimps, lobsters, prawns and other aquatic animals during cultivation.

The 20-member organisation, which raised over Rs 2 crore as part of pre-seed funding and from service revenues in the initial few years, is about to close a Rs 14 crore round of funding from venture capitalists in the coming days.

Aqua Connect now aims to bring sustainable aqua farming to several other farmers across the country. It is looking forward to spread its wings to the coast of Odisha in the coming days. The startup is also planning to expand its reach to Indonesia by setting up a pilot project there.