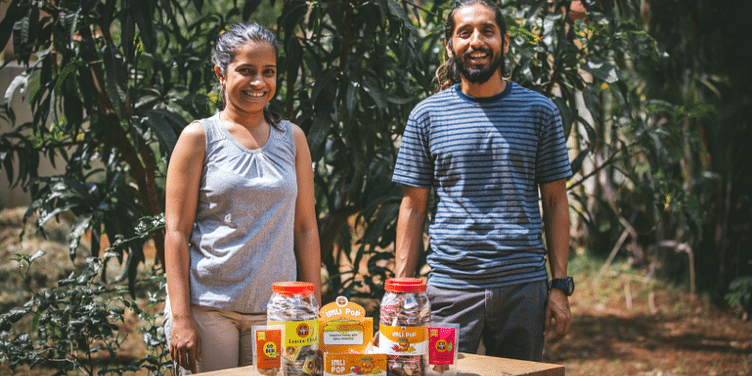 Bengaluru-based GO DESi Foods introduced six products sourced from rural micro-enterprises, with one single aim: to take you back to your roots.

What if the pack of chips you buy at a retail outlet was made by the same farmer who grew the potatoes? Or imagine, the homemade pickle you buy at a grocery store is packaged and sold by the same sweet grandmother who made them.

These thoughts drove Vinay Kothari, an MBA graduate from the Symbiosis Centre for Management and Human Resource Development, to start his own social enterprise GO DESi Foods. Here, he creates packaged food inspired by regional formats and flavours, sourced directly from the rural kitchens.

“Unlike other FMCG companies, our products are manufactured by microentrepreneurs, farmers cooperatives, and self-help groups. We have set up multiple micro units in rural and semi-urban areas to enable these enterprises to scale and create sustainable employment,” says Vinay.

The company’s flagship product Imli Pop, a traditional spicy-sour treat made of tamarind, jaggery, chillis and curry leaves, has become viral on ecommerce platforms like Amazon and Qtrove. GO DESi Foods claims that it sells over two lakh Imli Pops a month, across the 500 outlets in Bengaluru and Hyderabad.

“We prepare them like lollipops. Initially, we were making it with our hands as demand was small. But now, with increased demand, we have opted for machines. In future, we hope to open an imli pop factory,” Sumitra, a local micro-entrepreneur from North Karnataka says.

The Bengaluru-based social enterprise has more than eight manufacturers spread across North Karnataka. It claims to have created employment for over 60 women, supporting eight micro-enterprises. GO DESi Foods sells its products to distributors in Kerala, Andhra Pradesh, Gujarat, and Maharashtra. The company also sells online through its own website, and on Amazon and Qtrove.

It all started after a trek in the picturesque Western Ghats. All Vinay could think about was food. Famished and tired, he stopped at the first tapri (small local shops) he saw and devoured all that they had to offer.

“I tasted heavenly ‘jackfruit bars’ and ‘imli pops’. It was out of the world and without preservatives, colour or added sugar,” he remembers.

Vinay, who has worked in the FMCG sector for ten years, sensed an opportunity. On his way back, he picked up 30 kgs of various local snacks and confectionery. He knew a flea market would be happening the next weekend in Bengaluru, and booked a stall for three days.

He said, “We had no packaging or branding— only samples as tasters. We sold out in the first half of the first day itself that set us on our DESi path.”

Vinay quit his job at ITC, and inspired by the stories of Lijjat Papad and Amul, he set up GO DESi Foods in 2018.

Fast food and confectionary items have been primarily dominated by western formats and flavours. Vinay explains that while local, and regional products had “a large wallet share, there is no singular brand in the market”. He adds, “This is the white space we want to capitalise on.”

GO DESi Foods wants to be a part of a revolution, which can increase food processing as close to the farm gate as possible. This will reduce wastage, make agriculture sustainable, and create sustainable jobs in the rural economy.

In India, only 3-5 percent of total fruits and vegetables are processed against 30-35 percent globally. Since the concept of processing food at the farm gate is relatively new in India, farmers are forced to sell their produce to middlemen. There is also a lack of traceability in the system as consumers are unaware of the source of the food.

These challenges make sourcing food from rural kitchens a great opportunity as the end consumer is ensured the authenticity of the produce.

“The products we source and market have been in existence since decades and have come about because of various local needs like preserving fruits and vegetables, or as a natural candy for kids, etc. They came before terms like organic or preservatives existed, ” he explains.

Planning to build micro-units within the villages, Vinay approached farmers, local co-operative groups, NGOs, and self-help groups spread across North Karnataka. In the beginning, he was met with a lot of scepticism and distrust.

“There are always a lot of hurdles associated with setting up a micro unit. Irregular labour supply, lack of last mile connectivity, and the dearth of infrastructure are just a few of the many issues we faced. Though there is always an advantage in terms of the low cost of land and marginally lower cost of labour, getting the unorganised organised was the most challenging and interesting part of the process,” he recalls.

The 15-member team connected with the Hubli-based Deshpande Foundation, and Multipurpose Organisation for Training, Health, Education and Rehabilitation (MOTHER NGO), a non-profit based out of Sira in Tumakuru district, which focusses on developing alternative forms of livelihoods and development in rural areas. It helped GO DESi connect with women in villages and trained them to process the food produce, encouraging them to innovate items that had been handed to them for generations by their grandmothers and mothers.

Sashikala, a rural micro-entrepreneur who makes lemon chaat, a savoury confectionary made of dried lemon, salt and spices, initially used to prepare it for her children. She says,

“We didn’t know how to market this. Then I attended industrial training in Karwar and learned to mass produce the items in an identical manner. And after working with GO DESi, our market demand increased by 25 percent. We hope that the demand increases.”

With a vision to be the leading regional, traditional food brand in the confectionery space, GO DESi products are made in a traditional manner by locals who have tremendous knowledge about indigenous ingredients and flavours. This means that the products are not identical - rather, they look rustic. Very often, there were complaints from supermarkets when they went to sell to the urban market, and that their products were not “shelf-ready”.

Yet, Vinay refused to give in. He realised that he had to market this strength - source, production and packaging - directly from the farm and rural kitchens to the supermarkets and to the end consumers.

Since GO DESi carried out production at the farm gate, all raw materials are sourced from nearby farms. Each ingredient has its own unique flavour and taste, depending upon the region grown.

“Organic, natural products are not identical because that is how nature intended it to be. GO DESi wants to be a part of a revolution, which can increase food processing as close to the farm gate as possible. This will reduce wastage, make agriculture sustainable, and create sustainable jobs in the rural economy,” the 33-year-old explains.

“Our purpose is to be the slingshot for food processing movement at the farm gate,” he concludes.

Over the next year, GO DESi hopes to expand its distribution network to 3,000 outlets and create employment for 100 women in its micro units.

This man beat cerebral palsy to help tigers with music