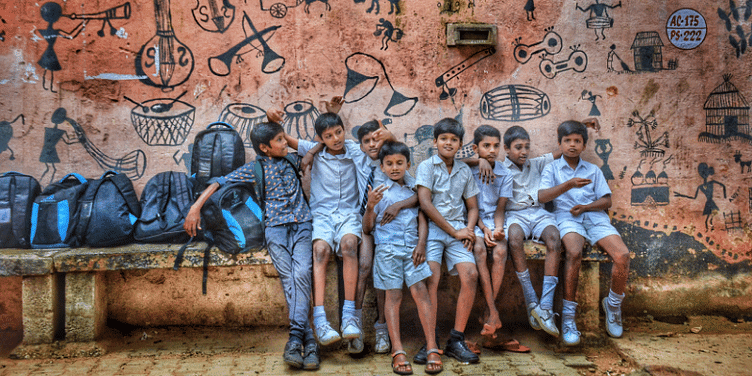 Bengaluru-based NGO Makkala Jagriti is enabling thousands of children to pursue their dreams by introducing holistic development models in government schools across Karnataka.

French poet Victor Hugo once said: “He who opens a school door closes a prison,” meaning education is the key to success. We all know that education is one of the most powerful tools one can use to change the world. However, there is little to cheer about our country’s performance on this front.

The Annual Status of Education Report (ASER), 2018 conducted a survey to assess the learning outcomes of children studying in government schools across rural India. Though the overall enrollment of children in school between the age group of six and 14 has been over 96 percent since 2010, only 27.2 percent of children belonging to Class III were able to read Class-II level textbooks. A meagre 34.7 percent of Class VI could perform basic arithmetic calculations like subtraction and division. And a dismal one out of four children were clearing Class VIII without acquiring fundamental reading skills.

In order to reduce this learning gap at the school level, Makkala Jagriti, a Bengaluru-based non-governmental organisation (NGO), was started by Joy Srinivasan in 2003.

The NGO initially started by sponsoring school education for children from marginalised backgrounds in and around Adugodi in Bengaluru. But today, they are enabling thousands of children to learn better by introducing holistic development models in government schools and the surrounding communities.

“Makkala Jagriti has been facilitating learning as well as development of children for the last 15 years, and has touched the lives of thousands of children since then,” Joy Srinivasan tells YourStory.

This engineer's NGO is kindling hope and bringing quality education to children in Naxal-affect...

Joy Srinivasan was the first woman to complete graduation in her family. Coming from a lower middle-class background herself, she knew the kind of constraints children and young adults had to face to get themselves educated. She had a strong desire to help them and this gave way for the establishment of Makkala Jagriti.

“I started the first learning center at a slum in Adugodi, Benglauru. The idea of a safe child-centric learning space was liked by many. That was when I decided to scale up. I am really happy that the organisation has grown to what it is today and impacted the lives of innumerable people in the process,” she says.

Imagine a vibrant and colourful space not limited by the boundaries of fixed syllabi or the constraints of academic pressure. A place where children could be nurtured to learn, grow, experiment, and discover themselves. This was the idea behind Makkala Jagriti creating learning centers by partnering with 45 government schools across Tumakuru, Gadag, Koppal and Bengaluru (rural and urban) in Karnataka.

“Most government schools do not have the will nor the resources to focus on aspects like holistic development and life skills. They tend to focus only on completing the curriculum, the emphasis being on getting good marks. The idea behind establishing learning centres within the premises of these schools was to encourage children to think beyond the four walls and inculcate essential skills like creativity, time management, and decision making,” says Murali M, Chief Functionary, Makkala Jagriti.

The NGO began its endeavour by introducing a holistic development model in government schools and partnered with the administration. Popularly called as SPICE, the organisation helps children develop and hone their skills in five spheres - social, physical, intellectual, creative, and emotional. These areas of competence were arrived at after carefully looking into all the factors that children of today’s times need in order to build a strong future for themselves.

“We worked with multiple stakeholders to get the model implemented on ground. To start with, we obtained the necessary approvals from the Principal Secretary and Department of Primary and Secondary Education, Karnataka. Immediately, we requested the schools to set aside one classroom in their campus for our learning centres,” Murali explains.

As soon as the organisation invited people to sign up as facilitators and volunteer to engage children, several entrepreneurs, homemakers, and working professionals showed willingness to contribute to the cause.

Makkala Jagriti went on to conduct a screening and selection process, after which the chosen facilitators were trained rigorously before stepping into the learning centres. The training module was such that it lasted for five weeks, and touched upon classroom management, child-centric teaching methods, and skill development among children.

The Makkala Jagriti facilitators spend one hour a day in dedicated learning centres with students ranging from Class I to VIII as per the time-table set by the schools. During this time, the children are steered to plunge themselves into a myriad set of activities according to the SPICE model - right from public speaking, theatre, poetry recitals, dance, singing, art and craft, storytelling, martial art forms like taekwondo and karate, as well as elementary tasks like reading and writing. These activities are in turn targeted towards honing the social, physical, intellectual, creative and emotional skills of the children.

“If you walk into one of our learning centres at any point in time, you will see students sitting on the ground, immersed in fun activities and working on team-building exercises. You can observe the joy in their faces as they play games, read stories together, and explore hidden talents,” says Sunayana Chatrapathy, Deputy Director, Programmes, Makkala Jagriti.

An investment beyond children

The children, who mostly come from marginalised and vulnerable communities, either reside in slums or small dwellings on the outskirts of the city. Not having well-educated people in the family, combined with poverty, inadequacy, and a general lack of confidence, makes it difficult for them to get ahead in school.

“We have come across children who possess an unstable mental and emotional state of mind because of a particular personal trauma, alcoholic parents, abusive family members, and an unsupportive environment at home on the whole. This was when we decided to introduce parental workshops and retreats,” notes Sunayana.

Makkala Jagriti also organises workshops and events on a periodic basis for parents, where they are given an orientation about how to nurture parent-child relationships, providing a safe and conducive environment at home, giving attention to children’s progress, and even expressing emotions like love and care.

Fourteen-year-old Sudha R, a student studying in Class VIII at the government high school in Santhe Beedi, Yeshwanthapura, Bengaluru, was once a shy and reclusive kid. She hated attending classes at school, did not have any friends, and showed little interest in academics. In the year 2016, Makkala Jagriti introduced the SPICE model in her school and opened a learning centre within the campus. And then, people could see a complete change in her personality.

“Being a part of the Makkala Jagriti’s learning centre gave me a sense of freedom. I liked the entire idea of indulging in interesting activities and unrestricted play time. The facilitators were approachable and kind. It gave me the opportunity to do things I truly enjoyed, without the fear of being mocked at or judged. It helped me get acquainted to people and I slowly began opening up. During the course of attending their classes, I realised my calling towards dance. Recently, I even pulled off a dance performance amidst an audience of 500 people at Chowdiah Memorial Hall in Bengaluru,” she says.

HV Parimala, who has been teaching science and mathematics in the school for over 17 years, says: “I have observed the confidence level of students shooting up. They were able to concentrate better and analyse problem statements more quickly. Even the slow learners in my class could grasp concepts without much hassle,” Parimala quips.

Makkala Jagriti has been strengthening the public education system by institutionalising the SPICE model within government schools for over a decade now. The organisation reached out to around 9,400 children between the age of six and 14 years in 2018. Over 30 facilitators were involved in imparting 15,000 hours of holistic learning during this time.

The organisation has collaborated with many institutions and organisations like Deccan Taekwondo Academy, Flying Feet, and Hippo Campus, and is looking forward to work in tandem with the government. While most of the organisation’s funds have flowed from corporates like Wipro, Ellucian, Yahoo and Target, it has also received donations from individual contributors and through crowdsourcing platforms.