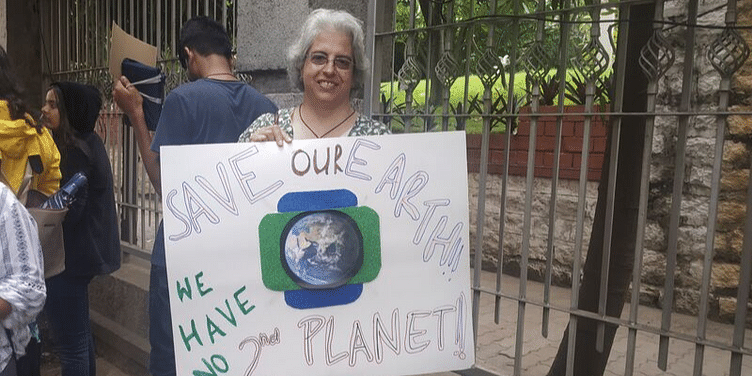 For one week since last Friday, FridaysForFriday organised an event each day, including a panel discussion and cleaning drives at places like Kalkere Lake, Bellandur and Kengeri on World Clean Up Day.

Concluding the World Climate Week on Friday, protestors young and old came together and marched from Nayana Auditorium to the city Town Hall in Bengaluru.

Extinction Rebellion India, Jhatkaa.org and Fridays For Future Bangalore chapter together organised the march and a series of environmental related events for one week since last Friday.

Sisters Riya and Muskan Shiva Kumar who are studying Delhi Public School in East Bangalore were among the protesters.

They could resonate with what 16-year-old climate change activist Greta Thunberg had to say. They say, “As much awareness and urgency we are trying to put out, people are still not taking us seriously. I think that’s what is lacking and scary.”

Disha A Ravi, coordinator of Bangalore chapter of FridaysForFuture said she wanted to start something similar to the global movement in Bangalore. She met a few other like-minded people and organised the first strike earlier in March this year.

As they reached the Town Hall, Disha spoke of how the movement has come to be, followed by Vibha Kaushik, a student speaker from Vibha Niketan, who called for the need for a climate emergency.

For one week since last Friday, they have organised an event each day including a panel discussion. Yellappa Reddy, the former secretary of environment and ecology, Karnataka, and Harini Nagendra, professor of sustainability at Azim Premji University, were among the panellists.

Initiatives also included a cleaning drive at places like Kalkere Lake, Bellandur and Kengeri on World Clean Up Day on September 21, in the past week.

Liza Christopher, a Class 11 student at Vidyashilp Academy, said, “Right now, we can do small things to resist. Soon, it will come to a point where we can’t just do small things.”

Sathwik Agastya, a Class 6 student of SSRVM Trust, told YourStory of the pollution and worsening air quality in India. “There will be sudden rain and sudden sun,” he added, speaking of the extreme impacts of climate change.

According to Disha, around a thousand people gathered on both the Fridays, with an increased student turnout.

Much like Greta Thunberg, this 11-year-old environmentalist from Uttarakhand has sued the India...