Nothing succeeds like success for these agroforestry farmers in Cauvery basin 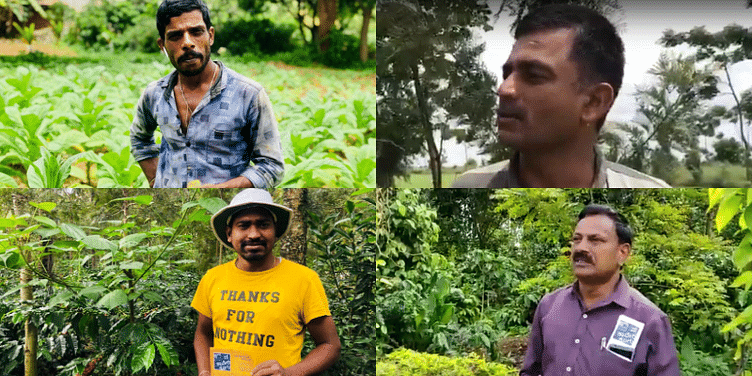 We’ve heard about endless tales of despair and hopelessness from the rural hinterlands. But, when the Cauvery Calling team traveled to the river basin, they got to hear some heart-warming stories of success even amidst harsh realities.

“Yes, I’m doing many things wrong. You think farmers started all this by themselves? Intelligent people like you from cities came one day in the ‘70s and asked us to use fertilizers; they came in the ‘90s and told us to use Jersey and HF breeds (cow breeds); then tobacco industries came and asked us to grow tobacco; they then told us to use pesticides and insecticides. Intelligent people from cities are coming and telling us to do everything, and then you come and question what we’re doing,” says an angry farmer from a small village in Hunsur taluk in Mysuru district of Karnataka.

Touring farms in the Cauvery basin of Karnataka, we wanted to understand the realities of farming on a land that had unhealthy soil and an alarming water scarcity. While we wanted to engage the farmer in a conversation, we got off on the wrong foot by asking why he’s growing tobacco when he knows it’s bad for his own health and his community’s.

Hunsur and Periyapatna taluks in Mysuru, popularly known as the tobacco capitals of Karnataka, grow Virginia, one of the finest tobaccos that commands a premium rate. But the farmer community is paying a price.

PL Ramana, a successful agroforestry farmer in Periyapatna, has stayed clear of tobacco cultivation. When we visited his farm, Ramana spoke about the tobacco farmers.

“They keep saying ‘we’re not getting a good price’ for tobacco. Nobody is going to buy it here, and it has to be given to the board (tobacco board). If it’s rejected there, they will be badly hit financially. We’re growing the maximum tobacco in Periyapatna taluk. But if you test three children, one or two will have cancer. By growing tobacco here, what we’re gifting our future generations is cancer. So, it’s best for these farmers to stop growing tobacco and start growing food crops,” he says.

However, the tobacco farmers, who seem to have thrown in the towel, say it’s not that simple. “Give us an alternative that fetches the same amount of money in the same short harvest, and we’ll happily discard tobacco,” they say. One vociferous farmer offers to go all the way to Delhi to advocate with “namma pradhaani Modi avaru” (our PM Modi ji) to “ban tobacco in Karnataka” if there’s an equally lucrative alternative.

“It’s a question of our livelihood. It’s not as simple as you think. Do you expect us to grow Kashmir apples here? Every region grows what is best suited in that climate. Tobacco grows best here. We can harvest it in a few months and it gives us good money,” says the Delhi-chalo farmer.

Ramana is frustrated with this kind of talk. He’s been there, done that. He knows there’s another way. “Food crops are consumed by everyone, and tobacco is used only by a few people - maybe the rich who smoke cigarettes. Farmers have to understand this,” he says.

Meet the man who has solved water woes of farmers in Bundelkhand, and given the parched region a new lease of life

Ramana tells us about his own experiment of growing a mini-forest on a barren land that no one wanted to touch.

“I’m a government servant from the forest department. This is a 24-hour job. I only get to work on the farm a few hours a day. These farmers are doing farming full time – they can do a much better job than me. They’re growing tobacco in five acres of land, and they say they don’t get Rs 5 lakh. I grow all kinds of food crops and trees on 2.29 acres, and I’m earning Rs 15 lakh to Rs 20 lakh per year,” says Ramana, who practises agroforestry.

Ramana is more than happy to tell us his story. He lost his father when he was three years old. From the time he was in Class VI, he worked to put himself through school and college. “My mother became a daily wage earner to bring us up. She is illiterate but she’s very sharp,” he says, overwhelmed by the memories of a hard life. He, his mother, and two older sisters barely scraped through those days. Ramana took on any job that would pay him a few rupees so he could complete his education. It’s clear the man is determined. He speaks with a passion and intensity that you often see in people who dream big.

“We used to offer this land to people to farm but everyone would reject it saying it’s too rocky and barren, and nothing will grow on it. So, I decided to work on it myself. I grow guava, apple, cardamom, gooseberry, coffee, pepper, and all varieties of trees...the trees are very sturdy and their roots run deep and strong. No matter how hard it rains, the water gets into the ground because of the tree roots, and the water tables are recharging very well here,” he says, standing amidst lush greenery. There’s an unmistakable zing in the air.

Agroforestry has not only helped his economics, but has done wonders for this once barren land. Standing in the fresh soil with the fruity aroma, it’s difficult to imagine this land was once considered non-arable. So, there is an alternative to tobacco in tobacco land.

Ramesh, another tobacco farmer in Holenarsipura in Hassan district of Karnataka, knows this, but he’s dealing with a double whammy. Nearly a decade ago, he shifted from conventional farming to tobacco production. That’s where the money was, he says. Excessive fertilizer use over time has destroyed his soil and his crop is of poor quality. The tobacco company that buys from him won’t buy his produce next year. The soil is sick and the crop is sick. They say there’s too much chemical in his produce - completely missing the irony.

“There are plenty of other tobacco farmers like me in this region. If the government supports us to transition to agroforestry, of course, we will...in our own interest,” he says. Ramesh is still paying interest on a loan he took for a medical emergency during his wife’s pregnancy. One or two timber trees on his farmland would have given him the loan amount and saved him from the loan sharks.

Ramana believes most farmers have lost their way. There’s not enough guidance on market demand. If there was, all of them would switch to agroforestry.

“Our farmers want to farm and they want to earn,” he says. “But they grow crops without thinking about the market. Does it have a market all year round, or only at certain times? Where to sell the produce? These are the things all farmers are not well-versed with,” he says.

But Ramana’s assumptions may not be entirely true. Mallikarjuna of Alur taluk in Hassan welcomes us to his 15-acre plot. The 31-year-old is a new-generation farmer. “The youth must come and spend time on farms instead of sitting in their cubicle boxes,” he says, clearly establishing the ground rules for this interaction: listen more, talk less. His farm looks like a dense forest.

Just eight years ago, Mallikurjana was in dire straits – he was under severe financial stress with his water-distressed farm. That’s when he decided to switch to agroforestry.

“In seven to eight years, my income has increased by 60 percent,” he says. That’s all it took to inspire eight families in his neighbourhood to switch to agroforestry. He says his success has helped to convert at least 100 acres to agroforestry in his community. “I’m most amazed by the staggering increase in soil fertility,” says Mallikarjuna. Naturally, this has led to better water sequestration, and he no longer faces water shortage.

Healthy food in your backyard, a substantial jump in income, healthy soil, abundant water – what’s not to love? Agroforestry checks all the right boxes but what really seals the deal in its favour is its non-combative embrace of both economics and ecology.

Till about five decades ago, this was the only way the Indian farmer knew to farm. Traditional farmers with native wisdom and a deep sense of connectedness with the earth had always practised “sustainable living” – long before it became a pop catch phrase. It’s time to reignite this connection.

Nataraj, a farmer in Periyapatna, says:

“We have no choice. All of us must take to agroforestry now. It works in every way – it’s good for the environment, it influences rain patterns, it increases income - it’s good in every way. If we continue to fell trees at the rate we’re doing now, mark my words, very soon all of us will have to carry oxygen tanks on our backs to breathe”.

Farming for the future

In 2015, India became the first nation in the world to adopt an agroforestry policy. Agroforestry is the practice of growing trees or shrubs along and around conventional crops, which increases biodiversity and reduces erosion.

Ashish Mandol, one of the advisors in framing the policy, says it’s a good move and one that’s necessary. “As land-holding size is shrinking, combining tree farming with agriculture is the only way to optimise farm productivity,” says Mandol.

With the Indian government agreeing to relax protective laws that regulate planting and harvesting high-value trees, more farmers are expected to take to agroforestry because it makes economic sense, and it’s good for health.

In Shravananahalli village in Hassan, 13-year-old Rakshita says she wants to become a doctor. Her parents cultivate tobacco and work only four months in a year and struggle to earn daily wages the rest of the time.

“There’s no healthcare facility in my village,” she says. “People are always sick because of the tobacco. I want to become a doctor and treat them,” says the frail, undernourished girl with big dreams. Her clinic will not charge for medical services, she adds.

“Tobacco farming is taking away the trees, causing soil and water pollution and leading to health issues in the community,” says the girl whose circumstances have made her wise beyond her age.

For Rakshita’s generation to fulfill their dreams, their parents must adopt farming practices that are economically lucrative and ecologically sustainable so their children can dare to dream and pursue their ambitions. Agroforestry offers this opportunity and has the potential of becoming one of rural India’s biggest drivers of economic prosperity – a legacy worth leaving behind for our children.