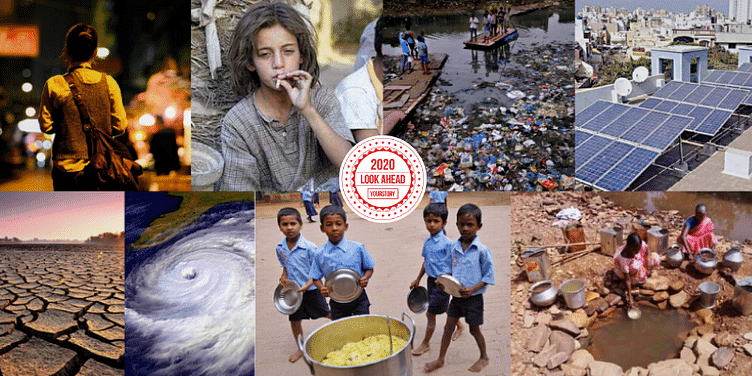 As we step into a new year and the beginning of a new decade, there is a lot to look forward to and a lot to learn from the past.

While ‘sustainability’ and ‘environment-friendly’ are words we have heard a lot in the last few years, we have a lot to do in both areas. In fact, there are several areas – more than you can imagine – that need our focus, energy, and resources.

But as they say, let’s take one step at a time. SocialStory lists seven key issues that we need to focus on in 2020.

No longer a buzzword for the few, climate change is now plaguing the entire planet. In India alone, in 2018-2019, almost 2,400 individuals lost their lives due to climate change.

This was mainly because of natural disasters such as cyclones and floods, reports the environment ministry. According to the India Meteorological Department (IMD), average temperatures have increased by 0.6 degrees Celsius (°C) between 1901-10 and 2009-18.

While it may look trivial, but projections deeper paint a far more alarming picture. For instance, the World Bank estimates, if climate change continues unhindered, average temperatures in India could reach as high as 29.1° C by the end of the century (up from 25.1° C currently).

Farmers will be the most affected by this but other workers can be affected as well. In industries such as construction, high temperatures will make life miserable for factory workers, decreasing their productivity.

According to the International Labour Organisation, the loss in productivity by 2030 due to heat stress could be the equivalent of India losing 34 million full-time jobs (up from 15 million in 1995)— the highest among the world’s most populous nations.

India is facing its worst groundwater crises in history. Reports say that 21 cities in the country will run out of groundwater by 2020, including Hyderabad, Delhi, Chennai, and Bengaluru.

With nearly 600 million Indians facing high-to-extreme water stress – where more than 40 percent of the annually available surface water is used every year – and about 200,000 people dying annually due to inadequate access to safe water, the situation is likely to worsen as the demand for water will exceed the supply by 2050, said the ‘Composite Water Management Index’ (CWMI) report released on June 14, 2019.

According to FAO in The State of Food Security and Nutrition in the World, 2019 report, 194.4 million people are undernourished in India – 14.5 percent of the population. Also, 51.4 percent of women aged between 15 and 49 years are anaemic.

The report further reveals that 37.9 percent of children aged under five in India are stunted (too short for their age), while 20.8 percent suffer from wasting, meaning their weight is too low for their height.

Malnourished children also have a higher risk of death from common childhood illnesses such as diarrhoea, pneumonia, and malaria.

The Global Hunger Index 2018 ranks India at 103 out of 119 countries on the basis of three leading indicators – prevalence of wasting and stunting in children under five years, under five child mortality rate, and the proportion of undernourished in the population.

On the other hand, it is estimated that nearly one-third of the food produced in the world for human consumption every year is lost or gets wasted. Reports reveal 40 percent of fruits and vegetables, and 30 percent of cereals produced are lost due to inefficient supply chain management and do not reach the consumer markets. While significant levels of food losses occur upstream at harvest and during post-harvest handling, a lot of food is lost or wasted during distribution and consumption stages.

Some food is also wasted on the shelves and in warehouses of food businesses due to excess production, the introduction of new products, labelling errors, and shorter shelf lives.

Such food items could be saved by timely withdrawing it from the distribution network, aggregating it, and then redirecting it to the people in need.

It’s important for everyone from the government to corporates and individuals to join hands to make India a safer place for women to live and work.

Looking at state-wise data, Uttar Pradesh has again topped the list with 56,011 cases of crime against women, followed by Maharashtra with 31,979 cases, and West Bengal at 30,002.

A total of 32,559 rapes were reported in 2017 in India, with rape by known persons still constituting a large percentage of all the cases reported. At least in 93.1 percent cases, the victims knew the perpetrator.

More reported cases also mean that more women are now speaking up. Especially in the light of movements like Me Too, Times Up, 16 Days of Activism, etc., are highlighting how you can stand up and fight against these atrocities.

In 2020, the government and society both need to take better measures to ensure that women are safe at home, workplaces, and in public.

According to a 2019 report by the Ministry of Social Justice and Empowerment, drug use was listed as an issue of major concern. The report establishes that a substantial number of people use psychoactive substances in India, with adult men facing the maximum brunt of substance use disorders.

Alcohol is the most psychoactive substance used by Indians, with 14.6 percent of the population between 10 and 75 years of age consuming alcohol – around 16 crore Indians. States with the highest alcohol use are Chhattisgarh, Uttar Pradesh, Punjab, Tripura, Arunachal Pradesh, and Goa.

After Alcohol, cannabis and opioids are the next most commonly used substances in India. About 2.81 percent of the population (3.1 crores) of individuals reports having used cannabis within the previous year. States with the highest cannabis usage are Uttar Pradesh, Punjab, Sikkim, Chhattisgarh, and Delhi.

About 2.1 percent use opioids such as heroin and a variety of pharmaceutical opioids while 8.6 lakh individuals inject drugs.

A sizable amount of the population that uses other drugs such as sedatives and inhalants also need help. Prevention programmes, rehabilitation centres, sustained treatment, and support groups can help pave the way to stop people, especially children from succumbing to drugs.

According to a study by Civil Digital, India produces 42 million tonnes of waste annually, and per capita waste is increasing by 1.3 percent per annum.

Due to rapid urbanisation and increasing population, we are seeing a lot of domestic, chemical, and industrial waste generated across the country. This waste, when left untreated, can lead to many problems, including the spread of harmful diseases.

The key to efficient waste management is to ensure its segregation at the source – either through recycling, minimisation, or proper disposal.

There are a number of methods of treating this waste, be it organic composting or vermicomposting for biodegradable waste. Bio-methanation, which converts waste to energy, sanitary landfilling, and treating of electric and bio-medical waste separately.

With traditional wisdom and ecofriendly practices, these startups are building sustainable houses

India has the fourth most attractive renewable energy market in the world. As of October 2018, India ranked fifth in installed renewable energy capacity. According to 2018 Climatescope report, the country ranked second among emerging economies to lead the transition to clean energy.

Installed renewable power generation capacity has increased at a fast pace over the past few years, at a CAGR of 19.78 percent between FY14 and FY18. Also, the government has shifted to clean energy after it ratified the Paris Agreement.

With increased support from the government and improved economics, the sector has become quite attractive from the investors’ perspective.

As India looks to meet energy demands, which is expected to reach 15,820 TWh by 2040, renewable energy will play an important role in this.