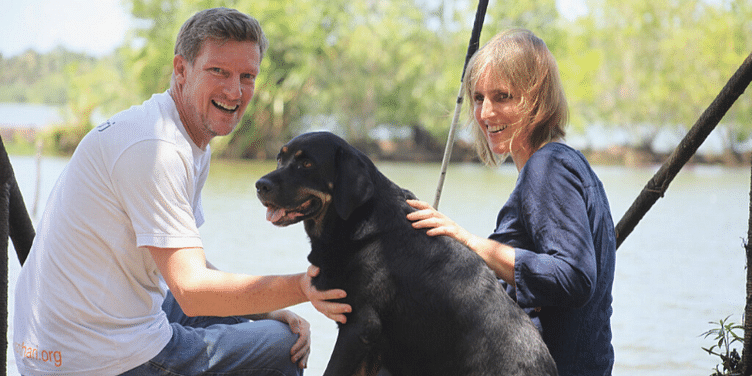 Founded by Paul Kronenberg and Sabriye Tenberken in 2005, kanthari is helping some of the most marginalised people to gain all the required skills and knowledge to drive social change.

Forty-eight-year-old Jyotshna Rani Das was on the brink of attempting suicide after putting up with domestic violence for five long and painful years. Her then partner used to harass her quoting dowry as a reason. In 2000, she left her home in the Balasore district of Odisha along with her two sons to start afresh.

After a few years of juggling between different jobs and earning just enough to survive, Jyotshna felt the need to help and empower other women experiencing abuse.

“The National Family Health Survey (NFHS-4) states that about 31 percent of married women tend to suffer from physical, sexual, or emotional violence by their spouses. I wanted to lend a hand to these women and provide them with skills and opportunities to lead a secure life. Despite having a sketch, as well as a plan in place, I did not know how to go about executing it until I joined the kanthari Leadership Programme at Thiruvananthapuram, Kerala,” Jyotshna says.

Founded by Paul Kronenberg and Sabriye Tenberken in 2005, kanthari equips some of the most marginalised people with all the required tools and skills to drive social change. The organisation fulfils this by training these individuals free-of-cost for a year on subjects like project planning, accounting and fundraising, policymaking, public speaking, and branding.

The programme is split into seven months of in-campus training and five months of mentorship assistance during which the individuals can set up their enterprises.

SocialStory met Paul on a train as part of the Jagriti Yatra, during which he said,

“The idea behind establishing kanthari is to enable individuals to address plaguing social issues and bring about a transformation in their communities. We take in people from across the world with various economic and cultural backgrounds. While some hold a degree, others come with no formal education. Right from physically-challenged people to rape and acid survivors, we welcome all.”

So far, 226 people have completed the kanthari programme, of which 130 have already established their NGOs or social ventures in verticals including alternative education, disability, human rights, and environment, among others.

Social entrepreneur sets tribes in Nagaland on the path to progress

The inception of kanthari

Paul first met Sabriye in 1997 when the duo was backpacking in Tibet. The 27-year-old visually-challenged Sabriye and Paul soon struck a conversation, only to find out that Sabriye was exploring the idea of starting a school for the blind in the region.

“Sabriye had discovered that a major chunk of the Tibetan population held a stigma against people with disabilities, especially the blind. She explained that the issue was so deep-rooted that visually challenged and blind children were either neglected or treated poorly. I told Sabriye to call me when she was ready to start this. About eight months later she did, and I decided to quit my job and join her in the endeavour to kick start the first school for the blind in Tibet,” Paul recollects.

The duo founded the organisation, ‘Braille Without Borders’, and set up the first school for the blind, a vocational training farm, a Braille printing press, and a self-integration programme in Tibet.

In 2005, Paul and Sabriye decided to start a leadership training centre for those who have been facing various social issues. However, their journey was not easy.

The duo spent over five years doing the necessary groundwork, talking to NGOs in the locality, scavenging for land, and completing the legal paperwork before constructing the campus.

Paul and Sabriye decided to name the organisation, ‘kanthari’ after they derived a commonality between their cause and a perennial plant called Kanthari in Kerala, that grows spicy tiny chillies with medicinal values.

“Just like how consuming a chilly can have an immediate impact on people’s bodies, the leadership programme was intended to bring about an impact in the society at large,” he adds.

Enabling people to make a difference

kanthari’s leadership programme involves a series of training sessions and activities targeted to help the participants establish organisations that can uplift the community around them. The curriculum has been designed in such a way that it falls under five different acts.

“At kanthari, our focus is always on guiding people to think out-of-the-box and challenge the status quo. The programme takes participants through a journey that can provoke habits, thoughts, and actions. Since most of the individuals who join the programme are from the margins of society, they are in a better position to understand the roots of the problems that are plaguing the world today. We give them tools and the confidence to resolve them,” Paul adds.

Anyone who is 22-years or older, has an intermediary degree in English and basic computer skills, and who has overcome adversity to create a positive impact in society, is eligible to apply to kanthari, immaterial of their academic background or their nationality.

At present, the programme has about five teaching staff popularly known as ‘catalysts’ who hold various niche skill sets. kanthari has been receiving financial support from both individuals, as well as business entities which include the likes of Philanthropist Sudha Murthy.

Jyotshna Rani Das is just one success story that brewed from kanthari. After completing the course with the organisation, Jyotshna went on to set up a charitable organisation called Janamangal in Odisha. Today, she provides sustainable livelihoods to more than 1,500 tribal women affected by domestic violence.

“My life took a turn for the better when I joined kanthari in 2013. The programme equipped me with all the know-how I needed to be a changemaker. Now, I can empower more women like me to earn on their own, speak up for themselves, and lead a dignified life,” she says.

Going forward, kanthari is planning to expand its reach organically and is looking to rope in more participants in its programme.

"Soon, I wish to see a world full of kantharis, who think beyond their interest and have the guts to stop injustice and the energy to start a change from within," Sabriye Tenberken, Co-founder, kanthari, concludes.