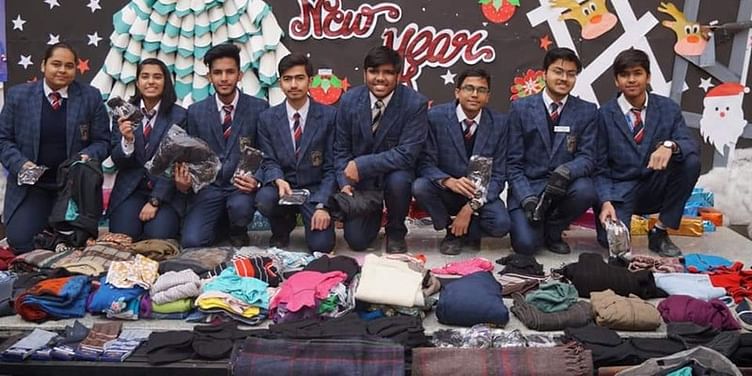 Roti Bank collects fresh rotis on an everyday basis and distributes it to those who cannot afford a single square meal a day.

If there is one thing that most of us cannot conquer, it is hunger. With a plethora of dine-in options available today, only some of the privileged ones have access to them with ease. But in a country of over 1.2 billion people, not all can claim to do that.

According to a report published by the Food and Agriculture Organisation (FAO), over 190 million people suffered from malnutrition and hunger in India in 2019. To call the situation dire would be an understatement.

To address the hunger issue, Rajkumar Bhatia, Sudhir Behrani, and Sonik Sidana started Roti Bank in 2015. The social organisation, which has been in operation since 2015, serves hot baked rotis and also goes around cities taking food from events, homes, and social gatherings, which is later fed to the underprivileged.

The team adheres to its vision statement, ‘Koi Bhookha Na Rahe’ (Nobody should be hungry).

It all started on a summer’s day in Delhi’s Azadpur Mandi, the largest fruit and vegetable market in India. The founders encountered a man who came to them asking for a job. But they had to turn him down as their business of selling fruits operated on fixed labour.

They offered to give him some money, but he requested for some food. At that moment, it struck to them that many people’s primary concern was to get rid of their hunger. It was then that they came up with the idea of Roti Bank.

From June 20, 2015 onwards, they started bringing rotis and distributed them among those in need. They also placed a box in the market and endorsed the idea of donating rotis to the visitors and passers-by, post which the number of packets in the box started increasing.

“We started with just seven packets in 2015. Today, we collect and distribute about 3,200 packets every day from our centres,” says Sudhir. “We have a minimum of two volunteers at each of these centres.”

Roti Bank has about 71 centres spread across Delhi, including Azadpur Mandi, Tilak Nagar, Dwarka, Lajpat Nagar, and Rohini, as well as in other cities like Jaipur, Kanpur, Gwalior, and Mumbai.

But sustaining such a huge operation on a daily basis is not an easy task. So how do they do it? They depend on the kindness of people. The organisation does not accept any monetary contributions but in case anyone wants to contribute, they can do so in the form of food packets.

And if one is unable to cook the food themselves, they can get in touch with one of their vendors who prepare the food. The organisation found that people make a point to donate on special occasions, especially on birthdays and anniversaries.

“As a birthday gift to my friends, I contribute in the form of roti packets on the occasion,” says Alka Kapur, who has served as the principal of Modern Public School, Shalimar Bagh for the last 20 years. “Instead of spending on fruitless gifts, I make the contribution and inform them about it.”

“Sudhir told me he started Roti Bank and approached me about this in November, and I thought this was quite gratifying,” says Alka Kapur, the school’s principal. “So, in December of that year, I decided to spread the idea among my students.”

A collection box attributed to Roti Bank is placed within the premises and saw a whopping 1,000 packets donated on the very first day. This inspired the concept of Miljhul Meal – people coming together to hand out food. This is done on an everyday basis at MPS.

The students contribute freshly cooked meals along with other useful items such as pens, pencils, and notebooks, and distribute them in the slum areas themselves. Teachers also encourage parents to add to the cause because of which contributions come not just in the form of rotis, but also toys, sweaters, blankets, sanitary items, etc.

“I feel this novel approach is an important element in character building,” explains Sindhu Vinod, a parent of one of the students at MPS. “When my child tells me she needs rotis for Roti Bank, that inculcated compassion is well-reflected. So, it feels good to be a part of this.”

“Many a time, we face a situation where children ask for food for the evening as well,” exclaims Sudhir. “As much as we would like to provide the same, it feels like the 3,200 packets seem insufficient.”

The team says it sometimes receives calls late in the night with requests to distribute food. However, this is not feasible as the food might get stale by the next morning. Also, the team consists of working professionals who are unable to collect and distribute food that comes in late at night.

“When we’re not working, it bothers me that we won’t be able to contribute to the bank,” says Alka. “That means 1,000 packets a day, for at least five days in a month, aren’t being distributed. So, I try to implement the birthday contributions on these days.”

Seeing the impact of the cause in the lives of those in need, the students of MPS have become quite passionate about Roti Bank and have started to understand the value of a meal. Many of them now encourage their families to prevent food wastage, especially when they hear of people complaining about their meals.

“It makes me very happy that my school is helping feed the empty stomachs. On my birthday, I make sure to donate extra packets to the bank,” says Savitur Sharma, a student of MPS.

In order to reach out to more people, Roti Bank has plans to target places with a significant number of people who are unable to source regular meals. They plan to start a bank wherever there is a requirement.

“We have about 50 schools under the Delhi Sahodaya School Complex. Being the president of this association, I have been encouraging schools to take up this initiative,” explains Alka. “It’s gradual progress, but it’s definitely going to happen in the coming years.”

Addressing India and the rest of the world’s problem to feed a large portion of the population, Mahatma Gandhi once said, “There are people in the world so hungry that God cannot appear to them except in the form of bread.”

With initiatives like Roti Bank, worrying about getting food to eat might just become a thing of the past.