Coronavirus: This village in Kerala is using umbrellas to practise social distancing 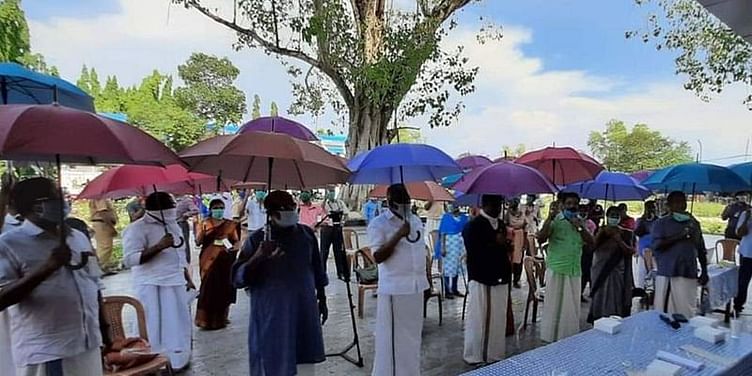 The village's civic body is ensuring that every resident in the area gets umbrellas, and is also distributing it for free to those in need of it.

The coronavirus pandemic has claimed over 1,600 lives in India, recording about 50,000 positive cases. With the global numbers crossing 3.7 million positive cases, hygienic practices and social distancing have become the need of the hour.

People, however, fail to meet these requirements of prevention. At many places, where there is a crowd around grocery stores, spaces have been demarcated to maintain a safe distance between two individuals.

To ensure the same, residents of a village in Alappuzha, Kerala, are now practising social distancing with a monsoon essential – an umbrella. The local civic body is ensuring that umbrellas are made available to people in the area.

“A gap of two opened umbrellas between people – with one person holding up each – would mean at least one-metre distance is ensured between the two people,” Rema Madanan, a panchayat official, explained, as reported by NDTV.

Kerala showcases itself as the "safest destination", woos investors

Kerala Finance Minister Thomas Isaac had initially hinted at the idea. During a visit to the village in Alappuzha, he had casually mentioned the idea as a solution to “break the chain” during a meeting.

To enforce physical distancing, Thaneermukkom GP in Alappuzha, mandates that everyone hold umbrella when they go out of houses. Two opened umbrellas, not touching each other, will ensure minimum distance of one meter from one another. Umbrellas distributed at subsidized rate. pic.twitter.com/6qir4KXPSL

The local civic body will be distributing at least 10,000 umbrellas to the residents at a subsidised rate. Accredited Social Health Activists (ASHA) workers and Anganwadi workers will also be receiving free umbrellas.

"Two open umbrellas that are not touching each other will ensure a minimum distance of one metre. This is why an umbrella is an effective tool for social distancing. Right now, we have in stock three-fold ones – normal and extra-large umbrellas. We are trying to sell the extra-large umbrellas, as it will create more distance between users," Panchayat President PS Jyothis told The News Minute.

Alappuzha has had about five positive cases in the district so far, all of whom have recovered. Kerala has had about 500 cases, with about five deaths to date, but no new cases have emerged in the last few days.