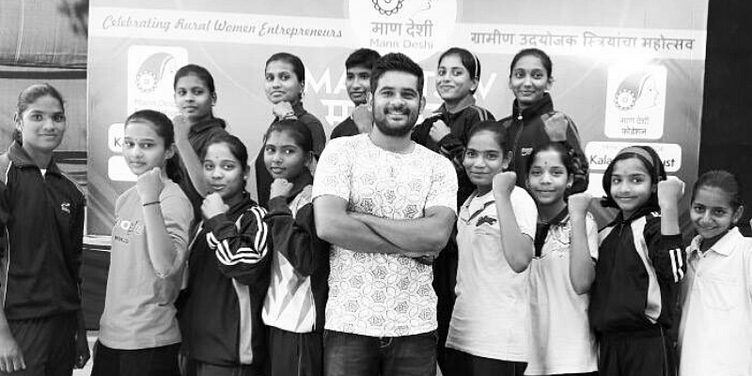 Prabhat Sinha, 31, has trained more than 7,000 young boys and girls across rural Maharashtra in various sports through the Mann Deshi Champions programme.

Reshma Kevate’s day used to start as soon as the first rays of the sun peeked over the horizon. She would quickly freshen up and take the family’s buffaloes out to graze. Spending time amidst the glorious expanse of meadows strewn with rosy pink flowers and golden yellow shrubs had become a part of her routine.

But, today, instead of chasing cattle in the village of Mhaswad, the 22-year-old runs marathons. This was made possible by the Mann Deshi Champions programme.

“I never imagined that my life would take such a turn. When I first got to know about Mann Deshi in 2010, I was keen on joining mainly for the nutritious food they offered. But, as time passed by, I started developing an innate passion for sports. The training that they provided as part of the initiative enabled me to realise my true potential and win many medals,” Reshma Kevate tells SocialStory.

In the last two years, Reshma has participated and won many runs, including, the Pune International Marathon as well as Satara Hill Half Marathon in Maharashtra and the coveted Virginia State USA Championship Invitational (cross-country).

Reshma is not the only one to have benefitted from Mann Deshi. The programme has trained and empowered more than 7,000 rural children across Maharashtra so far. Founded by Prabhat Sinha, the initiative focusses on creating opportunities for young boys and girls to play sports free of cost.

“Hailing from Mhaswad, a quaint village in Satara district of Maharashtra, I did not know about the existence of any competitive physical activities or games untill I moved to the US. Years later, when I happened to visit my hometown, I realised that things were still the same – kids had no exposure to sports, physical training was amiss in most schools and children were running around in craggy open spaces. That was when I decided to bring about a change in the scenario and launched the Mann Deshi Champions,” says Prabhat Sinha, Founder, Mann Deshi Champions.

Prabhat spent most of his childhood around nomadic tribes in the remote village of Mhaswad. While his father was a farmer, his mother was engaged in empowering women in the locality by teaching them entrepreneurial and vocational skills.

A high-spirited lad that he was, Prabhat attended classes in a small Marathi-medium school all morning and then made his way to work in the agricultural fields during dusk. Unlike many urban children, Prabhat’s growing up years were characterised by climbing trees, reveling in mud piles, jumping puddles of rain water and swimming in nearby lakes. However, he had no idea that these activities formed the basis for sports.

When his mother, Chetna Gala Sinha, got selected for the Maurice R. Greenberg World Fellows Program in Yale University, Connecticut, Prabhat too accompanied her to the United States. And, that was when he became aware of sporting events and competitions.

“My life took a spin when I relocated. From being rooted in a remote place where the language of the land was Marathi to getting introduced to a native English-speaking country with several opportunities to showcase talent, the transition was big. After I enrolled at Worthington Hooker to pursue high school, I began participating in basketball and long-distance swimming. The kind of confidence and positivity that I gained from it was inexplicable, so much so that I built a career out of it,” explains Prabhat.

Though Prabhat initially took up a degree in science followed by an MA in Economics from Fergusson College, he went on to complete a course in Sports Management from Georgetown University. The 31-year-old is known to have organised many baseball camps, managed sponsorships for athletic events and also conducted sports conferences as part of his work.

In the year 2012, Prabhat decided to visit his hometown with the intention of increasing people’s awareness about sports and its benefits. So, he established the Mann Deshi Champions programme and began by converting his farmland into mud tracks with a view to encourage children to play on them.

After three years, he expedited his efforts in this direction.

“While I was travelling across rural Maharashta, I witnessed a little tribal girl named Nakusa playing on a barren field. The 13-year-old was playing with a ball made from scraps of cloth. The vigour and joy in her eyes was contagious. When I spoke to her, I found out that she was engaged in cutting sugarcane to earn money. At that point, I truly realised the lack of sporting opportunities in rural India and wanted to expand the programme,” recalls Prabhat.

In 2017, Prabhat quit his job in the US and dedicated all his efforts to further transform the track into a full-fledged sporting academy with a large swimming pool, a 400-metre racetrack, separate fields for football and volleyball, a wrestling akhada, long jump pit as well as a 5,000 sq ft gym.

Using arts, sports and education, this organisation is building a better tomorrow for underprivileged kids

Today, the Mann Deshi Champions programme identifies young girls and boys from some of the most remote and backward rural areas of Maharashtra and offers them free training in any sport of their choice.

“We have a pool of experienced trainers and volunteers dedicated for different sports in charge of coaching the children at the academy. The session starts at 5 am every day and goes on for four hours. That is not all. We provide the kids with all the equipment needed to play the particular sport - including shoes and other gear. Pick up and drop facilities as well as a wholesome breakfast platter with eggs, bananas, and jaggery is also a part of the initiative,” says Prabhat.

Besides training 7,000 children at the academy, out of whom 50 got a chance to participate at national level competitions, the programme is reaching out to over 60 government schools and four colleges across Satara, Sangli and Solapur districts of Maharashtra to coach students in sports.

Well, even the coronavirus lockdown has not put a stop to the programme. The volunteers of Mann Deshi have been delivering protein-rich food kits to athletes and also organising zoom calls for them to interact with their favourite Olympians and sports personalities like Rehan Ponch, Aparna Popat and Tyrone Nesby.

“Physical activity is extremely significant to everyone’s life, especially when it comes to children and adolescents. It gives them confidence and helps them develop strength, stamina and mental health. Kids in rural and tribal areas have been missing out on sports due to lack of facilities, awareness, and opportunities. Now, my goal is to ensure no child misses out,” says Prabhat.

The Mann Deshi Champions programme is funded by several renowned athletes and corporates across the country and beyond - Funders corporate, Indusind Bank and RYTHM Foundation to name a few. As Prabhat is constantly looking for ways to reach out to more and more children, he is in talks with the state government of Maharashtra to draft policy guidelines on conducting sports sessions in government schools.