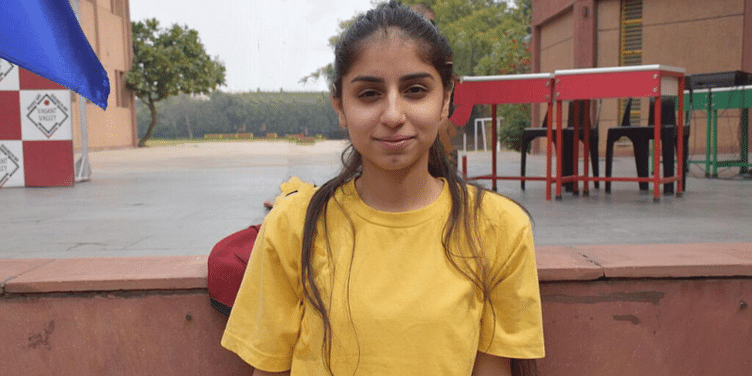 With an objective to help underprivileged women earn a consistent source of income, 16-year-old Anahit Bindra has kicked off an initiative in her neighbourhood known as ‘Sew the Divide’.

A major fallout of the COVID-19 pandemic and the lockdown has been the loss of jobs and livelihoods. According to the Centre for Monitoring Indian Economy (CMIE), India’s unemployment rate stood at 27.11 per cent for the week ended May 3, up from under seven percent in mid-March.

Not only has this led to financial insecurity amongst daily wage and migrant workers, but also prolonged destitution of people living below the poverty line.

With an objective to help some of these individuals, 16-year-old Anahit Bindra has launched an initiative in her neighbourhood. Known as ‘Sew the Divide’, it is focused on enabling women to earn a livelihood by stitching clothes, masks, and other accessories.

“I started out in December 2019. At first, I gathered 12 women from the Khayala slum in Delhi and trained them in sewing as well as designing and fabric management with the help of my aunt. Soon after, I made arrangements to procure all the resources needed for them - sewing machines and surplus fabric from warehouses,” Anahit tells SocialStory.

Today, all of them are earning an income by producing kurtas and masks.

Sushmita Soreng is one such woman. Earlier, her family used to live hand to mouth with the sole earnings of her father who was a driver. But now, she too contributes to all the household expenses.

"I was unemployed for a really long time. Well, it feels great to be independent now. Not only has the initiative given me financial freedom, but also a lot of decision-making power. Anahit and her team provided me with all the necessary skills through which I could achieve this," she says.

Reaching out to needy

Anahit, who studies at Vasant Valley High School in Delhi, used to pass by the slum in Khayala on her way to the school every day. She was moved by their plight and sub-human existence.

That was when she decided to do something to make their lives better. Anahit realised that the root cause for their deprivation was lack of employment opportunities.

“Since my aunt was running a garment factory in the city, I took her help to plan the initiative and also in conducting sewing workshops for some of the women,” adds Anahit.

The next big challenge for Anahit was to buy sewing machines and other basic equipment. While she managed to get some funds from her parents, the 16-year-old has raised a crowdfunding campaign on Milaap.

Anahit has already raised Rs 1.3 lakh through this.

"Given the widespread poverty and unemployment during the COVID-19 pandemic, we really need your help to alleviate the needy from their poverty-stricken state," the pitch read.

In the last six months, the women stitched more than 24 masks and 45 kurtas. All of these were sold and distributed to the poor through some NGOs with whom Anahit has collaborated – Close Box Foundation, Goonj, Pahel, and Dream Girl Foundation. The women earn Rs 250 for each kurta made and Rs 75 for every mask.

“I want to continue my endeavour in supporting these women and many more in future. I also want to work on building a strong supply chain for their products. It gives me an inexplicable sense of satisfaction in creating an impact for the community around me, leading the way for them to be gainfully employed, and thereby attaining self-reliance,” says Anahit.

'Ponniyin Selvan', a literary classic set in the 10th century, brought to life by Nila Comics

Worth just Rs 250, the ‘anti-suicide’ ceiling fan is winning hearts in Kota hostels