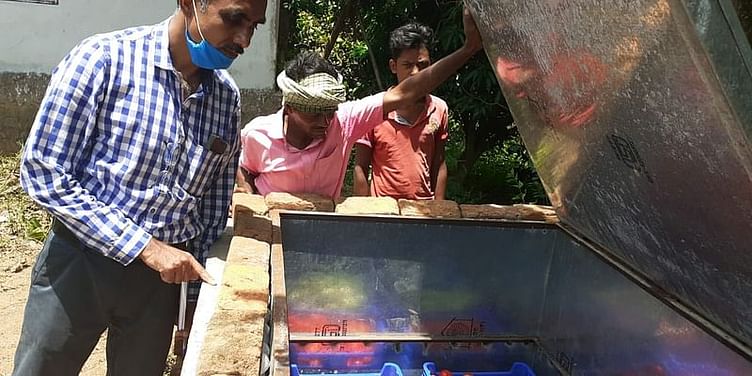 The sudden announcement of the lockdown due to the coronavirus pandemic left many farmers in a tight spot. With rabi crops soon to be harvested, many farmers found it difficult to hire labour for the arduous task.

The farming community was one of the worst hit during the lockdown, with issues like severe disruptions in the supply chain of farm produce, and closing down of the local mandis, markets, and transport facilities.

At a time like this, Thane-based RuKart Technologies came up with a solution to help farmers keep their produce fresh for longer — ‘Subjee Cooler.’

The Subjee Cooler is an affordable, no-maintenance vegetable cooler that provides a lifeline to marginal farmers by increasing their profits. With this, farmers can harvest their produce when they want to, and store it for a few days to get a better price.

It raised seed funding from its alma mater, CTARA – IIT Bombay, where professor across the departments like CTARA (Centre for Technology Alternatives for Rural Areas), CSE (Computer Science and Engineering), and SJMSOM (Shailesh J. Mehta School of Management) are actively guiding the startup’s efforts.

“We used to visit villages as a part of our course. We realised that the farmers weren’t earning all that much from the sales of their produce, and we wanted to find a solution to that problem,” says Vikash Jha, Co-founder of RuKart

According to a survey conducted by NSSO in the year 2012-13, three in four farmers in India operate marginal landholdings – less than one hectare of land. With limited storage capacity for produce from their small plots of land, these farmers are susceptible to distress sales, as well as getting a poor price for their produce.

According to Vikash, Subjee Cooler works on the principle of evaporative cooling and does not require any utilities. However, it needs watering at least once a day. This on-farm structure, built to work as a mud pot, does not require any additional investment in power utility. Based on the farmer’s requirement, Subjee Cooler comes in various sizes.

“Adopters of the Subjee Cooler are getting about 30 percent higher price for their goods, compared to other farmers,” Vikash says, adding, “Earlier, a farmer used to harvest vegetable only once in a week, the day before the weekly market, because s/he did not have any storage facilities.”

With the Subjee Cooler, a farmer can harvest vegetables thrice a week. Since the vegetables get to mature properly inside the chamber, it also reduces losses incurred due to over-maturity of crops. Farmers also have the choice to store unsold vegetables for the next weekly market.

Through its field surveys and research in Jharsuguda and Gajapati districts in Odisha, RuKart Technologies found out that farmers who use Subjee Coolers can store and sell their vegetable produce at Rs 10 per kilogram more than those who don’t have any provision to store their vegetables.

“We also found that many farmers were under-utilising this facility as they do not farm in significant quantities. And, we are encouraging them to use this,” says Vikash.

Interestingly, the field surveys also showed that many farmers find the on-farm structure quite attractive. RuKart Technologies installed the first 75 Subjee Coolers units in states such as Odisha, Bihar, and Maharashtra.

And, amid the COVID-19 lockdown, the product gained more visibility as the farmers could store their unsold produce for that time being and then sell it at a good price. At present, it has over 150 Subjee Coolers in the pipeline.

Currently, the year-old startup caters to farmers in states such as Maharashtra, Madhya Pradesh, Odisha, Chhattisgarh, and the Northeast region of India. While the startup did not disclose the price of the product, farmers can avail Subjee Cooler at a lower price, and also having the option of paying in instalments.

Talking about the startup’s future plans, Vikash says, “In the next year, we plan to cover 35-40 districts in at least seven to eight states. We also plan to initiate a service for women at the Women Technology Centre, to help them install a Subjee Cooler by themselves.”

In Central India, tribals are tapping technology and innovating to become lakhpati farmers

These sisters launch eco-friendly measures through their fashion jewellery brand