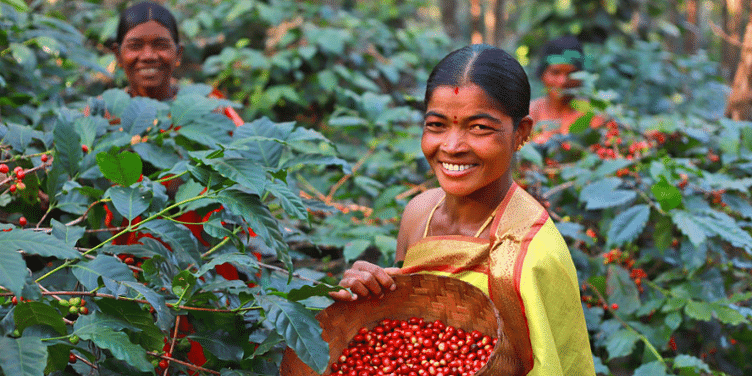 Founded in 1998, Naandi Foundation is enabling farmers in Andhra Pradesh’s Araku valley to climb out of poverty through sustainable, community-centric coffee cultivation and production model.

An invigorating patchwork of green on one side and gently undulating slopes with delightfully clear streams on the other, the Araku valley located in the Eastern Ghats, about a 110 km away from Vishakhapatnam, is an abode of scenic beauty. Popularly known as the Ooty of Andhra Pradesh, this quaint place has been home to many indigenous communities and tribes since time immemorial.

However, most of the people living there had been struggling to access even basic facilities such as nutritious food, healthcare, education, safe drinking water, and adequate sanitation. According to the 2011 Census, the average literacy rate of the population in the valley was 53.45 percent, as compared to the national mean of 74 percent. Maternal mortality rate stood at a dismal 400 per 1,00,000 live births, and a staggering 60 percent of the households obtained water from unsafe sources like springs and surface run-offs.

That was when Hyderabad-based non-governmental organisation Naandi Foundation stepped in.

“When we first visited Araku in 2000, we realised that the region was isolated from the state’s growth and development. A long-term solution was needed to improve the lives of the people in the valley,” Vikash Abraham, Core Team Member, Naandi Foundation tells SocialStory.

Founded in 1998 by Manoj Kumar, who quit his career in banking to enter the social sector, Naandi Foundation is enabling farmers in Araku climb out of poverty by providing end-to-end support – right from the seed to the cup. Whether by preparing the soil, sowing the seeds, watering them, harvesting the cherries, processing the beans, or marketing the final output, the organisation provides expertise as well as the right resources.

The NGO started by implementing projects to address specific issues like malnourishment among children and high dropout rates of girls from schools. But later, it went on to work towards enhancing the livelihood of thousands of adivasis through sustainable, community-centric coffee cultivation and production model, which eventually came to be known as Arakunomics.

After understanding the social and economic tribulations faced by the tribal population in Araku valley, Naandi Foundation started building schools and instituting youth skilling programmes in the area. Though the population was exposed to better education and employment opportunities, the progress was gradual.

“After considerable research and social interactions with the locals, we decided to set up a model that can benefit the tribal cultivators with better income as well as nutrition, and at the same time add value to customers at large – all of these while continuing to promote environmental prosperity,” Vikash adds.

Hence, the NGO launched another sustainable model – widely recognised as Arakunomics – by roping in the farming community. Since over 78 percent of the valley’s working populace was engaged in agricultural activities, especially the cultivation of coffee, Naandi Foundation saw a huge potential to bring about a transformation in the space.

Talking about the design of the initiative, Vikash says,

“We built Arakunomics in such a way that it’s a win-win scenario for the producer, the consumer and also the mother nature as a whole. In other words, it complies with the PQR formula – profitability for farmers, quality for consumers, and regenerative capacities for the environment.”

The team at Naandi Foundation also set up a processing unit with state-of-the-art machinery so that once the red berries of the coffee plant are harvested, the farmers need not worry about trading or selling them through middlemen in the market.

“The NGO representatives organise transportation facilities to collect the harvest from the adivasi cultivators for further handling. The coffee berries are then sorted, dried, cured and roasted, and packed at the facility by the local youth to sell the final output at the earliest. To maintain the quality of the coffee, we have partnered with multiple experts who supervise and guide the farmers and workers,” explains Vikash.

The resultant coffee powder–which is branded as Araku Coffee–has been rated 88-90 out of 100 by Specialty Coffee Association, a worldwide body that represents coffee professionals from producers to baristas. This enabled Naandi Foundation to sell to coffee lovers and connoisseurs not just in India, but across the globe.

The NGO received most of the financial support from Global Livelihoods Fund, an innovative carbon offset corpus. The consortium of private companies agreed to offer grant support to the adivasi communities for the cultivation of coffee, cash crops and trees on a per-acre basis.

Naandi Foundation has established Araku coffee as a brand in itself, and has paved the way for people to taste the slightly fruity, yet balanced brew across the world. The plantation, consisting of more than 25 million trees, resulted in the farmers earning approximately Rs 3.5 lakh per annum.

Today, Araku coffee is exported to many countries and also has an outlet in Paris. The NGO recently opened up the online sale of the coffee and is planning to open cafes in cities like Bengaluru and Mumbai to attract millennials.

“The credit for this goes to the adivasi farmers as well as Arakunomics – a model that brought together 25,000 people from across 720 villages and made a positive difference to one lakh tribals in the valley,” quips Vikash.

The impact on adivasi farmers

Boi Ravi Kumar, a Kondadora adivasi coffee farmer, breathed his last in February 2012 and left behind a partly-constructed house, a distressed wife and six young children. His eldest son who was studying in college, dropped out to help his mother Sundaramma in the field and make some bucks.

But they continued to struggle to run the household until she signed up to be a part of the cooperative established by Naandi Foundation. From earning just Rs 1,410 a year, the mother-son duo began getting more than Rs 86,000 in a matter of a few years.

With this, they resumed the construction of their home, got life insurance for the family and also are now saving up to buy a pair of gold earrings for the first time.

Theirs is one of the many such lives that have undergone a drastic change ever since Naandi Foundation stepped in. The success of Naandi’s initiative was recently acknowledged by Rockefeller Foundation and the NGO was chosen as one of the top ten visionaries in the world for the Food Vision 2050 Prize with an award of Rs 1.5 crore.

Manoj Kumar, along with his team, is now engaged in organising similar projects in the Wardha and Vidarbha regions of Maharashtra, as well as in Delhi.

11 incubators that are shaping social entrepreneurs into powerful changemakers