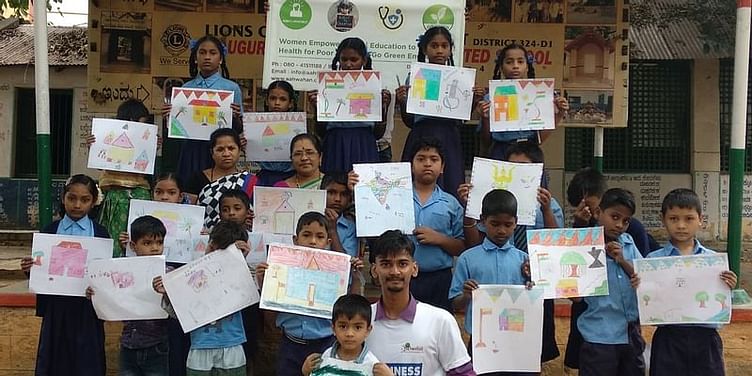 Bengaluru-based NGO Aahwahan Foundation is striving to make the world a better place for all sections of the society through its various developmental projects.

The Indian demographics are quite fragmented when it comes to the urban-rural divide. While the metros and cities are booming with the advancement in technology, infrastructure, real estate, healthcare, education, and more, the rural region is drastically falling behind. This, in turn, has led to the rise of unemployment in these regions.

Further, the COVID-19 pandemic showed the increased divide when jobless migrant workers started making their way home on foot with no food, water, or shelter. Like many NGOs and Samaritans, Bengaluru-based Aahwahan Foundation also did its bit to help the needy populace.

Founded in 2009, Aahwahan Foundation is a non-government organisation that promotes the welfare of the economically weaker sections (EWS) of the society. The NGO works towards the eradication of poverty, while also focussing on maintaining a sustainable environment.

“At Aahwahan, we have been working to understand how we can improve our society and how we can tackle the issues of poverty,” Braja Kishore Pradhan, Founder of Aahwahan Foundation tells SocialStory.

An XLRI alum, Braja is an Indian businessman and social entrepreneur. He was inspired by his father to start Aahwahan that works closely with corporates to create an equal world for everyone.

The Bengaluru-based NGO delves in the verticals of education, health, women empowerment, and community living. It also conducts activities like beach cleaning, plantation, and blanket donation drives. However, the NGO focusses mainly on its education, healthcare, and environmental initiatives.

At present, it is providing free education to about 37 kids till Class 10. In fact, instead of opening educational institutions, the NGO has adopted 78 government schools across India to develop their infrastructure.

“We also have a Computer Institute on Wheels, where a team of volunteers with expertise in computer technology go to the villages and take free hourly sessions on computer classes for girls. This programme is certified by NIIT which helps the kids get a professional degree,” Braja adds.

During the pandemic, it collaborated with about 78 government schools to conduct online classes for the students.

As part of Aahwahan’s Go Green campaign, it has conducted numerous plantation drives across India and has planted over 1.5 million plants. The team of volunteers at the NGO strongly believe in their motto, “We the people, for the planet.”

It has also conducted several beach cleaning programmes in seven beaches – Marina Beach in Chennai, Juhu beach in Mumbai, Gokarna, Puri beach, Talasari beach, and Chandipur beach in Odisha, and Digha beach in West Bengal. It has placed about 100 dustbins around these beaches with one allotted area for timely waste collection. Additionally, it is working towards cleaning and restoring eight water bodies in Odisha and Karnataka in a very unique way.

“We worked with the authorities to restore the lakes and ponds in different locations but also converted the surrounding land into community spaces like parks, jogging tracks, yoga classes, gardens, and others. This kind of development can help a village improve their community life, and also provide a source of employment to those who maintain it,” Braja explains.

Once the lockdown was announced, Aahwahan’s volunteers were quick on their feet to help the distressed. The NGO distributed over two lakh meals and ration kits to the daily wagers, senior citizens, differently-abled, and single-parents families in Karnataka, Maharashtra, Uttar Pradesh, Delhi, Bihar, Assam and West Bengal. It also helped the stray animals obtain food during the lockdown.

Its efforts also garnered support from the CSR initiatives of Cognizant, Finastra, Infinera, Citrix, United Biscuits, Euromonitor, and others. The NGO conducted several awareness campaigns on maintaining the necessary hygiene etiquettes during the pandemic in the slums of Bengaluru, and through its COVID-19 programme, it distributed about 10,000 personal protective equipment (PPE) kits. It provided medicines in the containment zones as well.

While Aahwahan had undertaken this massive responsibility during the pandemic, it still had to overcome the transportation and logistics challenges. Mansi Pradhan, the COVID Programme Manager for South India, Aahwahan Foundation, says, "It was a challenge to keep up with our regular ongoing projects which had to be paused for a while. We also needed to find quick solutions to the problems before us, like jobs for migrant labours, their journey back home, as well as ongoing education for the government school students.”

With mental health concerns rising amidst the pandemic, the NGO launched a helpline as part of its programme to curb this. According to the founder, it received about 27,000 calls in a month for the same.

In fact, it offered doorstep medical assistance, along with maternity help to people who couldn’t visit hospitals. With the help of the ASHA workers, the NGO assisted 33 women with childbirth. Additionally, the Health on Wheels also conducts COVID-19 tests and refers the positive cases to public health officials.

Aahwahan has also received several accolades from K Sivan, Chairman of ISRO, who appreciates their tireless efforts. On one occasion, Sivan said, "I laud the noble services selflessly being performed by the organisation towards the society. Helping the poor and ones in need of basic amenities will go a long way in helping the society at large."

At the height of the lockdown, with no job or shelter, the migrant workers were left to fend for themselves. The NGO arranged three flights — each from Mumbai, Delhi, and Bengaluru — to help them return to their hometowns. It also arranged 14 buses, as well as train tickets for 3,700 people to return home.

Aahwahan partnered with FMCG companies, intending to provide these displaced workers with employment. These labourers were involved in small tasks like chocolate packaging, courier packaging, and other tasks, which they could do remotely as well. In fact, it also trains farmers, wagers and sex workers to upskill and find a livelihood for themselves.

Along with the pandemic, the eastern states of Odisha and West Bengal also suffered from the cyclone Amphan, which hurt the rehabilitation of migrant workers in the states. Braja says that rehabilitation became quite a task as most people did not adhere to the government protocols.

“We found government buildings like schools and others to provide them with temporary shelter, food, medicines, masks, basic necessities like blankets, and others to the ones affected by the cyclone,” says Prashant Barik, Northeast Head for Aahwahan Foundation.

With Aahwahan, Braja Kishore plans to continue the efforts in the different verticals, reaching out to more people in need. “We believe that the earth is one community, and its people should support her sustainability. That is our ultimate aim with Aahwahan,” he concludes.