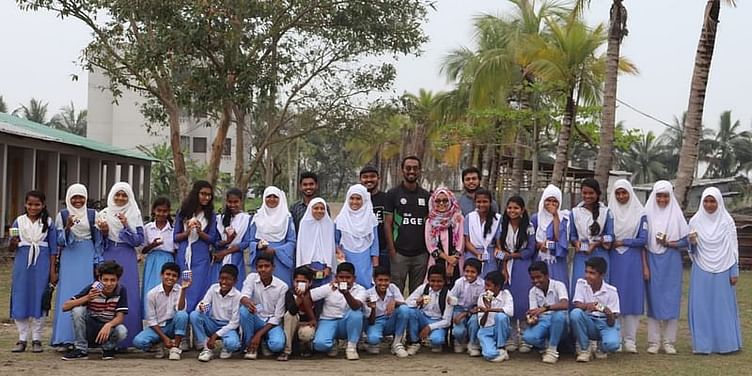 This non-profit organisation is run by young volunteers, who want to ensure every teenager in the country gets the opportunity to succeed.

Yusuf Munna discovered a passion for writing while he was still in school. His father, a Dhaka-based doctor who shared his son’s interest in writing, encouraged the boy to follow his passion and submit his work to newspapers and magazines for publishing.

“Everyone I approached rejected my work and I was feeling very demotivated,” says 21-year old Yusuf. He was only in fourth grade at the time.

Things took a turn for the better when a senior from school introduced Yusuf to a writer at a newspaper, which had rejected his writing. The writer expressed an interest in Yusuf’s work and was sent a story that had previously been submitted to the paper. When the story was published, a pleasantly surprised Yusuf realised how important it was to have the right connections to get ahead in life.

Other aspiring writers in his circle shared similar stories. The teenagers then decided to start a web magazine that would serve as a publishing platform and offer others like them more visibility.

“It was 2010 and I was still not sure about how web publishing worked,” says Yusuf. “So I taught myself WordPress on YouTube at a local cybercafe and spent my allowance and the money from a scholarship I had won to buy a domain name.”

The Reflective Teens (RT) web magazine went live in 2013 and was soon inundated with submissions from students, who were sending in their writing, artwork, and photography. Students from outside Bangladesh were also engaging with the web magazine. With the increasing popularity, Yusuf realised RT had become like any other mainstream magazine, which defeated the purpose he wanted to achieve.

Yusuf and the RT team decided to diversify from publishing and designed a programme for school students called RT Talks.

“We invited writers, filmmakers, and photographers so that we could learn from them directly. The success of that initiative inspired us to start a host of other programmes as well,” he says.

rt Brainery: A programme for children from marginalised communities. This four-week virtual after-school programme teaches children problem-solving skills to keep them engaged in academics and prepare them for real-world challenges.

rt Creator’s Convergence: A day-long event where directors, photographers, and other creative artists talk about their life, creative works, and answer participants’ questions.

Eight years after inception, RT has several volunteers in the age group of 19-21, who manage the three programmes and reach out to schools to onboard them to these initiatives. As a non-profit, its trainings are free of cost and the volunteers do not accept any remuneration.

“We have multiple sources for donations to run the programmes,” says Yusuf. “Our board members work with companies like ﻿Apple﻿and ﻿Google﻿, the Australian Federal Government, the British Council, and the University of Dhaka. They guide us about fundraising and also help us connect to networks from where we can raise funds.”

He adds that the organisation has also applied for various grants.

“Reflective Teens approached me to become the Chair when I was in a transitional place,” says Eeshita Azad, who serves as the non-executive Chair. “I have lived and worked in three continents, and after 10 years in Bangladesh, I was relocating to the UK. I wanted my ties to my country of birth to remain strong. Accepting the offer by Reflective Teens was my way of tying the knot in the most meaningful way: by supporting the creative young people of my country. I believed in their vision and felt strongly about their plight. I wanted to help RT grow and reach new heights.”

Powering through the pandemic

However, the COVID-19 lockdown saw the RT team move its programmes online.

“We have reformed our activities and tried to make them as impactful as possible,” says Yusuf. “The only problem is we are not able to fully reach teenagers in marginalised areas. That was our initial vision and continues to be our main purpose. As soon as the situation improves, our team will be deployed in the field and they will start doing their regular work.”

“I am very proud of what Reflective Teens was able to achieve in this unprecedented year of a global pandemic,” says Eishita. “We have an amazing set of people as board members to advise RT. And we have a fresh batch of young people joining the executive team and the implementing team (campus ambassadors). I feel very hopeful that the vision of RT to nurture the creative teens of the future will continue to flourish in the new year.”

On the future, Yusuf says: “When we started in 2013, there was no other organisation, which was dedicated to working for teenagers. In Bangladesh, it was either a child or a young adult or youth, there was no word for teens. On our Facebook page, you will see that the word is all capitalised. We want to say it out loud so that others can hear us, or at least start thinking about teenagers.”

He says Reflective Teens is his life’s calling and that he would want to make the project sustainable.

“Most people think that non-profits should not make any money or don’t need it,” he says. “They need money for the expansion of activities. We would also like to focus on a sustainable financial system for our organisation. We are planning to start a centre where teenagers can come, find like-minded people, incubate their ideas, and find work. We would also like to expand our activities horizontally, so that we reach every teenager, even from the remote corners of Bangladesh.”

Celebrating love? Here’s how you can keep it more thoughtful this Valentine’s Day