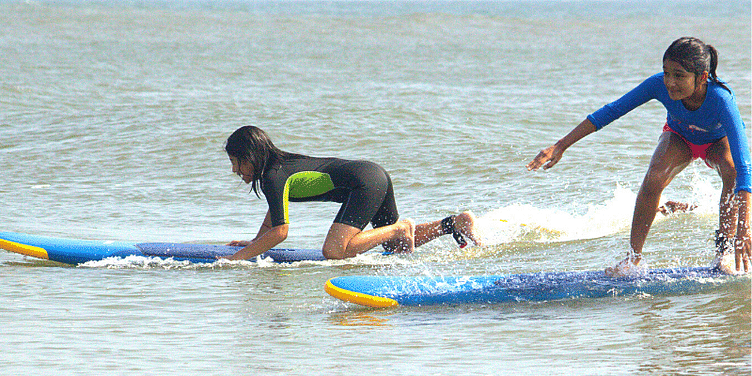 Bay of Life Surf School in Chennai not only teaches surfing and other sports, but also cleans and maintains the Kovalam beach and the water bodies.

In 2009, after the closure of his startup Yo Potato, an online food delivery platform that Showkath Jamal calls ‘Swiggy before Android’, he felt that he needed to do more in terms of ensuring sustainability.

For a long time, he felt inclined towards escaping to the vastness of the ocean, a place where he could swim away from all the worldly problems. He especially found happiness at Chennai’s Kovalam beach, a place close to his heart.

“I have been swimming at Kovalam for so many years now, and I wanted to do my part for the beach and keep it clean,” Showkath tells SocialStory.

While doing an internship at Kalinga Centre for Rainforest Ecology (KCRE), a research centre, he became interested in conservation and wanted to find a reserve to put his efforts into action. While Chennai didn’t have too many forest reserves, he only had to look at the ocean to find a big reserve with extensive marine biodiversity.

He wanted to encourage sustainable sports and ensure that other human activities did not harm the ocean. So, he started Bay of Life Surf School and Ocean Literacy in 2011. While activities like cleaning beaches and saving marine life including turtles have now become popular, Showkath and his team have been doing it for over a decade.

A school for fun learning

Located at the Kovalam beach, Chennai, Bay of Life Surf School aims to generate interest towards sustainable ocean sports and activities at a time when surfing had started to pick up thanks to pro surfers from abroad.

The school offers various activities including surfing, paddling, ocean kayaking, swimming, windsurfing, kite surfing, and other activities which don’t use motorboats. “This way, the fishermen won’t be bothered and the fishes won’t be impacted,” says Showkath.

The team include locals from the nearby village who have already been introduced to surfing and are good swimmers, and those who intend to become surfers and instructors. They are trained with the support of staff hired from the US. The team members are trained in surfing as well as marine biology so that they take up the role accordingly.

“We wanted to get things right because of the scepticism around this new sport. So, we had to ensure the safety, and get experts to instruct the interested folks,” Showkath shares.

He adds that the aim of the school was to get the locals interested and help them shed the fear of the ocean. Showkath says he also wanted them to learn how to embrace the ocean beyond the beach. More than 8,000 people have been trained by the school, so far.

In terms of expansion, the team wants to first reach metro cities, including areas around Mumbai, and then expand to Tier-II cities.

Apart from ocean sports, they also offer other activities including team outings for corporates which include various ocean sports, and the marine educational programme called ‘Campus Kovalam’, where they teach students about the ocean.

Campus Kovalam is a marine field trip programme that is associated with schools to hold classes for students on subjects varying from topography, ecosystem, taxonomy, and others. While these classes are free for government schools, private schools pay for these classes.

The classes have two parts – a half-a-kilometre walk along the beach, and a visit to field stations like CMFRI (Central Marine Fisheries Research Institute) and CIBA (Central Institute of Brackishwater Aquaculture).

“Here, we meet government officials who can make the children understand that they can also make a career out of marine science,” says Showkath.

Showkath explains with an example, “A lesson on tides will be a live experience of the actual rise and fall of tides. The children can also study various marine samples found along the beach.”

Bay of Life also teaches them how to release the bycatch, which are marine species like hermit crabs, octopus, and others that get accidentally caught in the fishermen’s nets. The students study about these species and release them back into the ocean. So far, they have reached about 12,000 children through this marine school.

While the school comprises a major part of the organisation, it also carries out marine social causes including beach and ocean clean-ups through the Bay of Life Foundation.

At the foundation, some of the major activities include beach trash analysis, beach cleanup, and free surf lessons for people who clean up five kilos of trash from the beach.

While they team up with the East Wing coast guards for an annual cleanup, the team also takes part in restoring the oceans.

“No matter how many times you clean the beach, unless you rid the ocean of some waste, they will wash ashore every time,” says Showkath.

To prevent this, they are in talks with a government oil agency whose name they don’t want to disclose to prevent floating debris from entering the sea from one of the rivers near Kovalam, called Muttukadu. The team is planning to build floating trash barriers at the estuary to collect all the floating waste that can then be regularly removed by the civic bodies.

The startup has also tied up with DIVE India, a scuba school in Andaman and Nicobar Islands, who are also interested in marine ecosystems.

“With their help, we have a dive team that can clean the ocean as well. This dive team primarily cleans up the ghost nets from the oceans that fishermen usually cut off, if caught. While they clean this up from the ocean, they also tell fishermen to be more cautious about these nets,” says Showkath.

These ghost nets severely harm species like sea turtles and snakes due. So far, the team has cleared over 24,000 kilograms of waste from the beach and the ocean.

In the first lockdown, Showkath says that they were almost broke, saying, “Most of our programmes, especially our ‘Team Outings’ programme for corporates took a big hit. Moreover, with schools closed, the marine programme also came to standstill.”

However, once the lockdown was lifted, Showkath says many people began to show interest in surfing. Post-August, they saw a huge surge in the number of requests, which temporarily made up for the other two programmes coming to a halt.

Talking about some of the other challenges, he says that establishing the surf school in 2011 was a challenge. “It was difficult to introduce ocean sports into the state and bring the locals on board. But within three years, many of them joined us on the beach, while some even joined the team.”

In the long run, Showkath wants to establish self-managed centres along the eastern and western coasts (at least five in the next five years), and further encourage sustainable ocean sports.