How Habitat for Humanity is helping India’s most underserved communities 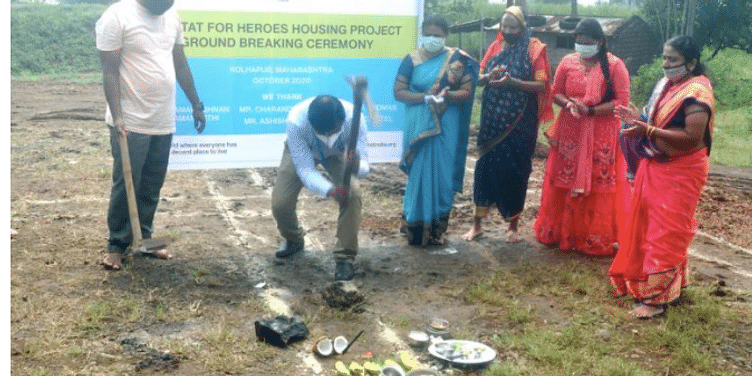 From fighting homelessness, rebuilding disaster-impacted homes, and addressing issues around open defecation, Habitat for Humanity has impacted over 13 million families during the pandemic.

According to the Census of India 2011, a houseless household is one that does not ‘live in buildings or census houses but live in the open on roadside, pavements, under flyovers and staircases or in the open in places of worship, mandaps, railway platforms, etc”.

There are said to be over four million homeless people in India. The Census also revealed that there were more than 65 million people living in India’s urban slums.

Global housing non-profit Habitat for Humanity says there are 63.67 million households across India that do not have adequate housing. The organisation has been working in India since 1983 working with with communities and groups at the bottom of the pyramid such as the Irula tribes of Tamil Nadu, families living with HIV AIDS, families of martyred soldiers and, the widows of farmers who committed suicide due to debt.

Since it was founded, Habitat India has impacted over 5,16,071 families through direct interventions and coalitions.

Speaking to Social Story, Rajan Samuel, Managing Director, Habitat for Humanity, said, “The core areas that Habitat works in are housing, WASH (Water, Sanitation and Hygiene), and disaster risk reduction and response. Millions of families in urban and rural India lack access to decent shelter or a toilet. Habitat India reaches out to these families after conducting baseline surveys in the location where the need is the most, carries out due diligence on the background of the families and works with those who need our support the most.”

Habitat India has also been active with disaster response and supporting families during the COVID-19 pandemic.  With the outbreak of COVID-19, the organisation reached out to vulnerable families affected by the lockdown.

“The entire staff of Habitat India and our partner agencies have been supporting the government to create a safety net for migrant workers, commercial sex workers, daily wage earners, people living with disability, adivasi, and other vulnerable communities,” says Rajan.

“When the government announced the nationwide lockdown in March last year, millions of families were left without access to daily sustenance or a roof over their head. We firmly believe that a home is the frontline defense against the virus as it insulates families living in poor housing conditions.

"India launched the Road to Recovery COVID-19 Response strategy which places the vulnerable families on a path to durable and permanent recovery through prevention, protection, recovery, and reconstruction. To date, Habitat India has supported 13,27,076 people during the pandemic by providing them with hygiene and family essential kits and by setting up Habitat Care Centres to shelter people in isolation,” he adds.

During the second wave of COVID-19, Habitat India is providing vulnerable people with essential and hygiene kits, and scaling up Habitat Care Centres equipped with beds and oxygen concentrators.

Working for the vulnerable

The lockdown in 2020 and the mass exodus of guest workers resulted in an extreme shortage of labour for construction.

Habitat for Humanity’s volunteer programme where professionals and organisations across India and the globe work alongside homeowners to build the homes have been paused indefinitely. The strict guidelines and a shortage in funds created by the pandemic has paused a lot of the projects that Habitat is working on.

“Funding for Habitat’s work is raised within India, thanks to the generous support of our corporate partners through the CSR policy. A large number of individuals including corporate professionals, students and volunteers contribute to Habitat’s work,” Rajan says.

He says Habitat India’s goal is to serve over 51 million people through Housing, WASH and Disaster Response initiatives. The organisation is strengthening its partnerships and coalitions with NGOs and state governments to provide adequate and permanent housing support to low-income families.

“The Department of Housing of Government of Andhra Pradesh has appointed us as the Knowledge Partner as they are implementing the flagship housing program – Navaratnalu Pedalndariki Illu (Housing for the Poor) - impacting 3 million families across the state,” says Rajan.

Habitat India is also working with other communities like the Irula tribe in Tamil Nadu – one of the country’s most marginalised communities – to build a better future through housing. The Irulas have traditionally lived in forests with no secure tenure and their diet includes rats as they have no access to mainstream food.

Habitat has helped 354 families secure land titles for the first time in their lives and 120 families are now first-generation homeowners and live in their permanent homes. An additional 70 families have secured PMAY subsidy to build a home of their own under the Pradhan Mantri Awas Yojna.

The organisation has also been working to build homes for families of martyred soldiers, visually impaired communities in Maharashtra, and families living with HIV/AIDS in Delhi.

“We have rebuilt the island village of Mundra, which was devastated in Kerala floods 2018. All 236 families living on the island are impacted by Habitat’s post-disaster work in the housing eco-system. Since this is a flood-prone area, the homes are built using auger under-reamed pile foundation and by increasing plinth height,” Rajan says.

“Every region and terrain in India has a unique feature and culture. While building a home, Habitat India takes into account the need to make the house more affordable, sustainable, and resilient. Habitat India believes in a housing design that fulfills the needs of the family, keeping the cost of construction and maintenance to a minimum,” he says.

Habitat India has also been actively working to provide the most basic infrastructure needs. The organisation’s Water Wheels project is serving millions of farmers in rural India who face water shortage, especially in summer. Women in these communities travel a minimum of 5 km to get even 10 litres of water.

Habitat India’s Water Wheels are distributed in these drought-prone villages. These cylindrical drums allow the easy transport of water from one location to another; each water wheel stores around 45 litres of water. This small change has not only reduced water shortage but also improved the physical health of the women who were burdened with carrying pots of water.

The organisation has also addressed the issue of open defecation, which poses a significant health risk  and is also a safety threat for women and girls who go to the fields even after dark to defecate.

In 2014, Habitat launched its ‘Sensitise to Sanitise’ campaign with an aim to eliminate open defecation. Today, Habitat India has built  a network of 142 partner organisations to take on the challenge of sanitation and has served over 32.5 million Indians.

Overcoming her struggles, this Indian woman in Japan dons many hats to heal the world