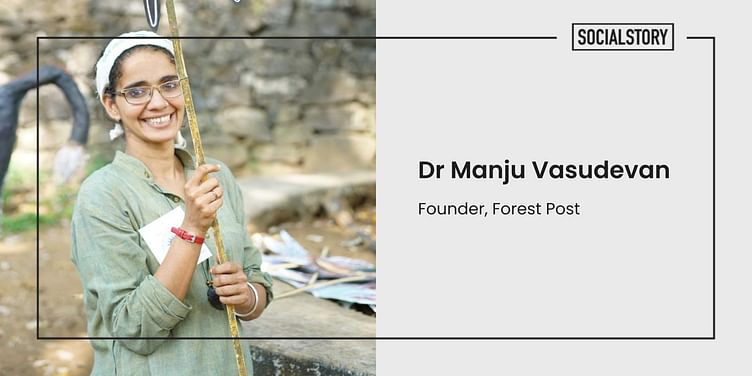 Dr Manju Vasudevan and her team started Forest Post in 2017 to create livelihood opportunities for tribal communities based on their knowledge and wisdom.

Chalakudy and Karuvannur river basins in Kerala are dotted with villages and settlements of indigenous communities, many of whom are forest-dependent.

For Dr Manju Vasudevan, an ecological researcher who constantly interacted with members of the community, there was an ongoing question of how to create livelihood opportunities based on the knowledge and wisdom of these indigenous communities.

Engaging with the Kadar, Malayar, and Muthuvar tribes, Manju and her team established ﻿Forest Post﻿ in early 2017, and it has been an uphill journey ever since.

Forest Post is a network of minor forest produce harvesters and makers of handmade goods including beeswax, oils, bamboo baskets, and cloth bags.

With a Ph.D. in Pollination Ecology, Manju also spearheads the Conservation and Livelihoods Programme at River Research Centre, Kerala. She has worked on the river rights movement along with Dr Lata Anantha, a river rights crusader.

“This livelihood programme started as an offshoot of some of the work we were doing on forest rights with World Wildlife Fund,” says Manju.

The area surrounding Vazhachal forest was among the first in South India to receive Community Forest Rights. Under this, villages can get their traditionally held forest land recognised and it gives them the right to protect, conserve, and manage the resources.

For the Adivasi communities, the procurement and sale of many non-timber forest products (NTFP) has been going on for years. But there was a significant gap when it came to making it an organised venture, which is where Manju and her team hoped to intervene.

From leaves, roots, and tree bark, to honey and resin, the Forest Development Agency of the State Forest Department buys these products from the Adivasis at fair prices.

“These harvests are seasonal and native people almost always know where to find the resources and what time of the year,” remarks Manju. They also know how much to harvest without exploiting.

“Sustainability is embedded in their native wisdom,” she adds. Securing livelihoods among Adivasi communities that live in or near forests can contribute to conservation in the long run through preserving knowledge of forest resources.

At the start of the project, they received funding from Keystone Foundation in the Nilgiris, which went on for three years.

Lata, who was fighting cancer at the time, pushed for enterprise building to make it more sustainable in the long run. Keystone provided training and taught the women how to make products using beeswax and cosmetics.

“We were also trying to document what is available in the wild [like food products] and what can be value-added,” Manju explains.

Trained in ecology, Manju would often venture into the forest with members of the community and on one of the trips, they realised that there was an abundance of Shatavari (wild asparagus) so they started making a pickle out of it.

At one of their local events, a woman came up to Manju and asked if they had any other Shatavari products other than pickle. Manju recalled that almost twenty years prior, she had been on a trek with members of the Kani tribe who often carry wild honey in case of injuries. They made her try Shatavari with honey and she loved it. This was soon made available to people and it became an instant hit.

Local events became the primary means to reaching out to more people with not just food products, but also baskets, mats, pouches, and other goods made by the tribes.

Manju reiterates that physical events are most important for them, and now that things are starting to open up again, they hope to be able to be a part of more local exhibitions and events.

“There is an upper cap we put on harvest,” Manju says. For these indigenous communities, sustainability is a way of life and the initiative respects that. But this also means that scaling up to larger quantities for bigger orders is out of the question. But she underlines that there are fair wages for women who are involved in the harvesting and value addition, and that is their key mission - to provide an opportunity for them to be more financially stable.

“Some of these food products have an extremely narrow window. For example, there is a wild grape which we can only get in the third or fourth week of May,” she explains. So it does present some challenges from a business perspective.

Last year, the United Nations Development Programme (UNDP) showed interest in the project and has been providing inputs in terms of streamlining the business processes and also facilitated the help of a management consultant and a brand strategist.

One of the collectives that Forest Post works with has also been empanelled by the Tribal Co-Operative Marketing Development Federation of India Limited (TRIFED). Manju believes that this will open doors to more opportunities as well as national festivals and events to showcase their work.

To date, Forest Post works with three communities in five villages, but hopes to expand its footprint sustainably in the coming years.