[Sustainability Agenda] This 12-year-old’s NGO has recycled over 1.5 lakh batteries to make Earth a better place 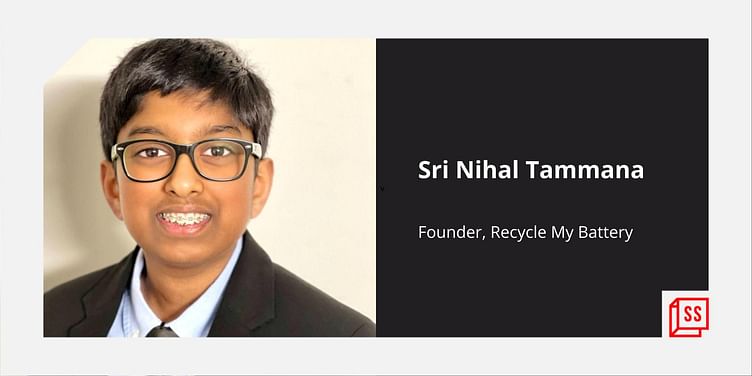 Started by Sri Nihal Tammana in 2019, US-based Recycle My Battery promotes and facilitates the recycling of used batteries through safe disposal and awareness.

Entrepreneurship knows no age, and Sri Nihal Tammana proves that right. For the past three years, 12-year-old Nihal has been working to rid the world of battery pollutants to make it safe from fires.

An Indian-American, Nihal founded ﻿Recycle My Battery﻿ in 2019. The US-based NGO aims to promote and facilitate recycling through safe disposal and educating others about the process.

To date, he and his 150+ team of young kids have recycled over 1,50,000 used batteries and educated over 1.5 million people on the importance of recycling used batteries.

“Kids are our future. So, we are onboarding as many schools as possible,” Nihal, also a TedX speaker, tells SocialStory.

Recently, Recycle My Battery tied up with the Telangana government and battery making company Aloe Ecell for its operations in India.

Nihal’s campaign started around his 10th birthday when he saw on TV how a fire at a California-based waste plant caused millions of dollars worth of damage. Upon further reading about it, he realised the evildoer was a discarded lithium-ion battery.

“I was scared and intrigued by the fact that everyone was watching the news, but no one was taking any action on this bad problem. That made me very sad for our Mother Earth; she is suffering from climate change problems we are creating,” Nihal recalls.

Upon researching the ill effects of used batteries, he found that globally, over 15 billion batteries — containing toxic chemicals — are carelessly dumped in the garbage each year. This improper disposal causes fires and pollution, putting the lives of millions of people and animals at risk.

This was the clarion call for the seventh-grader, and he started a campaign to rid the earth of used batteries and bring awareness. He started by providing battery bins to everyone to recycle used batteries properly.

Through daily updates on social media platforms and blogs, Nihal attracted other like-minded children and corporates, who came forward to collect and recycle all kinds of batteries.

“Batteries are so commonly used that a lot of people forget about recycling them and they end up in landfills,” says Nihal.

As a start, the NGO collaborated with US-based Call2Recycle, a rechargeable battery and cell phone collection organisation, to place certified battery bins in various locations in the US, including offices, schools, libraries, private and public companies, etc.

People can use these battery bins to drop their used batteries for free. Once the bins are full, they are transported to a nearby sorting facility, where they are sorted based on their types, preventing batteries to clash among themselves and causing a fire or any chemical reaction.

These sorted batteries are taken to respective recycling facilities, where they are either made into new batteries or other items.

Call2Recycle takes care of all the costs, including free two-way priority shipping of the bins, and has placed bins in about 200 locations in the US.

Besides Call2Recycle, RMB has collaborated with learning centre Best Brains, which advised the NGO on where to place the battery bins.

Additionally, Nihal and his team also go to schools and houses to educate the mass and collect batteries.

Setting up in India

At present, there are about 15+ kids working in India. According to Nihal, the NGO was on the lookout to find a company like Call2Recycle in India, so kids can go beyond awareness and make recycling batteries a habit.

RMB found out about Aloe Ecell, an aloe vera-based battery manufacturer, which decided, as part of its CSR activities, to help the NGO with providing shipping bins and recycling batteries.

Nihal says Aloe Ecell has promised to help RMB in recycling over 30,000 batteries each month, starting from March 2022.

Recently, RMB has partnered with the Telangana government, which is building a battery recycling facility plant, to spread awareness and educate school and university students on battery recycling.

Besides India, children from Canada, the UAE, and Ireland have come forward to support RMB.

With his NGO, Nihal aims to reach the day when we have zero used batteries dumped in the garbage. For this, at least a few kids should work towards this goal from each country, he says.