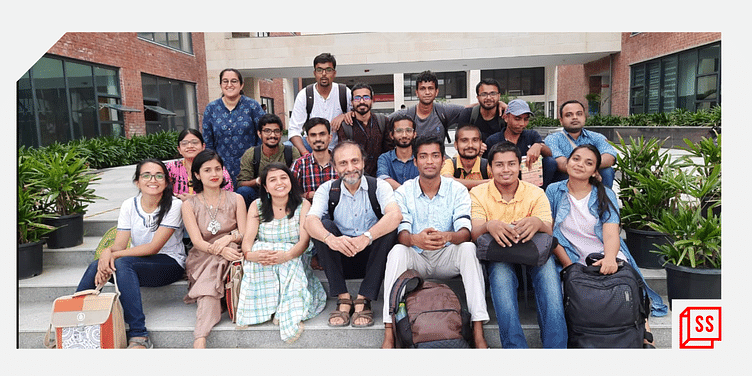 Seema Anand and Prashant Dhawan, Founders of Biomimicry India, believe that we need to break the silos of our learning, look to nature, and take an open and interdisciplinary approach to innovation.

On May 21, 1997, a book called Biomimicry: Innovation Inspired by Nature by Janine Benyus first hit bookshelves across the world. The book detailed an emerging trend that was simple as it was radical–emulate nature to innovate solutions for humans.

There were already several examples of such innovations–wind turbines inspired by whale fins, solar panels inspired by butterfly wings, and Japan’s Shinkansen inspired by the elongated beak of the kingfisher. However, while these examples existed, large scale adoption of biomimicry is still not widespread.

In simple terms, biomimicry is defined as an ‘empathetic, interconnected understanding of how life works and ultimately where we fit in’.

It was a whole new idea that would upend the unsustainable production and consumption patterns that had become the norm after the Industrial Revolution. Best of all, this new way of thinking was not just inspired by nature, but in sync with nature.

Bringing the concept of biomimicry to India are Bengaluru-based architect couple Seema Anand and Prashant Dhawan, Co-founders and Directors of Biomimicry India, an organisation that aims to promote how design can be realigned to be in sync with nature and is taking this insight to schools, universities, companies, and ordinary people across India.

“Although I started out as an architect, I always had a problem with the industrial way of working. I was doing very mundane work to keep the belly full, and I would on occasion do these extremely different assignments like documenting a monastery in Ladakh, or tribals in Odisha. These offbeat things were where I got close to a way of living that was not necessarily playing by the rules of industrial civilization,” says Prashant.

Both Seema and Prashant, trained at the Biomimicry Institute in the US, are now part of a global network that advocates the advantages of biomimicry and sustainability. Since 2014, the couple have been working with schools, colleges, and corporates, and are conducting online workshops that introduce the concepts of biomimicry and why that is the way forward to a better future.

Since then, Biomimicry India has conducted more than 190 biomimicry workshops/talks, across disciplines and age groups, and has reached more than 25,000 people. Biomimicry has been successfully taught across engineering colleges, business schools, design schools, K-12 education, and corporates. These include the Indian Institute of Technology (IIT), National Institute of Design (NID), National Institute of Fashion Technology (NIFT), Indian School of Business (ISB), etc.

However, it has not always been smooth sailing for the duo, who in the early days gave lectures to largely empty halls even when the lectures were free. The first biomimicry innovation lab that Seema set up was not in India, but China.

Prashant feels that while people do believe in the fundamental benefits of biomimicry, there is a level of scepticism that has hampered more investment from education and industry. He attributes it to the current structure of academia, which is siloed, and says biomimicry is holistic and multidisciplinary.

“In the 21st century, the ecosystem, nature of communication, and learning has evolved, and responding to that Biomimicry India has charted its own path in offering and making the Biomimicry learning available to as many people as possible by offering and growing the discipline not only as a course/workshop in colleges and schools, but also through the media/medium of public events and popular culture. That’s the big differentiation of our enterprise,” says Prashant.

“Today, we live in a system where we are constantly made to feel incomplete. So we feel,  let’s get a Harvard degree that will complete you. Go make more money. That will complete you. Quite honestly, biology tells you that's all rubbish. As long as we are looking at industrial reference points, you're always incomplete. And the interesting thing we find that our education had become our prison.”

So, when asked if biomimicry is viable in today’s world, Prashant says, “There is growing awareness and demand for environmentally sustainable products, processes, and policies. Governments are also encourage this. Industry and businesses need to understand and address the new innovation challenges not only for current sustenance but also to be future-ready.”

Seema adds that biomimicry is probably the only programme that is based on observing and learning from natural phenomena and patterns--and therefore allows learning in an integrated manner and not in a reductionist format within the 'silos' of subjects/disciplines).

One of the challenges they face is that while people speak about sustainability, it is still largely lip service. “I actually think it’s a fashion accessory, which people wear at fashionable parties or conferences. But that’s just fashion. So, you will hear everybody talking about the environment but just look at the way they are running their industry. But this is simply a design fault. We have all created a system where we're rewarding, firing or hiring people based on their economic outcomes. So no matter what they do, finally, they are trying to fit in everything in our economic system,” says Prashant.

The couple says that it also boils down to the way we treat each other. “If you really think deeply, look at how we teach our children. You're saying, ‘How do I shape him or her so that I can fit them into the economy so that he or she can fit in and nourish the economy. So the economy is our servant, and our servant has become our master,” he adds.

But Prashant and Seema remain hopeful. “It's sad that people are so myopic and unwilling to visualise an alternative. We have to understand the realities of our current system. But, we also know that we are just one knock away from the right door. You can't stop just because you've knocked on 100,000 doors,” says Seema.