Beyond disability: How this autistic, visually-impaired singer battled all odds with music 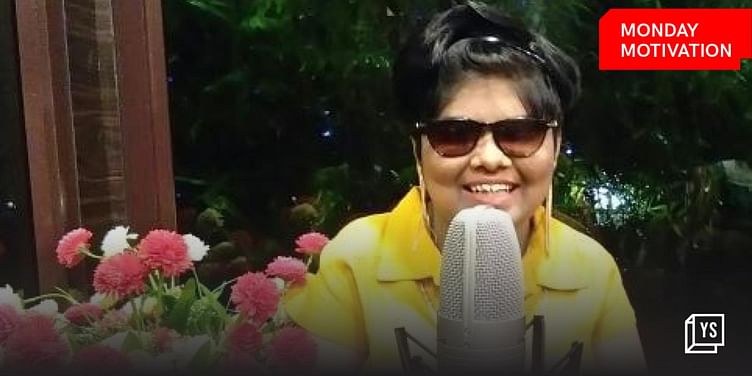 For Shibani Ghosh, music was something that helped her navigate life as an autistic and visually-impaired person. She has not just performed on many platforms, but also released her first album.

“Why fit in when you were born to stand out?”

Shibani Ghosh’s life is an embodiment of children’s author Dr Seuss’ words as she has braved challenges throughout her life—dealing with autism and visual impairment, only to shine through with her talent.

Shibani hails from Krishnanagar, a small town in West Bengal, where her father Asim Kumar Ghosh is the headmaster of a school and her mother Sujata Ghosh, worked as an accountant. Living in a conservative society, Shibani’s mother was often ill-advised by relatives and neighbours to give her child away to an orphanage due to her disabilities. Some even went to the extent of calling Shibani “useless”.

“But how could I ever? She was my daughter. So, I moved in with my mother in Kolkata for six years. My mother supported me a lot and we enrolled Shibani in a school to give her a normal childhood,” her mother tells SocialStory.

While childhood for other children was a time to play, for Shibani, it was an age of struggle as her parents had to not only endure people’s taunts, but also navigate around the lack of infrastructure for autistic children and schooling opportunities.

It was a particularly difficult time for her mother who tried to give Shibani a normal childhood by taking her out to play with other children. Every time they would go for a walk, people would stare at her child and ask insensitive questions like ‘why she is like this’ or ‘how can you raise a child like her’. But the parents didn’t give up.

“On days when we as parents felt nothing was going to be right, we often looked at Shibani and drew strength from her,” says Sujata.

Although Shibani was being treated differently, she showed courage to step out again and again. Seeing her dedication, her mother studied Braille to help with Shibani's schooling.

[Monday Motivation] Meet Gunasundari, a small-town girl from Tamil Nadu who coded her way to success

“I was three months old when I suffered from pneumonia and couldn’t sleep all night. In the morning, when my parents were taking me to the doctor, they encountered a saint who was singing. Upon hearing his voice, I stopped crying,” Shibani recalls.

This was when Shibani’s parents discovered her love for music. Even before she could speak, Shibani had begun to sing “I think music is the source that bridges the gap between the world and me,” she says.

She started singing when she was two years old. “On one of my birthdays, my parents got me a cassette as a surprise, and I would fondly sing to it,” Shibani says.

Shibani would also listen to the radio daily and sing the songs that would play on it. “We knew she was inclined towards music. We hired a music tutor, and later, she took classes at Zee TV and learnt classical music,” Sujata says.

After she started participating in music competitions, Shibani’s parents realised that she was competing against non-disabled singers, which adorned her an equal status in society. No one made fun of her or ridiculed her and people could finally see beyond her disabilities and recognise her talent.

A few years later when Shibani was in grade 5, actor-turned-MP Taposh Pal visited her school Helen Keller Smriti Vidyamandir- during an election rally and was welcomed by Shibani with a song. Impressed by her talent, he connected her to a renowned musical TV channel called ‘Dhoom’, who decided to release an album for her. The album had a unique fusion of Tagore songs with western music.

“My wishes came true when I made my debut as a professional singer by releasing the CD album ‘Tagore Vision’ in 2013,” Shibani says

For Shibani, releasing her own CD and singing Rabindra Sangeet at the prestigious All India Radio Akashvani Kolkata and Yuvavani on Adhunik still feels like a dream.

This was just the beginning of Shibani’s musical journey. She went on to perform on Rupasi Bangla, ETV, Channel One, Orange Bangla, and High News. She has also represented her talent for various radio channels like 94.3 Radio One, 104 Fever FM, 92.7 Big FM, and 91.9 Friends FM.

“While I love my work, I also made sure to participate in singing events which helped me to understand the current trends in the industry,” she adds.

Shibani is a state-level champion in Rabindra Sangeet, and has worked as a playback studio singer with many music directors including Ashok Bhadra, Abhishek Das, Sujoy Bhattacharyya, Amit-Anjan, and Pritam Dey.

“I have received the Talentino Award from the Colours Bangla channel and the ‘Role Model Award’ from the West Bengal government for outstanding performance in singing,” she says.

The 23-year-old cleared her higher secondary education in 2020 and is currently studying BA in Vocal Music (Hons) from Rabindra Bharati University. Besides this, she is also a singer at All India Radio, Akashbani Kolkata on Rabindrasangeet.

Going forward, Shibani wants to pursue a master’s in music and work as a playback singer. She will also be releasing her own song in a few months

She is now a participating singer in the 'Mini Concerts', a platform started by Atypical Advantage to support differently-abled artists.

(This story was updated to add the name of Shibani's parents and school.)