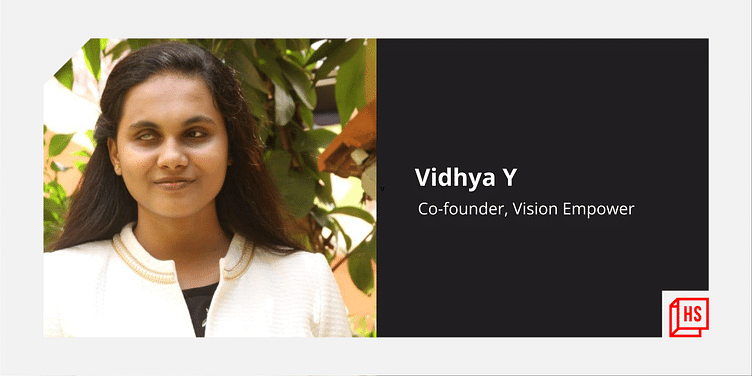 After topping all her classes in school and college, Vidhya Y was not offered a job on account of her blindness. She is now enabling children with visual impairments to receive a STEM education through her non-profit, Vision Empower.

Vidhya Y (28) was the first child to be born blind in Thirumagondanahalli village in Anekal taluk in the outskirts of Bengaluru.

As she grew up, friends, relatives and other villagers expressed their concerns over Vidhya’s future, and questions always centred around what she would do in the future, and whether someone would marry her.

However, Vidhya ignored the noise around her and discovered a love and passion for Mathematics and Science.

As a six-year-old, Vidhya recollects separating the segments from an orange and learning to count. She would also collect mustard seeds and rice and use them to learn numbers and counting.

However, when the formal education system and its infrastructure repeatedly failed her, especially when it came to higher studies in Mathematics and Science, Vidhya made it her mission to make education inclusive for all.

With just a primary school with Kannada as a medium of instruction in her village, pursuing education was difficult for most children.

The opportunities were even more limited for Vidhya and coupled with the stigma and ignorance around educating differently-abled persons, she often found herself in challenging situations.

One day, when Vidhya's neighbour was travelling in the city, he saw and followed a vehicle owned by an organisation for people with different types of disabilities.

"He followed it for 15 km and reached a charitable centre where visually impaired women were being given vocational training for a living. There was a girl, who had studied till the tenth standard and knew Braille," Vidhya tells HerStory.

Vidhya enrolled at the same centre and after two years, shifted to a formal blind school from the second standard where she would wake up at 4.30 am, finish her cleaning duties, and begin studying for the day.

"I was recognised for being the most disciplined student in the grade. It was a turning point for me because till then I didn’t know you could be rewarded for doing something,” she says.

Motivated by the recognition, she went on to top all her grades, and was often tasked with teaching Mathematics and Science to her classmates.

“However, I was advised not to continue with Mathematics as there were alternate options like humanities and economics offered by the major boards,” she recalls.

Vidhya was determined to study and shift to a regular school after the seventh standard. But she faced rejection from most schools she applied to.

"Some people told me to go to a special school while others were concerned about how I would be able to use the washroom. I ended up crying during a lot of interviews because I didn't know how to handle the situation,” she recollects.

Later, her family shifted to Attidele and she enrolled in Attibele Public School, managed to get tutoring, and made headlines when she topped the tenth boards with 95 percent in Mathematics and Science.

This achievement changed people's perception and expectations of her and finally, they began encouraging her to pursue higher education.

Vidhya says writing exams was especially difficult because she would get a junior student as a scribe who wasn’t qualified enough to understand the basics of the subject.

“Sometimes, when I said columns, they would write in rows and I couldn’t see what they were writing,” she says, adding that the 20 minutes of extra time given to students with disabilities wasn’t enough.

After sending seven letters to the education ministry, Vidhya was able to extend the time to one hour for students across India.

After completing her undergraduate studies in Computer Science from Christ (Deemed to be University), she became the first blind student in the history of IIIT, Bangalore and was offered an internship for a year, after she joined the master’s programme in Digital Society.

"I topped my class and got a gold medal, but the irony was that I did not get any job offers during campus recruitment. Everyone got a job except me," she says. Despite having made it this far, most employers were concerned about how she would commute to work or use computers.

"Whatever I said was not enough to convince them that I would be able to do as well as my other classmates. It was unfair because I had worked so hard throughout my life. The experience left me feeling depressed," she adds.

After a brief research internship with Microsoft, Vidhya decided it was time to take matters into her own hands and enable people with visual impairments to pursue a STEM education.

At IIIT Bangalore, she met her co-founder Supriya Dey and both joined hands to ideate and build ﻿Vision Empower﻿ with help of Professor Amit at the institute.

She says, "I knew that if I could do it, everyone else can, if given the right resources."

As a first step, Vidhya did not want to bank on her experience alone and visited schools to interact with students and teachers to understand what they needed.

Vision Empower began making textbooks accessible in Braille for both texts and diagrams with some of the diagrams in 3D models as well.

In its five years of operations, the organisation has worked with more than 23 schools in Karnataka, Tamil Nadu, Kerala, Tripura, Delhi, and Gujarat.

It trains teachers – most of whom are blind or visually impaired– and equips them with the necessary skills to teach computational thinking to children.

The coronavirus pandemic presented a different challenge; the visually impaired teachers were helpless when everybody seamlessly shifted to online learning.

To aid them, Vision Empower started a project to impart digital literacy and make the best use of online platforms like YouTube and Zoom.

"I made 23 audio tutorials in Kannada and some in English that are now getting translated into different languages. Teachers were able to learn basic use of phones and apps like Google Meet and some other platforms designed for visually impaired people,” she adds.

It has also developed an accessible learning management platform Subodha where students can access all learning materials.

Speaking of entrepreneurship, Vidhya says, the task ahead is to look at a sustainable revenue model as funding is a challenge. It has so far run on Corporate Social Responsibility (CSR) funding from various companies.