A super app for all things queer: Pride+ 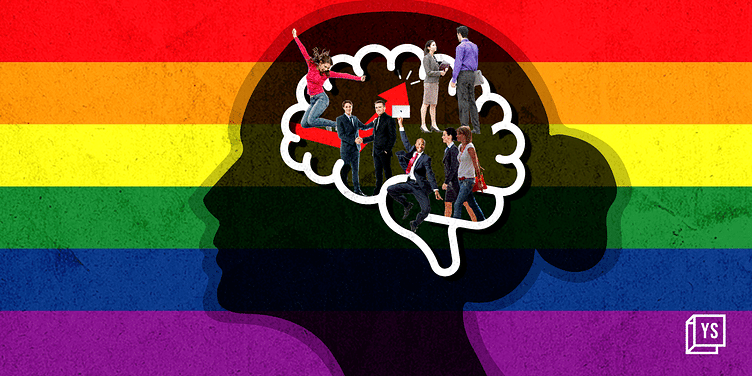 With services such as mental health support and therapy, dating, social media, job listings, upskilling, clothing, art selling and buying, and entertainment, Pride+ aims to offer a one-stop-shop for the LGBTQIA+ community.

A 2021 survey across 27 countries by global market research firm Ipsos revealed that 80 percent of people identified as heterosexual, three percent as homosexual, four percent as bisexual, and one percent each as pansexual, asexual, and other. When it comes to India, in 2012, the government claimed there were 2.5 million gay people in the country, based on individuals who had self-declared to the Ministry of Health.

However, the stigma against the community continues and there are hardly any ‘safe spaces’ for LGBTQIA+ individuals.

It all began with an email he received at his last workplace. The human resource department wanted employees to refer “handicapped, female or LGBTQIA+ candidate” for a role. Successful hires would result in a referral bonus.

“I was furious… to treat people from the community like a trophy,” Aayush tells YourStory. Then, he was shaken by an advertisement featuring a group of transgenders in which a gay teen confessed he was refused photography classes due to his sexual orientation.

Another shocking moment came after a conversation with a friend from the LGBTQIA+ community on how intersex people didn’t have access to appropriate intimate clothing. Aayush’s research told him they either depended on do-it-yourself methods or just compromised to wear what was available.

In 2020, Aayush began building a go-to-platform for queer people and started working on Pride+, a super app that would cater to everything anyone in the LGBTQIA+ community would need. A product of Pranah Sandbox—incorporated by Aayush in February to create a sustainable and inclusive platform that would allow fair services to be accessible to all—it is currently in stealth mode.

The app provides a bouquet of services including mental health support and therapy, dating, social media, job listings, upskilling, clothing, art selling and buying, and entertainment—all for the LGBTQIA+ community.

Set to be launched later this year, Pride+ has a six-leg marketing plan in place, says the founder. “The app will be available for iOS and Android devices initially. Then, it will be launched worldwide, with a few exceptions including China and North Korea.”

Pride+ wants to be the go-to platform for any and all needs of the LGBTQIA+ community.

It will provide counselling and therapy, and help individuals document their ‘coming out’ in any form—text, audio, visual and video—and release it on the app’s social platform.

Pride+ also aims to help tackle bullying and harassment at school, colleges, or workplaces, and guide them to initiate a conversation at home, workplace, or even in the neighbourhood, and fight gender identity crisis.

“The few platforms available either do not exclusively cater to the community or are ridiculously expensive. We provide the first session for free, and then charge less than 1/10th of the standard market cost (usually $200+),” Aayush explains.

At present, he is in talks with two companies to integrate mental health support on Pride+. Healthtech startup Evolve is also working towards providing accessible mental health solutions to the community.

When it comes to dating, global platforms like Tinder and OkCupid cater to all genders and are trying to be more inclusive and queer-friendly. More popularly, there is Grindr, which is an all-male dating app for cis and trans men.

But there are no dating apps for the LGBTQIA+ community in general and Pride+ aims to fill this gap. “The app will be safe, secure, and private. Builder.ai and we have worked on this very thoughtfully. Neither will there be ads or selling of user data, nor a lack of resources to report anything that makes a user feel uncomfortable,” Aayush explains.

Entrepreneurship 101: How can Indian startups be really inclusive?

He has a dedicated team to help prevent bullying and harassment, and is also in the process of adding an emergency SOS feature on the platform.

The platform will also feature a special curation of clothing, lingerie, drag makeup, and wigs at affordable prices. While homegrown brands such as Bobo Calcutta, Almost Gods, Biskit, and Huemn cater to gender-neutral fashion, Pride+ wants to build an in-house brand by bringing a curated collection of gender-fluid clothing options from small businesses.

Pride+ wants to highlight the “art quotient” of the LGBTQIA+ community by displaying and selling physical art and NFTs on its platform.

With the help of LAMP Studios’ various tie-ups, Pride+ will create content for the community, ranging from real-life documentaries, comedies, drama, thrillers, and romance. Aayush has already onboarded eight creators from India and two from abroad for the same.

The app also wants to provide upskilling and reskilling services, and host a job-listing forum as well. “In order to prevent people from falling into begging and prostitution, our free education module will provide users free courses, upskilling and reskilling courses,” says Aayush. "We will curate jobs that ensure we get people to roles solely based on their merit, and not for gender representation, equality, PR or incentivising others.”

The app will be available in major Indian languages, besides English and foreign languages such as Spanish, Russian, Japanese, Portuguese, and Arabic. Pride+ has an ‘Unsure’ feature for users who are struggling to identify themselves or simply choose not to.

The Ipsos study revealed that 24 percent of the 500 Indian adults surveyed were either unable or unwilling to define their sexual orientation. In fact, the study suggests that about two percent of the Indian population define themselves as transgender/non-binary/non-confiming/non-conforming/gender-fluid or ‘in another way’; and another one percent prefer not to reveal.

Pride+ has a 30-member engineering team across the UK, South America, and India. Additionally, it has a three-member marketing team in Delhi and Mumbai, two writers in Mumbai, and a legal and an accounting team.

Former employee and a member of the LGBTQIA+ community, Sasha R says, “In theory, it is a great idea to consolidate it all in one place. Executing the idea can, however, get a little complicated, especially in terms of safety and filtering out bullies from the platform.”

Aayush says the team has integrated advanced artificial intelligence and facial recognition technology with a large data repository, and users will have the freedom to make any or every activity private or public.

Fundraising, though, is one of the biggest challenges.

Since the inception of the idea in 2019, Aayush has invested Rs 32 lakh on research, surveys, and development of the app, in-house pre-design of the prototype, employee salaries, workshops, marketing, and engineering. He has exhausted all his savings, marriage fund, mutual funds, and deposits to build the team and platform.

At present, he is actively looking to raise external funds. He reveals that he approaches at least three investors every other day, but nothing fruitful has happened yet. “The biggest challenge is the lack of understanding, exposure, and education about the total addressable market, besides the difficulties associated with getting into the meeting room with the big investors,” Aayush says.

But there’s a plan in place. The founder says Pride+ has a sustainable revenue model in place—it will charge users for premium dating, recruitment, and entertainment services.

“It is a fight. It takes blood and sweat, and demands so much patience. All I need now is an investor who understands the TAM," Aayush says. "As per my latest research run, out of the 1.4 billion non-binary people, four percent prefer not to identify themselves as non-binary in public, and 12 percent don’t even know what their sexual identity is.”