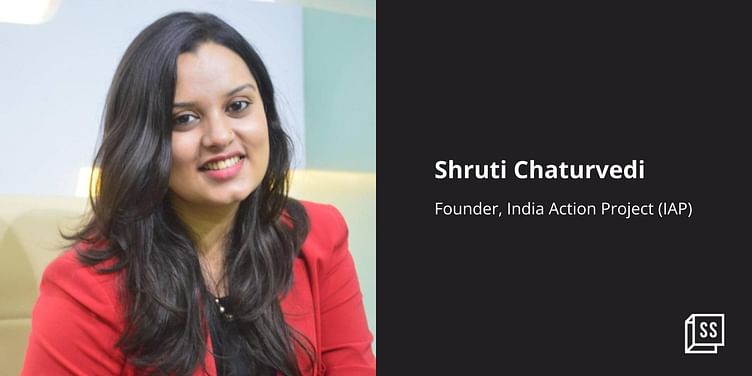 The Government of India has launched various programmes for the development of rural population, including the National Rural Livelihood Mission, MGNREGA, Bharat Nirman, and others. However, most of the time, the rural population is not aware of such programmes or the procedures to fully benefit from them.

Shruti Chaturvedi founded ﻿India Action Project﻿ (IAP) early this year to solve these challenges by bridging the gap between decision makers and beneficiaries with the use of data, technology, and communication models.

IAP is a Gujarat-based civic-tech startup where young Indians are on a mission to unlock India’s social, economic, and political potential.

It has a team of Jan Saathis (who are one among the locals), focused on creating awareness and addressing the challenges faced by rural India by enabling meaningful conversation channels and leveraging data intelligence.

Shruti got the idea to start IAP while running her media startup Chaaipani, which is focused on stories of people who were doing more constructive work on the ground.

“The social impact idea came from that point. When you see problems, bridging the gap is good enough to solve this problem in its entirety. It is about how you make use of the existing resources for good,” she says.

Following this, she travelled across villages of her home state Gujarat as well as Maharashtra for about three months to understand their problems. She covered 2,500 villages in Gujarat and about 80 villages in Maharashtra, where she met the sarpanches (decision makers), and spoke to the public officials.

“We often see in the news how people are not getting the benefits they deserve. I wanted to see it for myself and understand better,” Shruti says.

She explains how almost 80 percent of the people in the villages are not aware of social welfare schemes, let alone how to avail them.

“They would rather go to the farm and get their daily wage than going to government offices and do the paperwork for the schemes,” Shruti says.

Shruti and her 18-member team decided to map various central and Gujarat state government schemes and policies in the healthcare, housing, and education sector. They then developed an app to include these in.

The next step was to create a network and train people (Jan Saathi’s) in the village to identify those who are eligible to avail the schemes and connect them through the Jan Sambandh App.

Though IAP was started with Shruti’s personal funds, it recently received a grant of Rs 7 lakh from IIT Kanpur for app development and is also exploring fund raising options.

While there are many civic startups in India, Shruti says that there is none working on the government schemes that she could look up to while developing the app. Hence, identifying a market was one of the challenges for her team.

As of today, IAP has appointed 1,000 Jan Saathis from 1,000 villages across Gujarat that consists of men and women aged between 25-40 years. These Jan Saathis are trained to understand the schemes and the digital platform through which processes can be done before they start interacting with the village people.

Shruti says she has seen locals getting more comfortable interacting with the Jan Saathis as there is an unsaid credibility that comes along as they are not outsiders, but one among them. Each village will have one or two Jan Saathis who are basically locals who have day jobs but still have time to get trained and work for IAP.

Apart from creating awareness about government schemes and policies, these Jan Saathis facilitate application and follow-up for people who cannot travel to panchayat/taluka offices, have inadequate documents, and don’t know how to apply. They keep mapping local job opportunities in nearby villages and constituencies and spreading the word about it in the village so people can apply. For this, a nominal fee is charged by the Jan Saathis.

The Jan Saathis get paid every time a partner is on board for a campaign. IAP also partners with local organisations such as Gujarat Kshatriya Thakor Sena (which works on minority community issues) to avail freelancing opportunities to Jan Saathis--for example, doing market research for a product, becoming village level point of sales, etc. The companies pay them per conversion.

IAP has appointed people from its core team to collect the data from the villages and analyse what is working, which village is not responding, etc. As of now, IAP measures impact through the job opportunities it generates and the financial benefit the local people are receiving.

The startup is now targeting to create one million Jan Saathis in three years, which thereby translates to one million people in rural India getting access to livelihood opportunities--including women who are not allowed to go out to work, people with disabilities, and other marginalised communities.

This startup hopes to pack a punch with sustainable packaging products