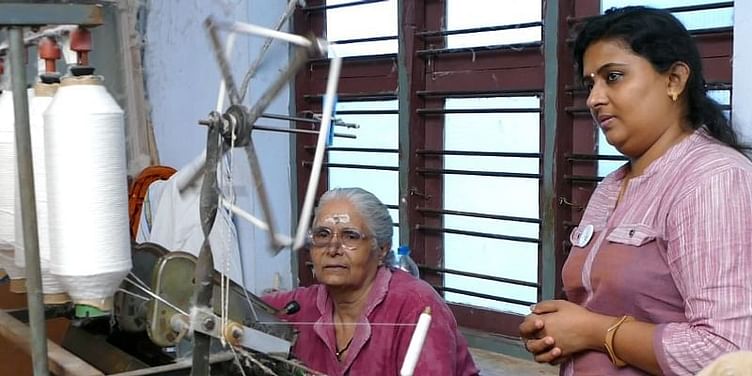 On a whim yet cognizant of the fact that her platform, Empowering Women Entrepreneurs (eWe), adhered to at least three to four SDGs, Sangeetha sent her application.

“I applied in March, and after several rounds comprising various pitches, workshops, and meetings, I was called for the final interview in July. It had competitors from around eight other nations,” says Sangeetha, a former professor in Biochemistry at a college in Payyanur, Kerala, in a chat with HerStory.

When the World Women Entrepreneurs’ Award by Junior Chamber International Hong Kong’s (JCIHK) came calling for Sangeetha earlier this month, she had beat over 225 women entrepreneurs from across the world. Since then, Sangeetha hasn’t had a day’s relief from media interviews and phone calls, a far cry from the quiet days her enterprise had witnessed when it was founded in late 2018.

For Sangeetha and her husband Abhay, a computer expert, sustainability and community development were core beliefs when they jointly started eWe as a platform to bring together traditional weavers of coastal Kerala. eWe was incubated under MiZone (Malabar Innovation Entrepreneurship Zone) Kannur, the startup incubation centre of Kerala Start-up Mission (KSUM).

They started the company with a MUDRA loan of Rs 10 lakh, which was sanctioned in a record six days. Since then, eWe has received KSUM’s grant of Rs 12 lakh, which has been used to ramp up the platform’s technology, and a seed fund of Rs 15 lakh, also from KSUM. According to Sangeetha, eWe has managed to earn a revenue of about Rs 30 lakh in the last financial year, and hopes to touch Rs 40 lakh by end of this year.

The couple moved to Kannur in Kerala to work closely with the handloom weavers in the coastal town. They set up the eWe office in the ancient trading port with the objective of bringing khadi and handloom products into the mainstream.

“The weavers were already doing a great job, but they needed a way to sell their products at a fair price. That’s how we thought of this,” says Sangeetha.

Kannur and Payyanur regions in Kerala are particularly known for cotton fabrics weaved by the Saliya community, who were brought from Tamil Nadu centuries ago by the Chirakkal kings for producing fabric for the royal family.

In the present day, the weavers work incessantly at giant looms to produce bed linen, upholstery, curtain materials, shirts, saris, and furnishing fabrics, but as Sangeetha says, “they are hardly aware of what happens to the beautiful fabrics they weave once it leaves the looms.”

She continues, “From 2017, we spent a lot of time with the weaving community and identified two main gaps in the sector–weavers themselves didn’t know the potential of their products, and the next generation of weavers’ families did not want to get into this profession as they felt it was not lucrative.”

“Be it raw materials, craftsmanship, or skill, Kerala has it all, and we have been making handmade products that are internationally renowned. However, these artisans do not know how to market it and seek a fair price. We wanted to give them a platform to sell their products.”

Sustainable income generation was another key factor that motivated Sangeetha, as she says she noticed that a lot of women had to give up their day jobs to look after their families.

“While I wanted them to have an income by doing something from the comfort of their homes, I thought engagement and learning were also necessary. I thought they could be resellers of these handloom and handicraft products, and we gave them the title eWe entrepreneurs.”

The eWe women entrepreneurs are given their own sub-domains on the eWe website, and each reseller is trained to operate her own e-store. “It needed to be something more than just a Facebook or WhatsApp page. Having their own domain helped them have an identity of their own as a reseller of premium brands,” says Sangeetha, whose work was recognised by JCIHK for bringing social change and financial stability among women entrepreneurs.

Currently, eWe supports a network of 200 women entrepreneurs in seven districts of Kerala. Thirty-six-year-old Sreeja from Thrissur, and Soumya, 30, from Nileshwar are just a couple of women who are part of this network.

“Naseeha from Mattool came to our entrepreneurship workshop with her husband and joined us as a reseller. Two months into being an entrepreneur, Naseeha came into her own and succeeded beyond expectations in the way she dealt with customers and adopted marketing.”

Acknowledging the support of Kerala Start-up Mission and its mentorship programmes, Sangeetha says, eWe was lucky to find a mentor in angel investor Robert Lobo, former President of Raymond Apparels. “Having been in the apparels industry for close to 30 years, Robert was able to advise on several aspects like what to avoid, what to focus on in this sector, and how to integrate technology. Thanks to that, eWe now follows an inventory-less model,” she adds.

eWe does not have a production unit of its own, but does tap into the resources of the garment units in the region. “A lot of these garment units did not have enough business to sustain or repay loans they had taken. We have identified four such units in Kannur and upskilled the weavers and trained them, and we now leverage these units for fabric production,” says Sangeetha, who has about 12 full-time employees working at eWe.

Speaking about the most fulfilling part of her job, she says, “It is seeing the journey of some of the resellers--from being timid and shy women to becoming independent in several ways. One lady recently called me and said she had bought a two-wheeler, and wanted to show me her new possession. That joy is just unparalleled,” says Sangeetha.