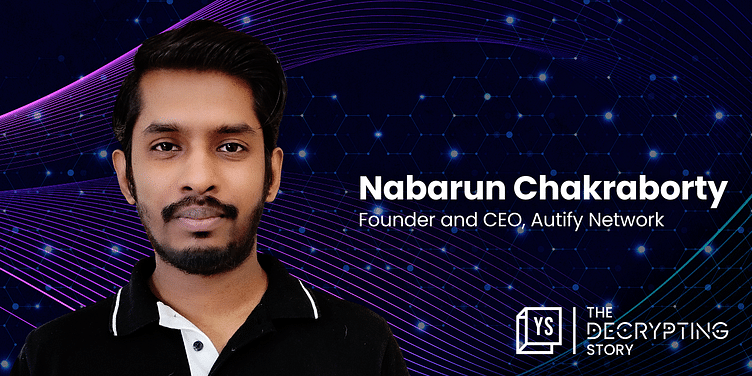 Throughout his working career and entrepreneurial ventures, Nabarun Chakraborty has dealt with supply chains in one way or another.

For his jewellery and electric vehicles ventures, he regularly sourced raw materials from all over the world.

But he realised that supply chains were rampant with counterfeit products and materials, as the systems in place had no way to ensure transparency of goods and protect buyers from malicious actors in the chain.

“Due to counterfeiting issues, my startups used to lose money each month. I tried looking for a solution, and when I realised there wasn’t one built yet, I had an idea to build it myself,” he tells The Decrypting Story.

Leveraging blockchain technology to bring transparency to supply chains, Autify ensures original documents and events are reported in real-time and made available to authorised actors. It is also building insurance blocks that automatically trigger payouts based on real-world data to suppliers, manufacturers, and brand owners.

Further, its Decentralised Finance (DeFi) wing will provide liquidity/microfinance to supply chain participants. Together, these factors aim to curate a safer ecommerce experience for brands.

“The problem is massive. I realised its scale when I began conducting user research and understanding the problem in detail across fashion, automotive, and luxury sectors,” Nabarun says.

In fact, counterfeiting is the largest criminal enterprise in the world, a 2018 Forbes report revealed, and sales of counterfeit and pirated goods totals $1.7 trillion per year. Since then, some estimates say it has risen to $2.7 trillion.

Counterfeit goods have thrived because global supply chains are highly complex and involve many actors resulting in loss of data authenticity when information is shared between players and constantly entered into new, discrete supply chain management systems at various stages.

Blockchain tech, which is essentially immutable and transparent distributed ledger technology governed by a network of participants, has emerged as a possible solution.

The idea of using blockchain to solve supply chain problems is not new but Nabarun says previous attempts were perhaps too early. Many large enterprises were unwilling to experiment with the technology because of its association with a volatile asset class like cryptocurrency.

“Earlier, there were only a couple of public chains, and they were slow and expensive. Now, the tech is more mature. There are many chains with low transaction costs and high throughput. People are exploring building real-life use cases (such as supply chains) on these chains,” says the founder.

With the increased awareness around blockchain, many startups are exploring uses of the technology in enterprise supply chains. koineArth, a blockchain project led by Indian founders, is one such example.

Autify’s platform, which is still being built, will be a public-private hybrid. It will allow permissions at each stage to allow brands to provide certain permissions to distributors, retailers, and consumers. It will also use computer vision and Artificial Intelligence (AI) to identify and authenticate digital twins of physical items at scale.

The startup has raised $1.9 million in funding across a pre-seed round led by Loop Ventures, as well as angel investments and grants from NEAR Foundation, Filecoin, Biconomy, and Dfinity.

Despite the promising and maturing technology at hand, Nabarun still finds it challenging to convince enterprises to adopt such a solution.

“Companies have many decision-makers. Sometimes it takes months to even get a meeting with them. Therefore, we’re building a modular platform which any firm can use without our active involvement. They can just plug and play on the platform while our technology takes care of all the complexities,” he explains.

In Autify’s case, any such transactions in a supply chain will occur on a permissioned chain, which will preserve the privacy of its participants. The digital twins, however, will be on a public chain to allow for easy verification.

The startup’s current focus is building traceability and origin for supply chains, counterfeiting verification, and authenticating digital twins of physical items. It will later work on its DeFi and cross-border commerce features. It has begun beta development by working closely with several enterprise customers, says Nabarun.

Autify started development on Ethereum due to its widespread popularity but due to high gas fees and slow speed, it shifted to NEAR Protocol. It is also exploring possible solutions with Polygon, which is Ethereum Virtual Machine (EVM)-compatible.