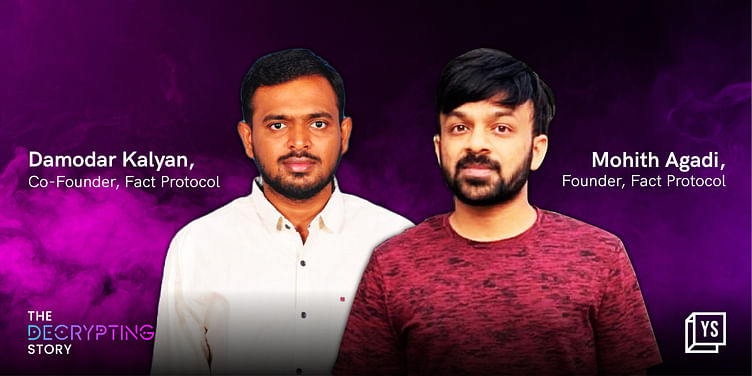 In such a world, Mohith Agadi - a digital marketer, SEO specialist and blogger - developed a strict regimen of fact-checking almost everything. It began with ensuring there was no misinformation in his articles. Now, he constantly checks images, videos or news articles he sees online or those shared by his friends.

The problem eventually grew so close to him that he set up a company to fact-check information at scale.

“We want to be a Wikipedia for fact-checking, and get contributors from all over the world,” Mohith tells The Decrypting Story.

Fact Protocol offers the opportunity for any user to become a validator, provided they can perform fact checking accurately. All that is required is following the guidelines to the tee or having experience in the domain.

The process is fairly simple. When someone shares a news article or piece of content, the fact-checkers set out to validate it. This process involves searching the web for reliable sources of information relevant to the piece of content. After this, the fact-checkers proceed to validate it. Once this is complete, the piece of information is stored on the blockchain, creating a traceable record for anyone to verify.

“Timestamps and transaction hashes for the content are present on the chain, and everything is censorship resistant," Mohith adds.

He adds that this can help readers compare the original version with an updated version or a potentially tampered piece of information.

Fact Protocol is currently working on the final stages of this fact checking, with the platform set to launch in the next few weeks. As it scales, the core team will step back from screening fact-checkers, and will empower existing validators to review new applicants.

The fact-checking project is named 2FA News, while the division working on the blockchain and Web3 elements is named Block Quest. Fact Protocol’s tech is being built on Ethereum-scaling chain Polygon, and the startup will incentivise and reward its contributors with its native FACT token, which will be launched at a later stage.

The FACT token will also act as a governance token to democratise the process of forming new rules and taking certain decisions.

Archived content will be stored for retrieval on IPFS (InterPlanetary File System), a repository built on Ethereum.

Mohith says Fact Protocol has also been collaborating with IFCN (The International Fact-Checking Network) to aggregate fact-check results and onboard more validators under its standardised guidelines.

“IFCN has guidelines in place for fact-checking, but is not confident of building Web3 and blockchain capabilities by itself. So we will bring in some IFCN members and fact-checkers, and validate their work before putting them on-chain,” says Mohith.

While the focus is now on fact-checking text content, the startup has also been exploring validating images and video. Mohith claims the team has been leveraging Adobe’s open source tools for checking images, and are trying to deploy it onto Fact Protocol’s platform.

He also sees tremendous potential in enterprise-use cases of fact-checking technology. He plans to introduce an enterprise-grade suite of tools for validating the authenticity of content, and sees this as a leading source of revenue for Fact in the future.

The core blockchain tech being built for a fact-checking system can be extended to build a wider, verifiability layer for Know Your Customer (KYC) and ID verification, document verification, authentication tools, and more. Fact Protocol plans to eventually build this.

Building out such technology is certainly a challenge for a young and bootstrapped startup like Fact Protocol. Reports suggest the complexity, costs and necessary advancements in blockchain tech required to build a global, decentralised fact-checking system are high.

However, Mohith is optimistic. “There are many platforms working on democratising content creation or boosting citizen journalism, but we haven't seen platforms solving fact-checking with Web3 on a network level… while there are similar efforts in enterprises the market is simply too big for only one project," he concludes.