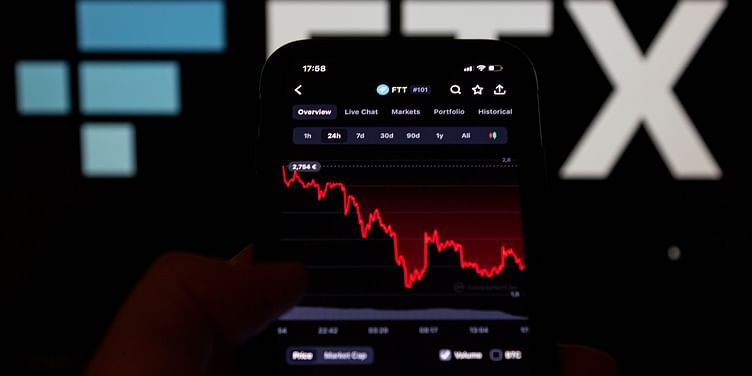 With several Indians likely to lose their investments on FTX, Indian exchanges such as CoinSwitch and CoinDCX are reevaluating the battered market and even advocating for stronger policies and regulations.

“I chose ﻿FTX﻿ as it was backed by the biggest VCs and industry players. They were exhibiting a too-big-to-fail kind of aura,” Ram tells The Decrypting Story, adding that he was drawn to FTX also for its deep liquidity pools.

Valued at $32 billion, FTX was the third-largest crypto exchange by trading volume globally. It had raised $1.8 billion in capital across seven rounds from 40 investors, including Singapore's Temasek, SoftBank's Vision Fund 2, and Tiger Global.

Another crypto trader from India, Alok too fell for the FTX narrative and has Rs 12.5 lakh worth of assets at stake.  “It was shocking, I did not think it would become a Lehman moment,” he says, "The sentiment is at rock bottom."

The bankruptcy of Lehman Brothers, the fourth-biggest investment bank in the United States more than a decade ago, triggered the 2008 global financial crisis. Lehman’s bankruptcy was said to be the largest in history, surpassing those of WorldCom (2002) and Enron (2001).

Too big to fail

Several domestic exchanges including ﻿CoinSwitch﻿, ﻿CoinDCX﻿, and ﻿WazirX﻿ offer crypto trading services. However, many Indians opted for FTX which registered in the Bahamas, although the country’s policies on the technology are ambiguous.

The investors' main concern was that Indian exchanges lacked the liquidity to fulfill orders worth of lakhs and crores of rupees.

“Usually, anything about Rs 10 lakh just becomes a whale order and blocks the price movement. I couldn’t wait hours for a simple order execution and hence chose FTX as it was considered to be safe, given the media narrative and volumes that were traded on the exchange,” says a user, requesting anonymity.

Alok says FTX Founder Sam Bankman-Fried's guest appearance on a podcast hosted by a well-known Indian YouTuber also piqued the curiosity of many Indian users. “Nearly 50,000 viewers tuned in to watch the podcast,” he says.

Since FTX’s bankruptcy filing, industry experts believe Indian customers have very slim chances of recovering their funds from the exchange as FTX was not licensed in India.

“Even if any legal action is initiated by a customer in other jurisdictions and any order is consequently passed by a court or law enforcement agency, the funds can only be disbursed by the liquidators as per the laws of the Bahamas,” said Purushottam Anand, Advocate and Founder of Crypto Legal.

FTX's balance sheet shows it has a staggering $9 billion in liabilities and less than $900 million in liquid assets.

Further, funds will be first dispersed to various stakeholders in order of priority as per Bahamas law. “The creditors and venture capitalists will get priority over customers. The possibility of a full recovery of funds for a customer seems highly unlikely,” Purushottam adds.

FTX's collapse has shaken the crypto world, with the overall crypto market cap plunging to as low as $763 billion recently from a peak of $2.5 trillion in May 2021, as per CoinMarketCap data.

The “FTX crisis was caused due to high leverage, mishandling of user funds, and poor risk management, and it shook the industry,” says Ashish Singhal, Co-founder and CEO of Indian crypto exchange CoinSwitch.

One of the key triggers for the exchange's collapse was early speculation around its FTT tokens.

A CoinDesk report revealed earlier this month that FTX allegedly used FTT to cover up losses made by its sister firm Alameda Research and used customer funds to bail out firms including Voyager and BlockFi.

It's to minimise such risks that CoinSwitch and CoinDCX do not offer exchange tokens.

Although native exchange tokens are fairly common in offshore exchanges, “CoinSwitch does not offer native token," says Ashish, adding that although "this may seem unexciting, recent events show this is a responsible model. Risk management is not meant to be exciting.”

Need for better policies and regulations

The FTX crisis has also sparked discussion regarding a potential solution known as "proof of reserves"— a process of comparing on-chain assets held in reserve to off-chain liabilities. In other words, it helps users to audit digital asset reserves held by a custodian on demand.

On November 17, CoinSwitch announced an independent third-party report to confirm its overall holdings. “In the absence of regulations that mandate such reviews, the onus is on exchanges and intermediaries to be proactive and transparent. This report is just the beginning of many such steps to come,” Ashish says.

Earlier in a company blog post, Sumit Gupta, Co-founder and CEO of CoinDCX, had stated that “proof of reserve without proof of liabilities is only half the picture. We’re working on publishing the R2L ratio periodically, along with audit certificates.”

Despite the FTX meltdown, domestic crypto traders are optimistic, insisting that speculative bubbles and crashes have existed for years and that the sector will only evolve in the years to come.

“When Lehman Brothers went bust we did not stop using banks," says Alok. "The crisis will lead to stronger regulations and better transparency.”

(The names of Ram and Alok have been changed at their request.)