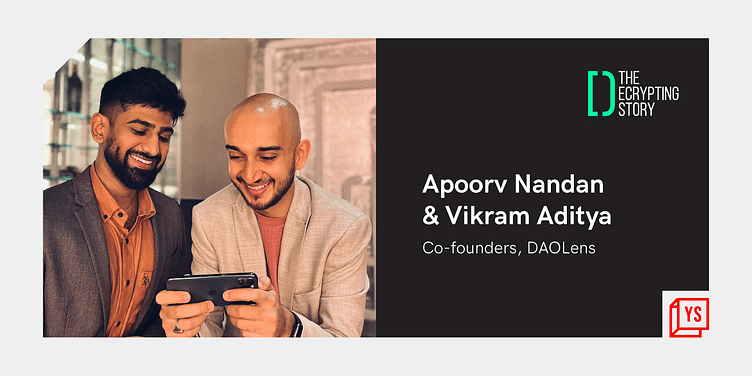 At present, a vast majority of enterprises are centralised, with a top-down pyramid structure governed by a regulating body. However, several Web3 enthusiasts envision a decentralised future devoid of hierarchy and hope Decentralised Autonomous Organisations (DAOs) could enable this dream.

While Apoorv Nandan and Vikram Aditya too believe in this decentralised future, the duo noticed that using DAOs could be a complicated process for new and inexperienced users.

In an attempt to bridge the gap between contributors and DAOs, the duo teamed up to launch ﻿DAOLens﻿ in January 2022.

The Bengaluru-based startup is building a host of infrastructure-based DAO tooling to minimise the contributor churn and help new users onboard a DAO.

“Our main goal is to simplify the functions and help users onboard and contribute. DAOs today consists of 15-20 thousand members, but they do not see much participation from the contributors. DAOLens is trying to fix that ratio so that more contributors can engage in a DAO,” Vikram tells The Decrypting Story.

The origin and evolution of DAOLens

Apoorv and Vikram have known each other for more than 9 years, having studied together at IIT Guwahati.

It was in 2015 that the two developed an interest in crypto and blockchain technologies, despite starting their careers in different fields.

However, while discussing Web3 and the future of work, an underlying trend of DAOs caught their attention.

“It wasn't an idea that occurred to us out of the blue. Rather, a lot of conversations and research around DAOs, Web3, NFTs, protocols, and social tokens inspired us to co-found DAOLens in 2022," says Vikram.

They realised there was a need for a single platform where users could access all onboarding information on DAOs.

“We noticed that the information was ad hoc…there are a number of DAO platforms offering specific solutions for users but there is hardly any one platform to receive information regarding DAOs, including onboarding, process, communities, or contributing, and hence, we decided to build a platform to help users," explains Apoorv.

The startup is building an infrastructure-based DAO tooling to help DAOs effectively onboard and manage their contributors.

Apoorv explains "For instance, when a new user joins DAO, it can be a tedious process to figure out the technical aspects of joining. In order to minimise the process, we are offering our tools so they can design personalised onboarding flows for new users."

He adds that this also gives DAO operators an overview of new users, which will help them understand their needs and interests.

With a team of 20, the bootstrapped startup is currently at the proof-of-concept stage. The product is chain agnostic— it is not structurally linked to one particular blockchain. Instead, the project is ‘blockchain neutral’ and can potentially switch from one to another as needed.

It is currently trying to sell the product DAOs directly via a B2B model using subscriptions as a revenue channel.

“In the next five to six months, we will focus solely on ensuring that we are well-established in terms of integration and tools,” Vikram says.

According to the founders, the majority of the Web3 ecosystem uses Web2 technologies, which means the data is off-chain rather than on-chain.

“Even if it's just one Web2-based product, this would be a barrier to chain-integration, and hence, we are building new-age tools that are on-chain, focused on Web3 eco-system.”

In the long run, DAOLens aspires to be the default engagement platform for Web3 contributors, as well as the go-to platform for any traditional organisation, group, or community interested in forming a DAO.

“After extensive research, we discovered that several Web3 business verticals have the potential to become billion-dollar businesses, and in the long run, we intend to help them with onboarding, deploying SMART contract, enhance product management,” Vikram says.

What is a DAO? All you need to know about a Decentralised Autonomous Organisation

The future of work is in DAOs

“People are moving away from traditional centralised working practises and envisioning a more decentralised future. In the future we believe that enterprises, communities, and organisations will structure in DAO,” says Vikram, adding that DAOs will be the centre of new economies.

“We have had conversations with nearly 300 Web3 startup founders, and we believe DAOs will continue to evolve and be the future of work,” he says.

According to reports by Kraken, DAOs have emerged as one of the fastest-growing mediums in the Web3 space since February, with 188 DAOs controlling $12 billion digital assets.

As a result, demand for DAO tooling platforms has increased. Some of the platforms in the space include Aragon, Colony, DAOHaus, and Boredroom.