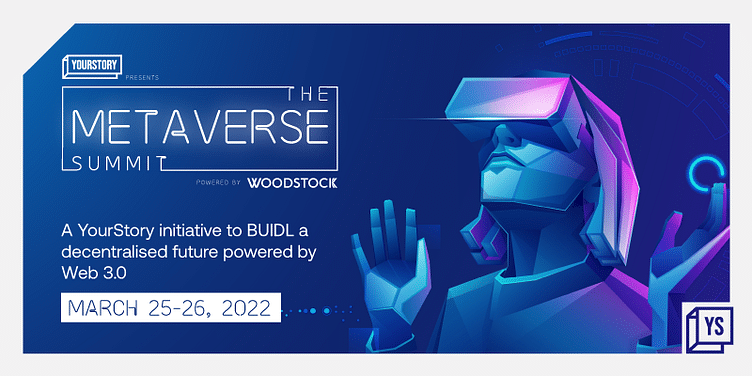 India's first Web3 conference, YourStory's The Metaverse Summit - powered by Woodstock, brought together the global blockchain and Web 3 ecosystem together on March 25-26, 2022, to build for a decentralised future and accelerate innovation in the building blocks of the Metaverse.

Here are some of the key highlights from the summit:

At The Metaverse Summit, Ajit Mohan, VP and MD, Meta, India spoke about the burgeoning depth and quality of the Indian developer ecosystem, with the country projected to have the largest number of developers in the world by 2024.

“India has a huge role to play in shaping the future of the current internet, and in shaping the future of the internet, which we see as the metaverse,” highlighted Ajit, as he spoke about the big transition that's happened in the last five to six years where more than 700 million people being online. Riding on the power of the new internet natives, India is slated to define the ethos of the open internet," he said.

India has a huge role to play in shaping the future of the internet, the metaverse: Ajit Mohan, VP and MD, Meta India

Secrets of investing in Web3

At The Metaverse Summit, Sequoia India MD Shailesh Lakhani shared his thoughts on why he finds the metaverse and Web3 interesting and how he looks at the future.

“It may be that there's so much space on the metaverse that you don't need to own anything. So these structures are very new and still forming. But we're spending a lot of time just playing around and seeing what people are doing in these areas,” said Shailesh.

He added: “Although there's lots of regulatory uncertainty and how that actually plays out, tokens are a form of ownership or access to a community, what they enable you to do is still programmatically define what that means, unlike the shares or debt to a company. So people are getting very creative about what you can do with them."

Sriram Iyer, Director of Engineering International at Coinbase, offered critical insights into the merits and challenges of building a completely remote team for a global crypto startup.

Sriram reminisced how during COVID-19, he was actually expecting to see a huge drop in productivity. On the contrary, he found that they were, in fact, doing better, and with the right constructs, remote working could be a great way to work.

He emphasised the fact that being remote has given Coinbase the liberty to tap talent anywhere in the world. However, there are side-effects too. Unlike the traditional decision-making framework with people gathering in a boardroom, there needs to be extensive documentation and complete synchronisation in the decision-making process.

At a roundtable discussion at The Metaverse Summit, Kaavya Prasad, Co-founder, Lumos Labs, and Roshni Aslam, along with YourStory’s Rishabh Mansur, and Sindhu V Kashyap, talked about the underrepresentation of women in Web3, and what can be done to get more women participating in the space.

“While women are significantly underrepresented in the Web 3.0 universe, we need to understand that this is an engineering movement. So the problem arises with the fact that there are fewer women engineers. The gender ratio is already skewed towards men. And a way a smaller group of women enter the web 3 world,” said Kaavya.

It is no secret, the crypto world in the Web 3.0 universe is still volatile and nascent. Roshni believes it could be one of the reasons why women feel discouraged.

“We women tend to look for security, and most of our decisions are risk assessed. And by nature we think ten years ahead. So joining a volatile space can be a little riskier,” added Roshni.

Ashish Singhal, Founder and CEO, CoinSwitchKuber and Madhumita Harishankar, Co-Founder, Nume Crypto, debated how India uniquely positioned to emerge as a world leader in crypto, and what are the advantages and challenges that lie ahead.

Madhumita cited how India has shown an extraordinary aptitude for quick tech adoption in the last few decades — a tendency to “leapfrog, sometimes multiple generations of technologies” — be it quick smartphone or 4G adoption, responding to disruptive price points.

Ashish highlighted, “This time, we are ready, we have the right skills, we have an amazing engineering population of over 4 million engineers in India; 12,000 of them are blockchain engineers. So, not just as a service provider, India is emerging as a platform builder in Web3."