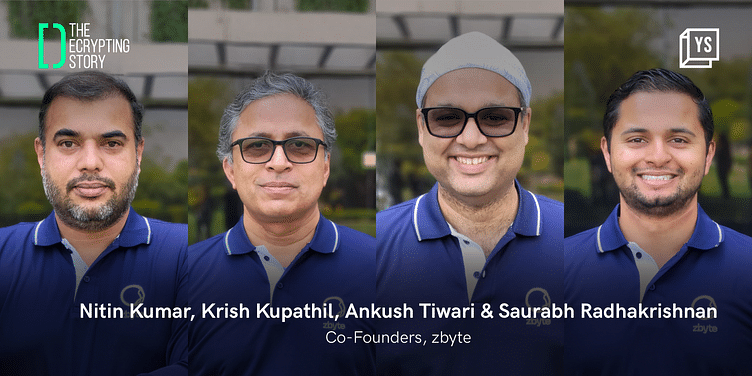 zbyte is a Web3 startup that enables developers and enterprises to build decentralised apps (dApps) on existing protocols.

Blockchain infrastructure startups are heating up as industry fervor brings more developers and users to the space. The latest startup to grab investor attention is ﻿zbyte﻿, a decentralised platform that enables developers and enterprises to build decentralised apps (dApps) on existing protocols.

Founded by Nitin Kumar, Krish Kupathil, Ankush Tiwari, and Saurabh Radhakrishnan in 2022, the startup recently closed $10 million in a round led by private investors.

Unlike centralised apps, dApps run on blockchain or peer-to-peer (P2P) network of computers instead of being handled by a single computer. They are open-sourced, have public database records, and employ crypto assets to safeguard networks.

However, one major issue with dApps is the lack of developer-friendly platforms, where developers can create these apps with decentralisation as a fundamental tenet. Another problem is that many Web2 businesses don’t seem to be able to use dApps or scale their operations to Web3.

Co-founder Ankush tells the Decrypting Story, “We view Web3 as the OS (operating system) of the future. We are working to build the first decentralised platform (dplat) and we are building a dApp store, where the developer ecosystem, large businesses, and the consumer world will realise the power of this space.”

Adding to this, Nitin says, “We are building the necessary tools and a low-code, no-code (LCNC) interface that connects users to the current Web2 systems. We see our platform as a simple button to click and navigate from Web2 to Web3.”

The dApp store is currently in its pilot stage with few enterprise customers.

The co-founders come from enterprise background, having known each other for a long time.

Ankush says, “We were involved in the Web2 and mobility spaces. One day, it dawned upon us that Web3 ecosystem is excellent, and many organisations are engaged in Web2 innovation and are highly interested in exploring and utilising blockchain technology. However, to build on Web3 is not easy as it would need more tools, and the developer community didn’t seem to be confident. Hence, we launched zbyte.”

The Puerto Rico-based startup has a team of 40 members, including the co-founders.

The startup is building a low-code, no-code platform, which makes it simple for developers to build decentralised apps.

Ankush says, developers can design a smart contract with a simple drag and drop option. “Building dApps on Web3 is quite challenging for developers because one needs to be familiar with blockchain programming languages like Rust, Haskell, and Solidity. We are building zbyte to democratise access by allowing any developer to develop dApps by using a simple low-code, no-code interface. With this, the developer need not possess these complex languages to build dApps.”

Like most Web3 startups, zbyte too believes that open sourcing codes would help the startup achieve decentralisation.

Ankush says that blockchain adoption in the enterprise market is still in its nascent stage. In order to help Web2 users scale their enterprises in Web3, the startup is adding more identity connectors, cloud services, and constructs.

“For instance, in the Web2 space, individuals depend on email, but in the blockchain world, users focus on wallet and public and private address. In order to connect Web2 and Web3, we are building hundreds of connectors, and developers can connect to Web2 tools like Oracle, SAP, and a whole bunch of Microsoft systems, including Microsoft Azure,” says Nitin.

With this, if a developer is using Web2 software like Salesforce or HubSpot, they can seamlessly adopt to Web3 without any hassle, he adds.

The platform supports multi-chain feature, and is currently collaborating with around six blockchains to facilitate dApp across many communities.

Ankush says, there are many Layer 1 protocols like Ethereum, Cardono, Avalanche, Casper, and others. But all these operate individually. “Our goal is to provide a single platform that combines all of them, so that businesses and developers can make the best use of the technology. We will let developers and enterprises decide which blockchain best suits their use case,” he adds.

The startup believes NFTs can solve issues that are intractable by conventional software. To ensure enterprise distribution, the startup is offering enterprise NFTs as well.

“We are adding interactivity on top of the NFTs. The value of the NFTs could be anything—it could be a ticket to a movie or an event. It could be something you could trade on OpenSea or other marketplaces as well. There are multiple use cases of NFTs, and we will let the enterprises decide how they want to use it,” he adds.

Speaking about competition, Ankush says, there are not many startups in this space. “There are centralised Web2 apps like Bubble, Outpost, and Zapier, but there aren’t any scalable Web3 dApps that we see as a competition. But we believe many enterprises will emerge in this space in coming days.”

According to Nitin, “We are building the world’s first dApp store so that consumers can easily find dApps and have more control over it.”

In centralised app stores, users discover apps by browsing categories, reading descriptions or user reviews. But Nitin says, dApp store will provide users logical and data-driven criteria and help them decide whether the user should download a certain dApp.

In the Web3 space, when a developer builds dApps, there is no avenue for the developer to upload the dApp. But on dApp store, developers can upload their app and then app economy kicks in. “If somebody likes the app or enterprises use the app, the whole ecosystem benefits out of it,” Ankush says.

After downloading dApp, users can carry out transactions inside the dApp by filling out smart contract templates made by the developer and can transact using the utility token, known as the zbyte token ($ZBYT). The platforms earn revenue through these transactions.

All fees related to using the zbyte token, including those for deployment of infrastructure, transactions, and paying for paid dApps, must be paid in $ZBYT tokens. Through a fiat ramp or exchanges, users will be able to purchase tokens directly from the platform. The revenue made on the platform will be shared with the developers.

The startup has two revenue models–non-profit and for-profit. The platform will be managed by zbyte foundation, a not-for-profit organisation, which will manage the revenue of dplat and the dApp store. The $ZBYT token will also be managed by the foundation.

Ankush explains, “The foundation is still in the planning stages and will be shortly launched. NGO’s will see to it that anyone using or investing in our token is fairly compensated. The more the platform is used, the better it is for supporting communities and developers.”

Speaking about for-profit model, Ankush says, “We have a for-profit strategy to introduce NFTs produced with dplat to the enterprise market, mainly aimed at CMOs worldwide. Our potential customers are Fortune 500 companies, large enterprises, and companies interested in asset tracking.”

The co-founders say they have received positive reaction from insurance, telecom, and OEM companies as of now. Big tech giants like Microsoft have also come forward to collaborate with the startup.

zbyte is now in talks for collaboration with Layer 1 protocols and large tech companies. The startup is planning to publish its open-source version in the next few months.

It also has plans to launch its native, public token ZBYT in the fourth quarter of 2022. “We are also planning to launch our dApp store by the end of the year and we will list our Zbyte token in the exchanges,” says Ankush.

ONDC to launch beta testing in Bengaluru on Friday